Before Stu and I threw down for a game of Impetus last night, Marc brought along some Show & Tell - two units of longbowmen for his English army. I thought you folks might enjoy seeing them. As you can see, one unit is painted in the livery of his commander-in-chief. 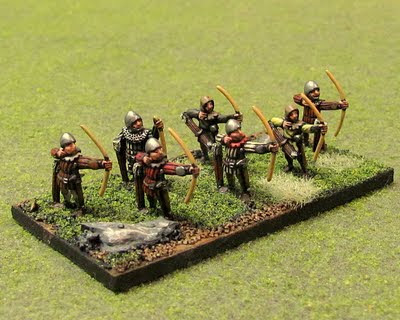 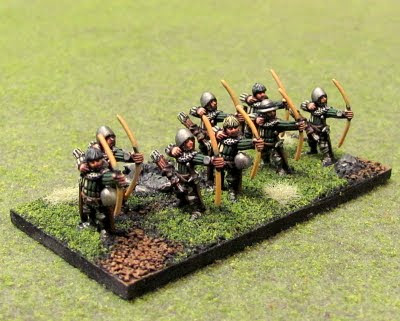 Along with his unit of hobilars I posted a little while back, these guys make a fine start to his army. Marc seems to be in high gear with this army. I won't be surprised if we are playing some small 200-point games in the next month or so.

I finally primed a largish batch of Slavs a couple of days ago, so I'll be getting that project moving as well. I looked at some of the cavalry I had and realized that I could field two or three units of Avar noble cavalry. Thanks to this discovery, I've decided to use my Slavs as part of a larger Avar force. I may "acquire" the necessary light horse miniatures for Father's Day. Anyway, I'm off to prep up some cavalry while enjoying my Sunday morning tea.

My painting table's been pretty quiet for the past month or so. Busy at work, busy at home - you know the drill. This week I thought, "enough is enough," kicked myself in the ass, and started painting some 15mm Slavs for Impetus. 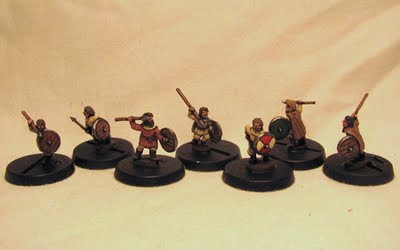 The photo is a little on the dark side but I uploaded a fairly large version so click to see more detail. The miniatures are Old Glory 15s and they are really great models. I've heard lots of complaining about OG miniatures (mostly their 28mm, but also about their 15mm as well), but I don' t see the problem. These miniatures were sculpted with painting in mind. They are one-piece (read: no shields or spears to attach) and each code comes with quite a number of poses. I should mention, this 15mm collection was given to me by a very kind reader. Frankly, now that I see how nice they are (and how many there are) I will have to contact him and retroactively offer him something in trade.

As to the paint scheme, I chose to stick with primarily creams, beiges, and browns for the clothing and to paint the shields as plain wooden planks. The majority will be armed with javelins and axes, but I'll sprinkle a couple of swords and painted shields in just to represent the few professional warriors in the bunch. As it stands right now, the first 400 points of this army will consist entirely of javelinmen units (FL-light foot) and archer units (S-skirmisher). Combine that with a Poor command structure and I'll be left with an army that plays VERY differently than the balanced Free Company army that I've become used to.

For now, this project will take front and center stage. I've simplified my usual method and, in many cases, I've only added one highlight to the base colour. I've decided that every army I paint doesn't have to be a showcase army. With any luck, this one will come together fairly quickly. Stay tuned. 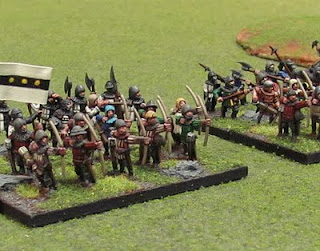 After driving Stockwood and his mercenaries across the Milanese border, Austrian general Karl Von Dertflinghan and his Milanese companion Francesco Prosciutto garrisoned the region and lapsed into a position of comfort and safety. As the seasons changed and Spring came around once more, Prosciutto was alarmed when one of his scouts galloped into his border villa with his trumpet blaring. The Free Companies were on the march again and, much to Prosciutto's dismay, mercenary veterans were converging with new recruits from France. With less than a fortnight to respond, outriders were sent throughout the Duchy to deliver the summons. Noblemen and their men were mustered near the northwestern border and, on a sunny morning in May, Stockwood's archers formed battle lines and prepared to face the defenders of Milan.

For this battle Chris and I laid out a few hills but otherwise, kept the table as an open field. That's one of the great things about Impetus - you can play a game with little to no terrain. The interaction of the different unit types makes for engaging gameplay, even with flat, featureless terrain. 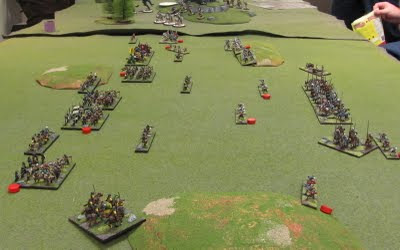 As is customary, both generals sent skirmishers across the field to harass the enemy troops and to counter enemy skirmishers. In this photo, Karl Von Dertflinghan (Austrian general in the employ of the Milanese) watches as his crossbowmen are bested by mercenary crossbowmen from France and Burgundy. 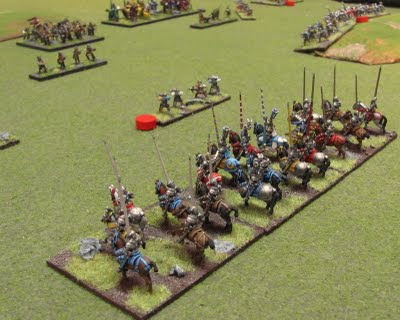 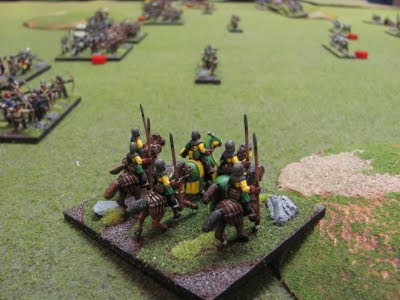 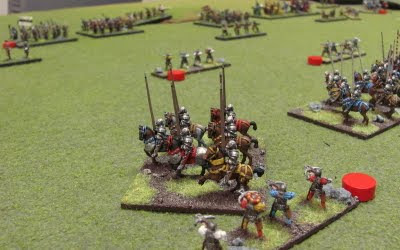 The first unit found themselves overwhelmed by mercenary crossbows and longbows and, by the time they reached Deere and his men, they were so disordered and worn that they were easily dispatched. 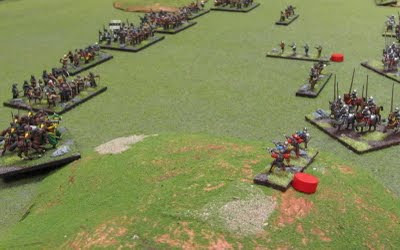 Meanwhile, Stockwood's veteran longbow line rained down death from a distance on the Milanese. 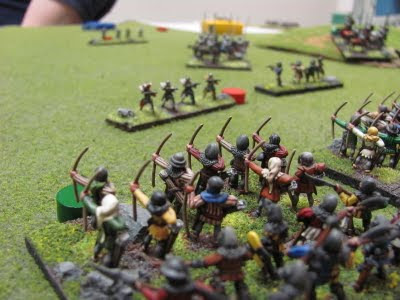 The countering Italian knights were either slain or driven from the field by Deere and his men. 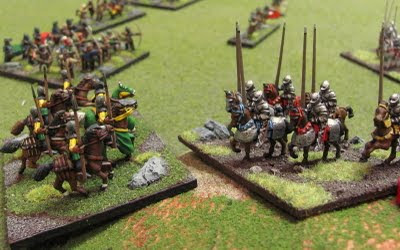 Worn from battle (and seeing more Italian knights approaching), Deere commanded his horsemen to re-order and fall back. 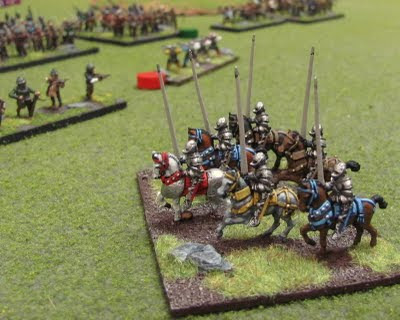 Stockwood, seeing Deere's signal, sent his veteran men-at-arms through the line to counter the second wave of knights. With archers' assistance, the men-at-arms saw the knights routed from the field. 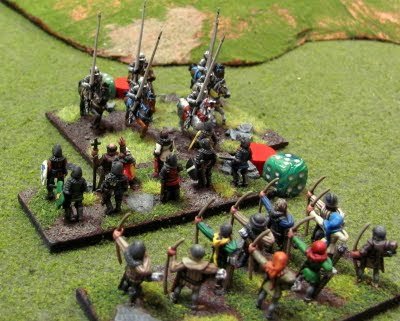 While the Italians were suffering defeat on their center and right flank, their left flank was crumbling under the bumbling leadership of Prosciutto (who had no doubt grown soft during his off-season). 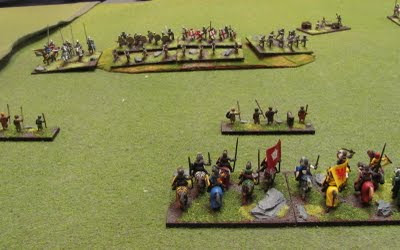 The impetuous Rodger of Lynn led the mercenary knights in a head-on charge towards the Milanese right flank. 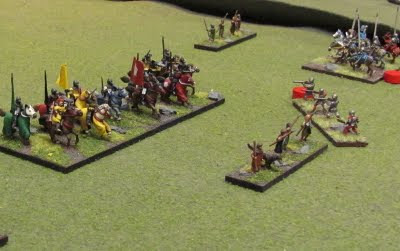 Beauregard LeFleur wheeled his unit and crashed into Prosciutto and his knights. Both sides fared pretty badly in the exchange, however, the Italians lost one of their generals and, with no leadership, the entire command suffered. 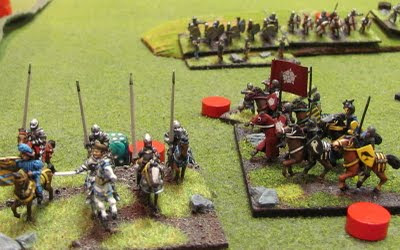 Meanwhile, Rodger of Lynn, refusing to be outdone, went straight up the middle and engaged the Milanese footmen in a fierce exchange. It was another bloody affair and, when the dust settled, Rodger and his men, in spite breaking the enemy line, fled the field in rag-tag fashion. 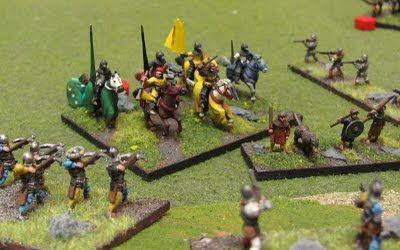 When all was said and done, Stockwood and his well-rested (not to mention well-reinforced) mercenaries won a solid victory against their Milanese adversaries. With the north-west Milanese border occupied and reinforced, Stockwood was finally in position to undertake a major military operation to the southeast.

It has been too long since Chris and I had a 15mm Impetus match. However, Impetus is now on the rise again. Marc is painting (finally) his medieval English, Chris has just primed some 15mm Norman infantry, and Ken has announced that he is ordering miniatures to build a Burgundian army. As I've said before, it's become a well-loved game in the group and Impetus isn't going anywhere anytime soon.

Just to put it all in perspective, Marc is the guy in our group who plays (a) Cryx in Warmachine, (b) High Elves in Fantasy Impetus, and (c) The Mad Doctor in Chaos in Carpathia. Well, this time he's done something that excites me more than any of those things. He's finally come out of the gate with his 15mm historical army for Impetus. 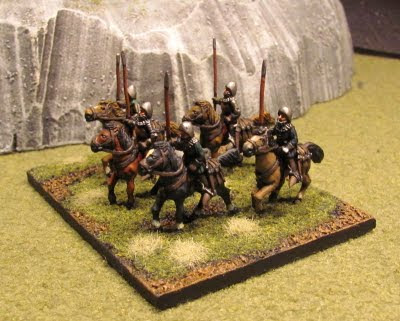 Marc has enough Corvus Belli and Feudal Castings miniatures to build a 400-point English army. He showed up at my house last night with a unit of hobilars painted and based. I like the muted colour scheme (they are commoners after all) and, although they are a humble VBU:4, I think their being faster medium cavalry will help with flanking maneuvers against enemy infantry.

As I said more than once on this blog, Impetus is far and away my favourite miniatures game. I love the rules, I love the aesthetic, and I love the perfect balance of relaxation and depth of play. Now that Marc has started his army, there will be four players in our group with 15mm historical armies. Huzzah!