I've had this 15mm Hovels bridge lying around for almost two years now. Last week, Marc and I devised a simple "cross the river" scenario for Impetus and played the scenario with one river section designated as a ford. I realized that a bridge would be far cooler, hence the new paint job. 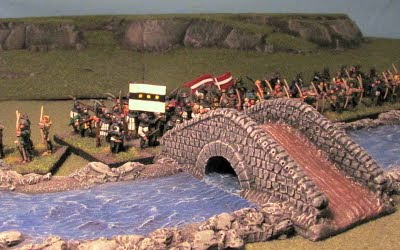 I decided not to base the bridge in its own section of river since I want to be able to use it along with multiple river collections in our group. Instead, I built a base for the bridge and sculpted some water flowing under it. It doesn't match up perfectly but it gets the idea across as far as I'm concerned.

As for the Impetus scenario, here are some random points Marc and I came up with during and after our test scenario last week:


Anyway, that's it for the time being. When we've played some more games we'll hammer down the details and put the scenario out there for other Impetus players. In fact, our goals is to make up half a dozen such scenarios so that, in time, we aren't always playing straight ahead pitched battles.

Although not an official chapter in the Curse of the Dertflinghans campaign, I thought you folks might like to see a few photos from our Chaos in Carpathia game last night. We were playing at Chris's house and, after a long Summer of little to no wargaming, Chris and I decided to dust off the Gothic Horror models and get back at it. We played a good old Seek & Find scenario with my Hungarian Monster Hunters pitted against Chris's foul Nosferatu warband, the Red Brotherhood.

My Expedition Leader, Count Konrad von Krumm, set out into the forest with his son Helmut at his side. Villagers speak of ancient stones scattered through the forest near a ruined watchtower. These stones are rumoured to be covered with ancient engravings which might hold a clue to the origins of the Brotherhood and their dark master. 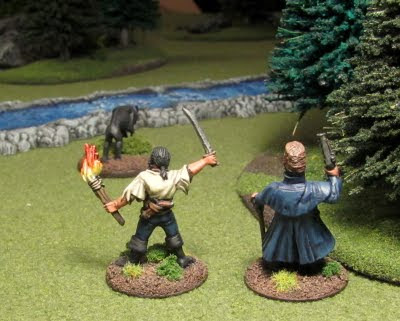 The Master's closest (but certainly not most trusted) servant Gideon skulked in the cave near some of the engravings. 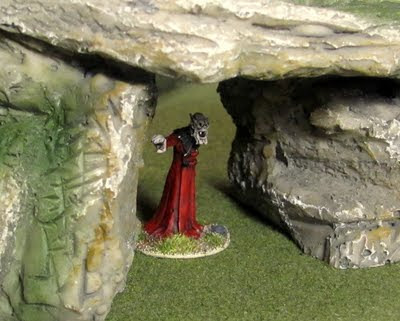 Meanwhile in the woods, Dr. Franz Grunberg stumbled upon an ancient stone criss-crossed with engravings. "I say Bjorn, be a good fellow and keep watch while I take a rubbing." 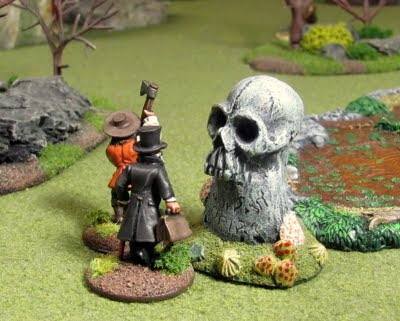 Albrecht, another of the Brotherhood, hid in the shadows of the ruined tower, his supernatural senses aware of a human presence in the woods beyond. In the game, just as Albrecht was about to search the objective at his feet, Ernst Holdt skewered him with a fatal crossbow bolt. Sadly for Chris, this bad luck was only a foreshadowing of things to come. 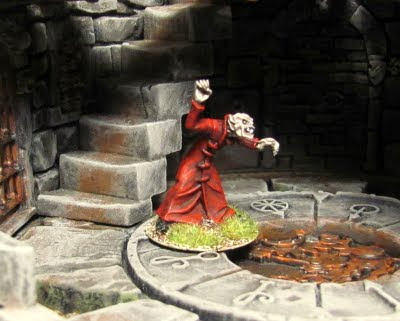 In an attempt to jump the river and charge my leader, the Master Vampire missed his footing and fell into the river which carried him violently downstream into the marsh - not his finest moment. These are the scenes that never make it into the movie. 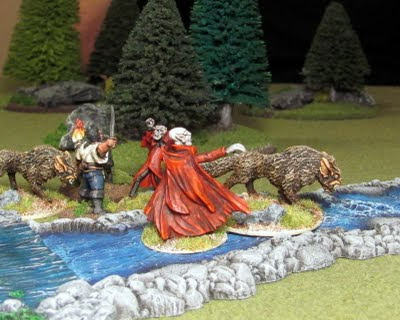 Eventually, the Master changed into a mighty beast and burst onto the bank, savage and, let's face it, a little embarrassed. Helmut von Krumm, who was filled with bloodlust after just defeating one vampire, faced the beast with equal savagery. When it was all said and done, Helmut put the creature down. 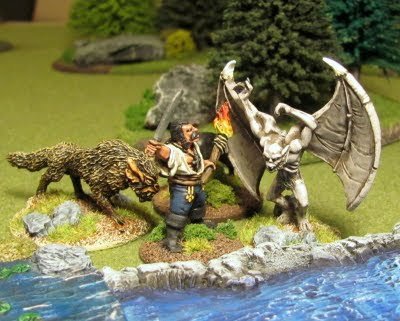 With the rest of the warband defeated, Gideon made a last stand against Lazlo the Wanderer. Realizing that he was on the bottom wrung of the engagement, he took the form of a great bat and fled the field. 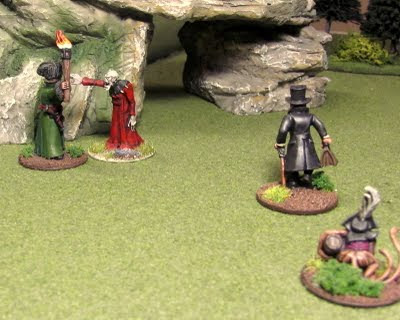 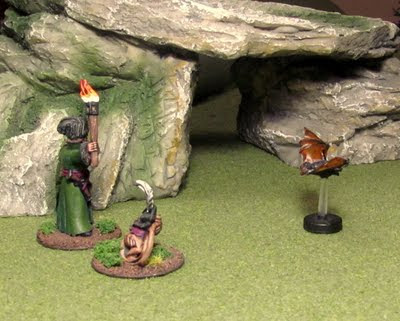 What a battle! My Monster Hunters performed like a well-oiled machine. It was one of those rare games where my slayers spent the game slaying while my academics were successfully finding objectives. In the end, I had found all four objectives, slain the Master of Evil, and still held the Female Victim for a whopping total of six victory points. Chris took the overwhelming defeat like a gentleman.

With three years of Impetus gaming under my belt, I've finally begun to get tired of using colored wooden markers for marking DISORDER and OPPORTUNITY. A month ago or so I ordered some 15mm medieval casualty minis from Essex. They're all based on round GW plastic bases. 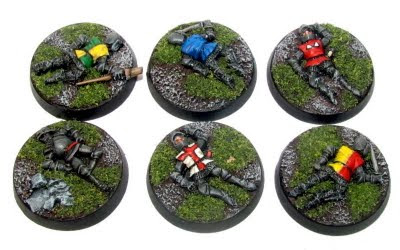 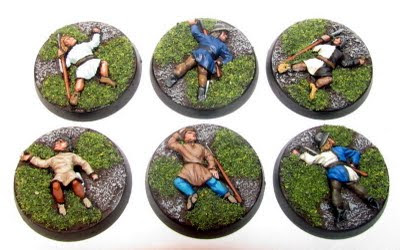 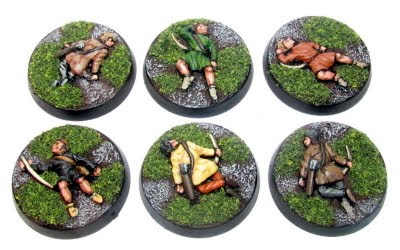 With just over 20 units in my Free Company army I'm hoping that I'll never need more than 18 disorder markers. In any event, these little dioramas should greatly improve the look of our Impetus games.