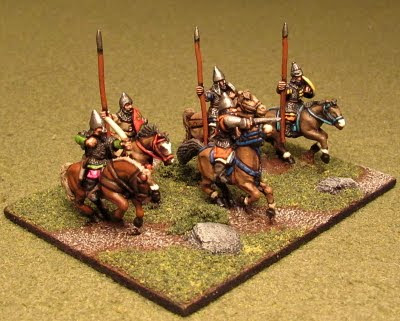 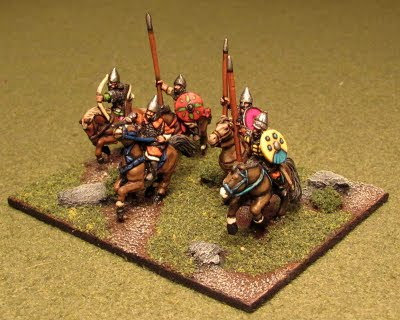 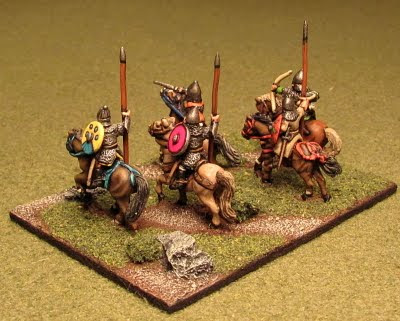 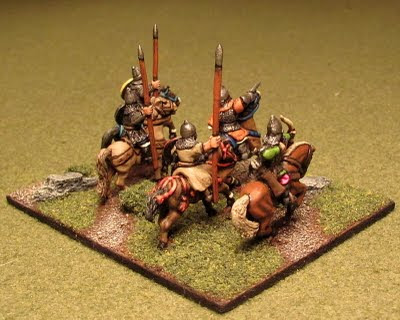 After a pretty slow Spring in the painting department, I finally finished painting this unit as I entertained myself by watching Marc and Chris play Impetus. I'm still waiting for someone to come along and tell me which manufacturer made the figures. I have enough minis to to two more like this and one unit that will look slightly different, which I'll be explaining away as allies.

As I mentioned a couple of posts back, I don't know anything about Avar dress or armout. What I do know is, as a nation, they were a melting pot of many nations as opposed to one ethnic group. I'm using this fact to explain away any historical inaccuracies.

I've been picking away at some more Avar cavalry and I thought you guys might like to see the most recently finished one. 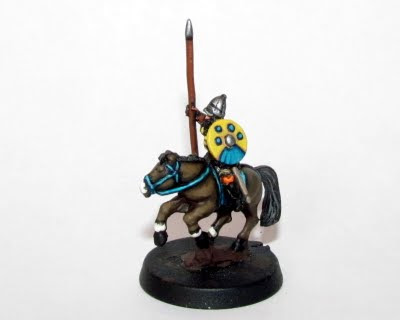 Please keep in mind, the colours and shield designs are completely make-believe. I don't know much (read: anything) about the Avar nation. As I said in the last post, if you have any idea who makes these models please let the rest of us know. When I complete more minis (or maybe a full unit), I'll try to get some more photos up.

After spending what little spare time I had over the last couple of weeks prepping and priming, I finally took some time today to throw some paint on a 15mm cavalry model. This fellow will be fielded as part of a Noble Cavalry unit for my up-and-coming Avar Impetus army. 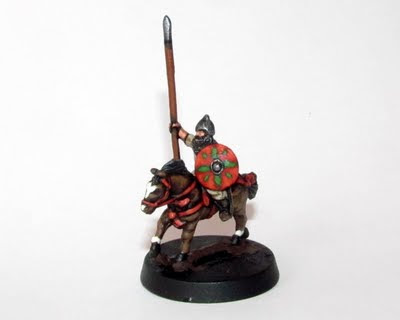 This army will consist primarily of medium bow-armed cavalry, Slavic infantry (in the form of FL and S units), and a few units of bow-armed light cavalry that are currently en route from Khurasan Miniatures.

As one gent on TMP kindly pointed out, it's rather questionable whether Avar cavalry used shields. I figure that, since the Avar nation was really a conglomerate of different Asiatic ethnic groups, I'll go ahead and mix these guys in with my shield-less horsemen and hope for the best. When all is said and done, I'll have a 400-point raiding force that will be made up fairly evenly of bow-armed horse and javelin-armed infantry. As an Impetus player (historical considerations aside) it will be quite a fun army to play - very different from the FP, CP, and T units in my Free Company army.

Last time Stu and I played, his army was defeated by Stockwood's veteran force. Eager for a chance to take revenge on the infidels, Stu brought his Arab-Turk army out last Saturday and we threw down on a 6x4 table. Early on, the bulk of Stu's army was facing my knights, while my infantry were facing Stu's tiny infantry command. In turn two, one of my units of impetuous cavalry made an impressive run into Stu's line, destroyed a unit of Ghulams, and almost caught a unit of horse archers. (top right - unit with blue standard) 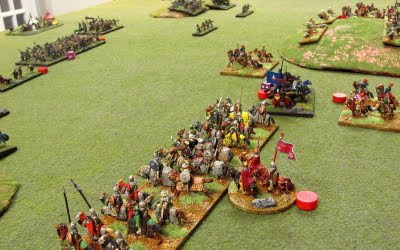 While Etienne and his knights were over-extending themselves, my Breton javelinmen were having a field day. They caused some substantial damage before they were run down. Things seemed to be going in my favour. 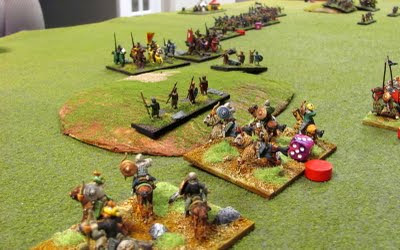 My other two units of knights, although not as destructive as Etienne and the Bretons, had caused some damage and succeeded in locking most of Stu's cavalry line in combat. 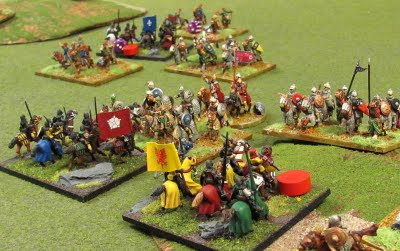 As the fight raged on, the Arabs were clearly coming out on top and it was time for me to concoct and to enact plan B. 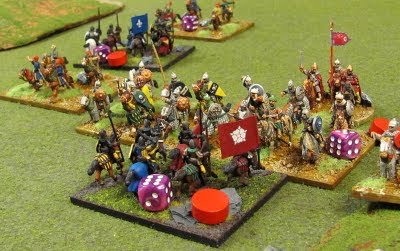 I started wheeling and re-deploying large contingents of my infantry with the hopes of having a shower of arrows ready by the time Stu's cavalry reformed and came for my infantry line. 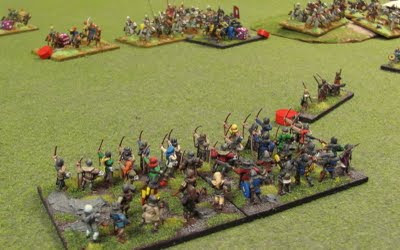 Sir Jonathan Deere tried to make it across the field to help but, alas, was interrupted by meddling Turkish horse archers. 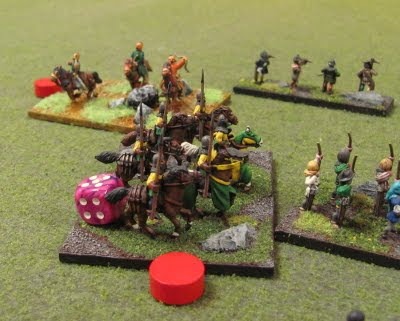 By the time my line had reformed, enemy horses were swarming my flank. Furthermore, with all of my knights taken out, I was dangerously close to my break point. 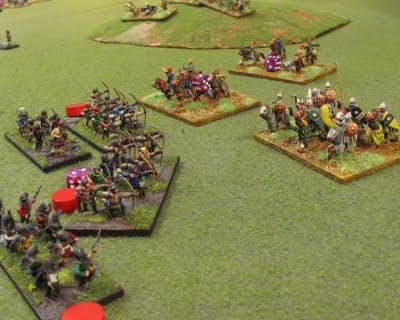 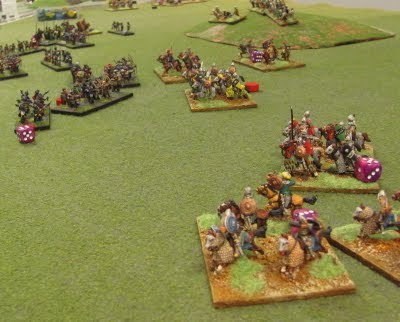 The unit that lost me the game. The horse archers teamed-up against my unit of longbows, took them out and, in doing so, took me below my breakpoint. 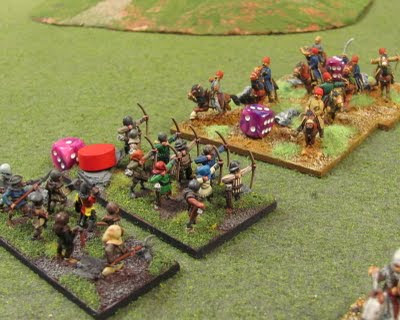 It was a tremendous game. In fact, when you are 95% familiar with the rules, I find Impetus to be a very rewarding game, win or lose. Not that it hurts to win, mind you. In fact, I shall try to do just that next time we play. Until then...