With fresh copies of the SAGA rules in hand, Chris and I decided to start learning the rules using miniatures from his extensive Lord of the Rings collection. Chris played Numenor (Anglo-Danish) and I played the Goblins (Welsh). Here's the basic run of how things went. Lessons and impressions at the end. 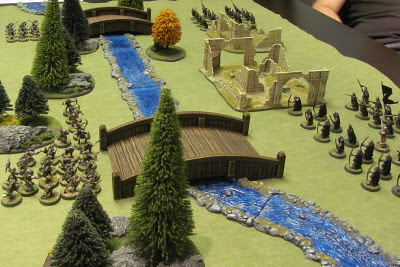 We played the river crossing scenario and used a 3x4 mat as outlined in the scenario. Chris and I each brought our Armorcast bridges. 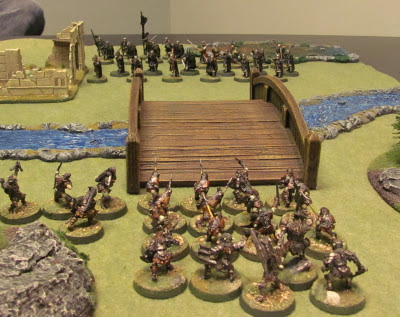 The bulk of the goblin force prepared to cross the right bridge... 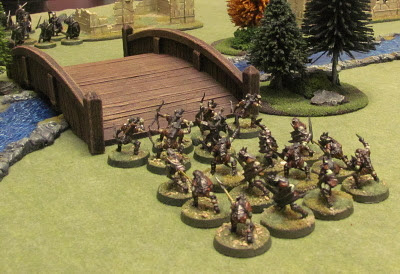 ...while a large unit of 12 warriors and some levies were deployed near the left. 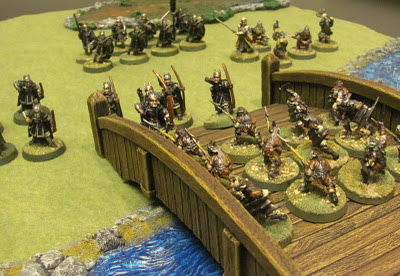 As the Goblin (i.e. Welsh) player, I used the Taunting ability on the battle board to draw the Numenorean archers towards the bridge. I charged my warriors in and caused some serious damage. 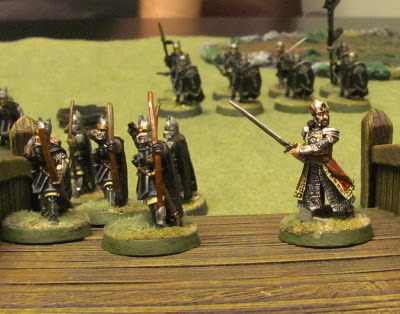 In response, Chris sent Isildur and his elite bodyguard in to deal with the goblin warriors. When the smoke cleared, both units were wiped out and Isildur remained victorious on the bridge. 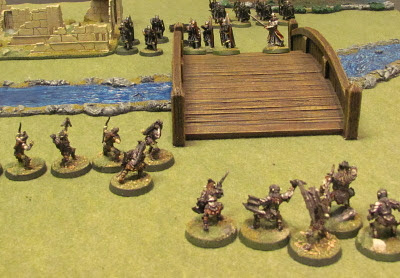 My goblin warlord and his elites prepared to counter-attack. 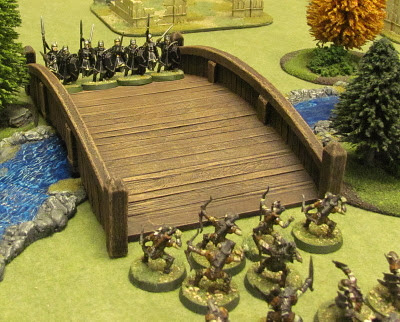 Meanwhile, the other bridge was less active for both sides. I used archery to try and hold back the Numenorean advance. 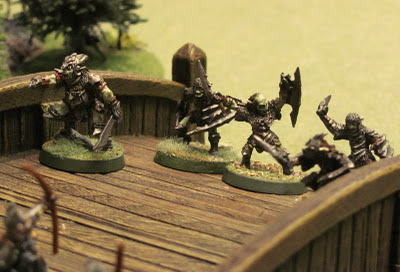 My warlord and his bodyguard stormed the bridge. 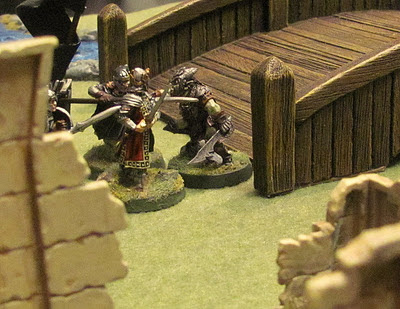 The goblin bodyguard died but, in true goblin fasion, my warlord charged across the bridge and tried to take down the enemy warlord. As expected, the goblin warlord died... 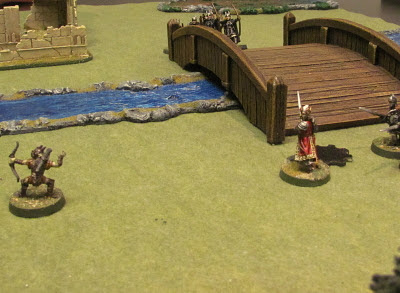 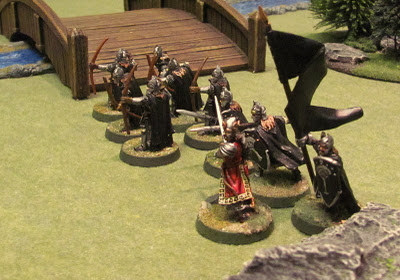 The victorious warlord and his men. 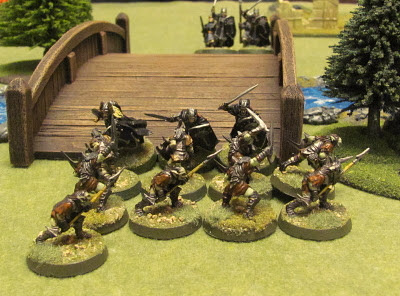 My warriors were doing a good job of holding the Men back but, by this point, the game was over and it was too late. It was a crushing victory for Isildur and his men.

SAGA is a brilliant game - let's just get that out there first. All of the hype is well-founded. Here are some basic observations from the two games we played:
If you're on the fence about this game, get off and go buy it. I expect to get an awful lot of replay from this one. I think that the guys from Tomahawk have hit on a winner. I could easily see a series of rules in the future covering other historical periods.

Although Marc and I have been playing Impetus regularly throughout the Summer and Fall, I've been quite delinquent in the battle report department. Now that his HYW English army is nearing the 300-point mark I thought that I should break out the camera. 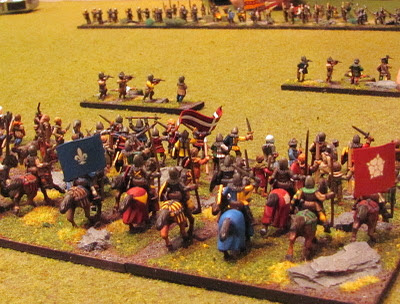 I tried a very different type of force. I left my usual commander-in-chief (James Stockwood) at home and instead fielded a 300-point cavalry-heavy force led by Rodger of Lynn. 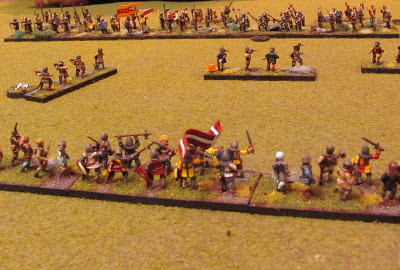 My secondary command consisted of a unit of dismounted men-arms (led by Sir Peter Redgrave, a Poor general) and a bunch of rabble in the form of peasants and skirmishers. 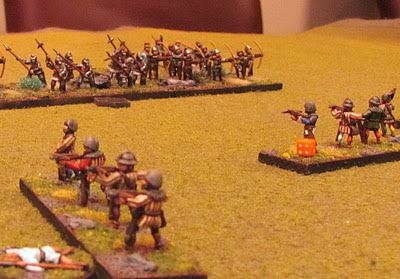 Redgrave's crossbowmen dashed forward in an attempt to harass Marc's main line. I had mixed results.
﻿ 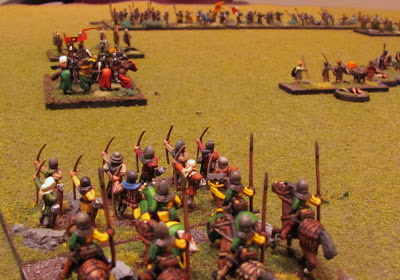 The game really started to get interesting on my left flank where Sir Jonathan Deere stood at the ready. In a surprise move, Marc's knights dashed across the field in an attempt at flanking my main cavalry line. 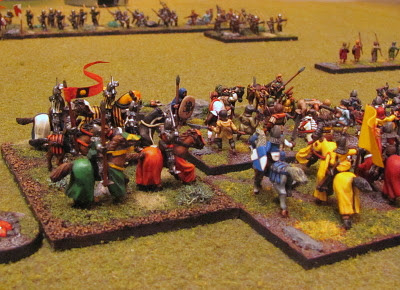 Marc managed to make five moves in a row. In other words, he moved once, twice (and passed a 3+ Discipline check), a third time (passing a 4+), a fourth time (you guessed it, a 5+) and then made it into my general's flank. He arrived disordered but what an incredible run! 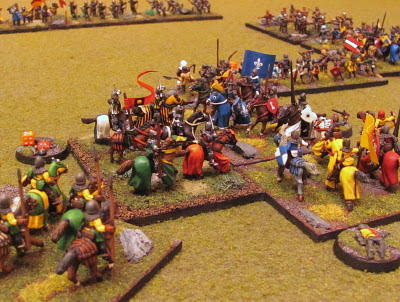 Luckily, Sir Jonathan Deere and his men-at-arms were in good order and charged towards the enemy. They managed to arrive quickly, before the battle had turned against their comrades. Before long, the English knights were overwhelmed and the mercenary line reformed and continued their advance towards Marc's main line. 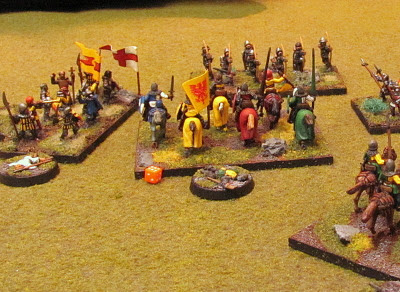 A couple of units of my knights (including my general) crashed into the English line and almost destroyed a couple of key units. Sadly, the English foot hung on by a thread. 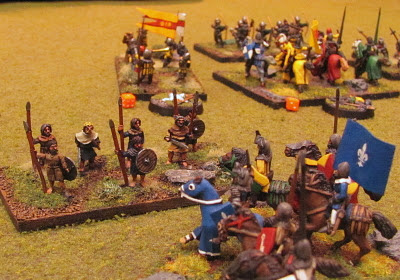 Marc took advantage of the situation and sent his newly-painted Welsh Spearmen dashing towards Etienne and his knights. In an unfortunate turn of events, the knights were routed and my breakpoint had been reached.

It was one of the great Impetus games of my wargaming career thus far. Marc went home all fired up to keep painting. At this point, he only has a few units of archers and spearmen left to paint and then we'll be back to playing our usual 400 point games.

It's been a while since I've had a proper update, a "state of the table" sort of post, so I thought that it was about time. Here's my painting corner at this moment in time. 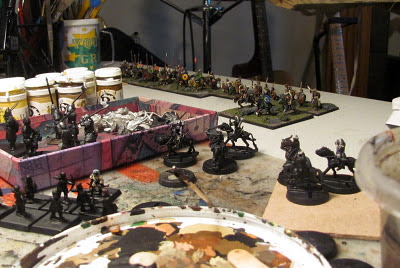 Off in the back you can see my Avar army starting to come together. I don't want to post any close-up photos until I have a respectable chunk finished. Suffice it to say, I'm getting tired of painting cavalry (the last of which you can see in the right foreground) but I quite enjoy painting the unwashed Slavic masses. Frankly, there may be a warband or pike army in my future.

In the tray to the left you can see my next batch of Viking Hirdmen and my Warlord. My SAGA rules arrived in the mail yesterday and to jump on the bandwagon, I think that all of the hype was well-deserved. It seems like a really brilliant miniature game and, given time, it will likely become quite a wargames success story for the author. In any event, I am trying to keep my patience intact as I work towards finishing a 4-point army.

I've also done some cleaning out lately and I've realized that the only real "not fun" painting backlog I have left is a Thunderhead heavy warjack for Warmachine and some goblin spider riders for my Impetus Fantasy army. To clarify, they'll be fun to play but they're just not where I am as a painter these days. They're definitely in the "get them done" pile.

We're in the process of preparing to purchase a new home within the next 12 months or less so in the meantime, I'm making due with a small painting corner in the basement. This lack of space is why you've not seen any elaborate Gothic Horror tables in the recent past. Fear not, we will be playing again soon. Furthermore, Chris has painted a bunch of stuff for the Pike & Shotte Zombies game and Marc is creating an entire 4x4 urban table using Worldworks paper terrain. He plans to lead us adventure gamers in a Bladerunner-ish game of some type in the new year.

That's pretty much where everything is at the moment. As I work towards having all of my projects finished before Xmas (which I'm ahead of schedule on this year, so it's looking up) I find my mind wandering to Xmas presents of the geekly variety. A new Impetus army? Urban stuff? Maybe more terrain? Lots to ponder.

Thanks for reading,
JET
Posted by JET (aka Jason) at 6:06 PM No comments: