Last year I created a series of Secret Objective Cards for Chaos in Carpathia and we've been playtesting them ever since. Now that all of the wrinkles are ironed out, I thought it was time to make a sexier version of the cards. 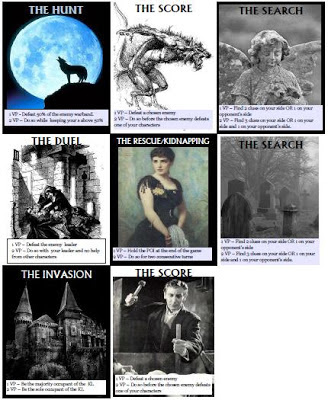 For those who tried out the original text-only cards, you can see that the same original eight cards are still here. In addition to the graphic addition to the cards, I've reduced the amount of text. The next stage is to create a two-side playsheet (one per player) that explains game-set up, the objective cards, and the warband-special rules. I should have mine printed and ready for play in time for the soon-to-be updated warband lists.

Happy Halloween and, as always, thanks for reading,
JET
Posted by JET (aka Jason) at 1:34 PM 3 comments:

I don't know how I fell off the blogging wagon exactly, I just did. Tonight I got a sudden urge to check in and to assure anyone out there who still reads this thing that I am most definitely alive and that my geek life has never been better. Whatever gaming and small spurts of painting I've had over the Spring and Summer have mostly been divided between my two great loves - Impetus and Chaos In Carpathia.

We haven't played much (i.e. any) Impetus over the Summer but there is growth. Stu and I played our first 500-point game featuring his Swiss against my Free Company. You can see my new unit of English Knights below, the gents with the red shields sport the golden axes. Stu's lovely army is comprised of Legio Heroica models. 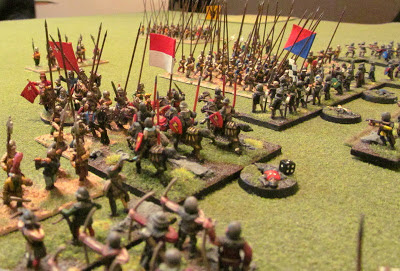 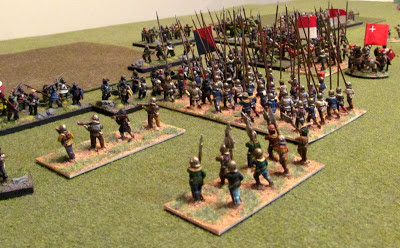 There is one other guy in the group (also named Jason) who happens to be just as big of a Chaos in Carpathia fan as I am. He is currently painting his 4th warband and, between the two of us, we have playtested and hammered out my Secret Objective and Campaign System. It's the game we just never get sick of us. In fact, you might find some recent game reports on his newish blog. Here are some shots of a game we had over the Summer. The Von Krumms, my Hungarian Monster Hunter warband, continue to be one of my favourites. 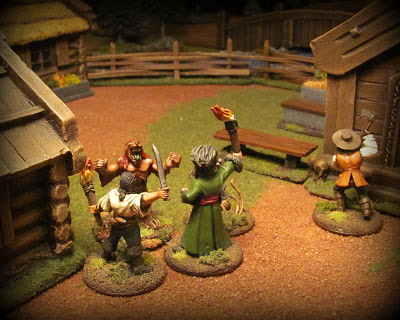 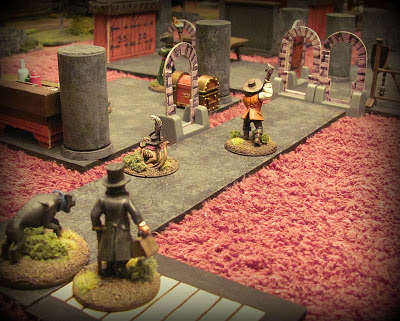 So, why haven't we heard from you lately?

Well, in spite of my love of the hobby and the games, there have been some very positive "distractions" as of late. Although my twelve-year old son spends most of his time on his scooter, making videos, and playing PS3, my two-year old requires a lot attention. Here's Jake in all his glory jamming with dear old Dad. 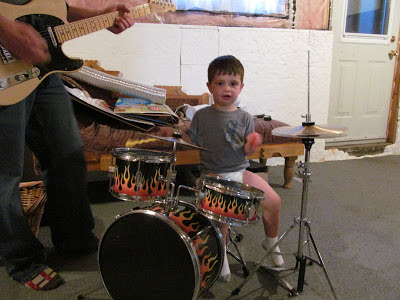 Also, we bought are first house over the Summer. The only major-ish job we took on was to develop the back of the basement area. All of the house stuff has also been eating up time. In fact, my father and I are in the throws of framing up a geek room. The final product will be 11ft x 12 ft and will have ample shelves and a gaming table.

I also am working (or rather, was working before the renovations started) on my 28mm Vikings with an eye to the Dux Bellorum Ruleset. I am in the process of "almost finishing" a number of projects including my 15mm Avar for Impetus and a couple of goblin units for Fantasy Impetus. After the geek room is ready for action, I plan on painting a Brotherhood warband for Chaos in Carpathia, the Alkemy warband I've had lying around for three years, and (no commitment on this one) a few of the guys are starting fleets for Firestorm Armada. I may give that a shot depending on what I see them produce.