I'm having some issues with my camera as of late, or at least the lighting part of it. Anyway, I'm still painting miniatures for SAGA. I now have a unit of Berserkers to join my Hirdmen in the fight against the Anglo-Danish and the Normans. 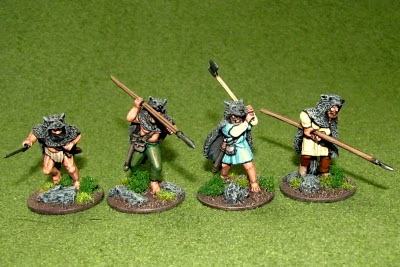 These Viking minis are the first Gripping Beast miniatures I've ever painted and, I have to say, I'm quite impressed with them. Some models are sculpted for painting and these definitely fall in that list. My favourite is the guy swinging the axe above his head.

In the meantime, the workbench is bristling with activity. I'm already basing my next unit of Hirdmen, prepping a unit of eight Bondi, and have started putting down some base colours on my 15mm Avar light cavalry. For those of you who remember, I started painting some 15mm Avars back in June but haven't written much about them since. Well, suffice it to say, I'm almost finished all six units of cavalry and all of my Slavic infantry is primed and ready to go. It's a good time to be a geek.

My apologies for the long dry spell in the blogging department. I've been back on the painting and playing wagons for a few weeks now but, thanks to a hard drive crash, my at-home computing has seriously dropped off as of late. Please accept this first unit of Gripping Beast Vikings as proof of my continued dedication to the art of geekery. 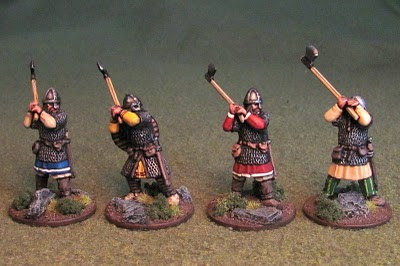 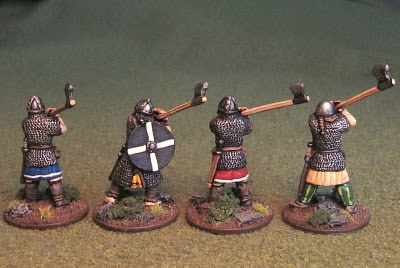 The SAGA game has been getting a lot of press lately and some of the guys in the group, me included, are patiently awaiting the arrival of our pre-ordered rules. After some pondering, I went with the Vikings for numerous reasons, not the least of which was Keir gratiously offered me some models from his collection and, as a lad, I actually lived in L'anse Aux Meadows and played "Vikings" in the sod huts at the National Historic Site.

While I'm on the apologies, sorry that one of the guys in the photos looks like an axe-wielding Santa Claus. It was unintentional and I never realized it until the paintjob was finished.

As to the painting table, I'm currently moving quite swiftly (by my standards) through my Avar army for Impetus. In fact, I've almost finished painting and basing the cavalry arm of the army. The group is just getting back into the Fall routine so I'm sure there'll be lots of interesting things to report and showcase over the coming months. Hope some of you guys are still out there and, as ever...