For the past six months or so, all had been well in Assumption. In fact, the town had been prospering and expanding with new entrepreneurs and tradesmen coming into the area to lay down roots. As a mid-sized stopover town in Oklahoma, Assumption had drawn the interest of the well-established Great West Railway Company. The company owners had to move a fair-sized shipment of cash out west in order to pay their growing multitude of rail workers. Sheriff Tom Gunne was approached by a high-ranking magnate of Great West who requested the use of the bank for a one-night stop-over. 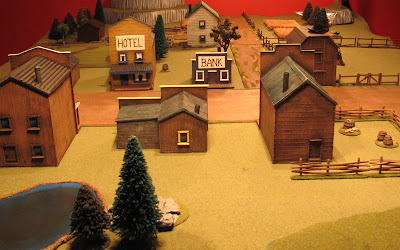 A week before the planned arrival of the cash shipment, Tom Gunne filled in Deputy Chafe on all of the details. 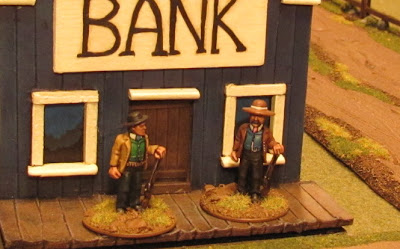 Unbeknownst to the lawmen, listening ears prowled nearby, waiting to take the tantalizing news back to their gangs. 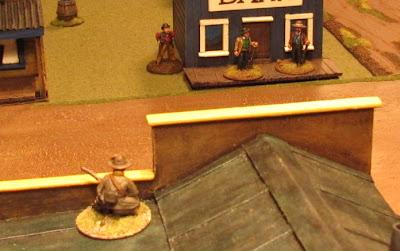 As the sun rose on the day of the loot's planned departure from the town, the Philadelphia Kid and some of the Black Cole Elgin gang were seen sauntering into town. 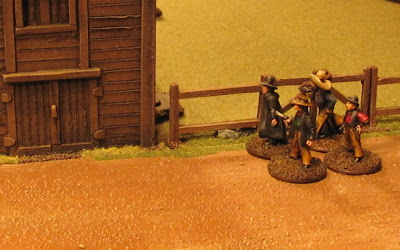 At the other end of the street, the southern boys under the command of Eustace Pilesforth skulked towards the bank. The streets seemed strangely empty, even for this early morning hour. 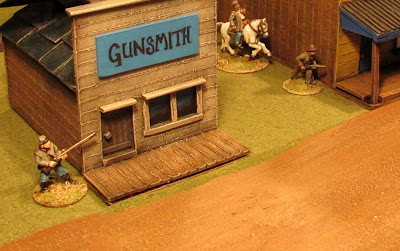 Zebulon Jackson and Enos Cartwright decided to scale the jail and to set themselves up on the roof to keep the bank covered. Just as they cleared the roof, a gruff voice mumbled through chewin' tobacco, "We've been expectin' you boys." With that, Archie mills blasted Enos off the roof and close range and prepared to engage Zeb. 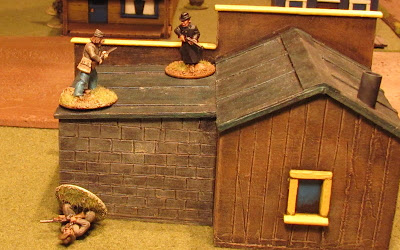 Deuteronomy McCrae ran to the jail and was just starting to scale the wall when two figures leapt out of the sheriff's window. Tom Gunne and Sam Blake took aim with their sixguns and the morning was filled with the chorus of gunfire. 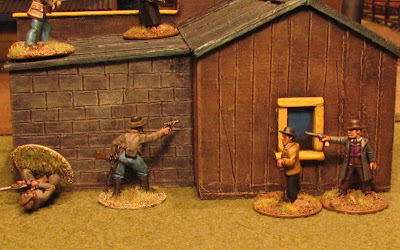 As the gunshots resounded, Abraham Stubbs was surprised to see Bill Chafe charge out of the Gunsmith's wielding a wooden club. 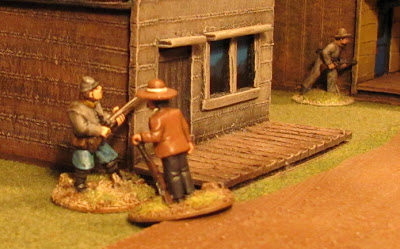 The Black Cole Elgin gang took advantage of the chaos and gunned it towards the bank. Merle Gibbs and Caesar Acosta, equipped with heavy mauls, starting slamming the stone wall trying desperately to force an opening. 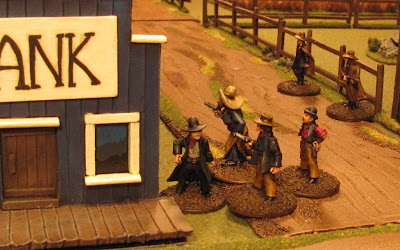 "Hurry Up!" were Tom White's last words. A rifle shot from the Sheriff Gunne blasted through his forehead and brought the infamous outlaw's career to a fitting end. Caesar and Merle kept whacking with hammers double-time. The wall was starting to give way. 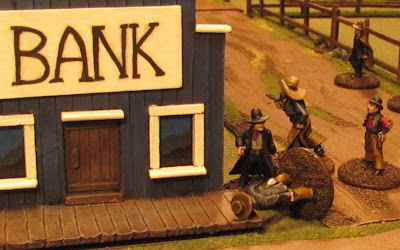 Suddenly, new voices were heard as a foreign projectile flew through the air and embedded itself in Merle's shooting hand. As the outlaw yelped in pain, he saw Jeb Hunter and the Chinaman Xiao Lou rushing out from their hiding place in the livery stable. 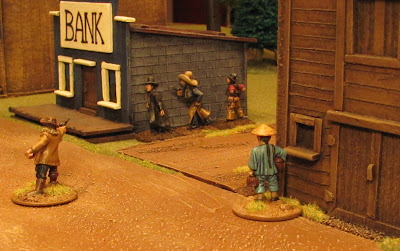 Meanwhile, the southern rifles had finished off Archie Mills with a knife to the gullet. After rolling his body off of the roof, they prepared their position. The Major had noticed that Black Cole's men had breached the bank wall and shouted, "shoot em down boys" to his men on the roof. 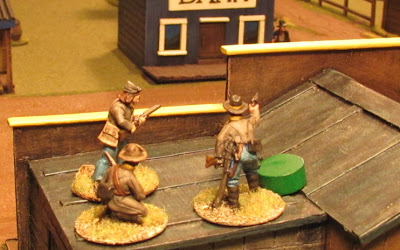 Fisticuffs was the order of the day. Under the eaves of the livery stable the outlaws brawled desperately as they tried to drag the loot out of town. 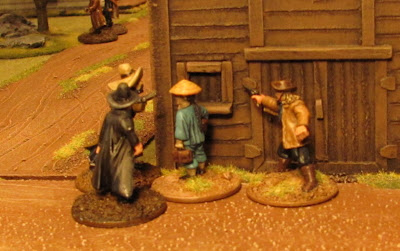 Caesar Acosta found himself no match for the oriental fighting style of Lou. With a swift kick to the Mexican's head, Lou napped Acosta's neck, and another outlaw legend died in the streets of Assumption. 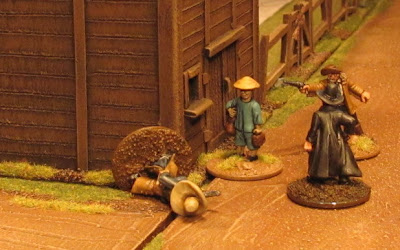 Meanwhile, back on the other end of town, Bill Chafe found himself seriously outnumbered by the Major's men. Although he was beating them back, he was alone and outgunned. 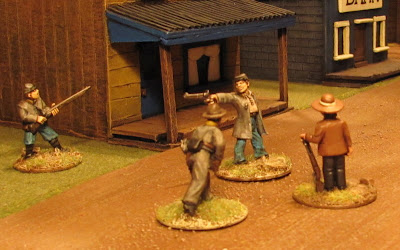 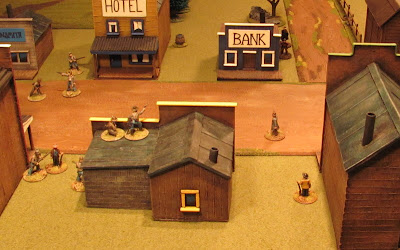 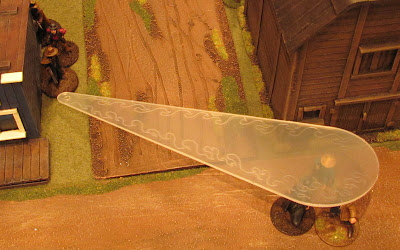 As the brawl broke up, the southern boys moved in, desperately trying to make a grab for the cash. 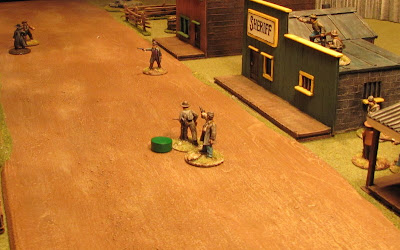 The outlaws finally had it together and were making it into the corral with the cash. Jeb put another round into Merle. The tough hombre was miraculously still standing 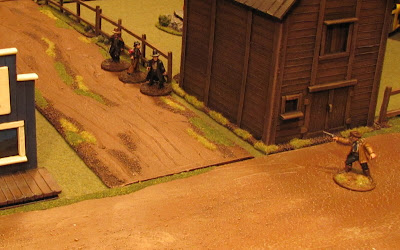 Sam Blake and Sheriff Gunne ran after the outlaws with guns blazing. 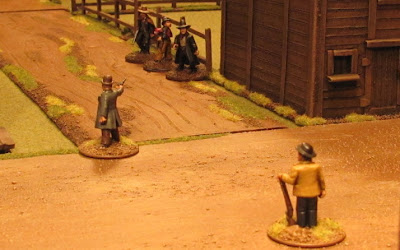 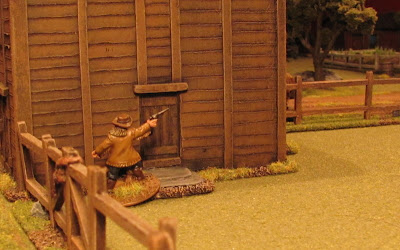 The outlaws realized that the lawman was laying in wait... Two Penny ran in put a shell right in Jeb's chest, blowing his straight out of the corral. Another man dead on the street. The boys made a final run with the loot, and just as they thought they were in the clear, one of the Major's men shot Black Cole in the back. He lay on the ground screaming, but his three surviving companions all looked at each other, and Merle quickly drew and aimed at his Cole's forehead.

"I'll save ya from a hangin' boss." Cole began to shout in protest, but Merle unloaded his hogleg and kept running. 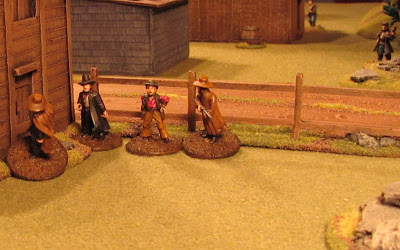 The remaining Assumption Defenders had managed to regroup and to fortify themselves near the bank. The Major, realizing that the loot was gone, shouted, "retreat," and with that, his men filed in and sped out of town. Neither the major nor his men were ever heard of in Assumption or the county again. 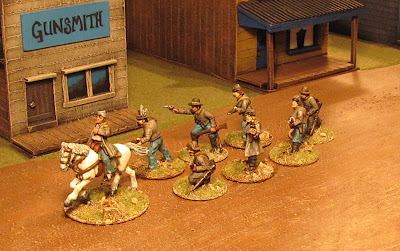 A short time later, the three surviving outlaws made their way down the back road to where the horses were tethered, dragging the loot as they went. Just before they reached the horses, Two Penny and Merle noticed that the Kid was lagging behind. When they turned, they saw him standing, bags on the ground by his feet, with both pistols drawn. 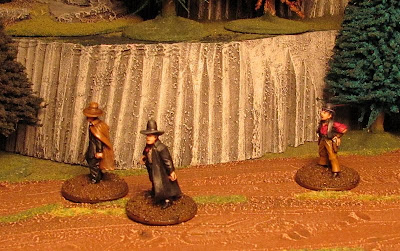 Realizing what was happening, Two-Penny went for his shotgun, but it was too late - the Kid blasted wildly and filled the city slicker with lead. Merle had rolled out of the way, and in spite of his injuries, drew his sixgun.

"Is this how you wanna go down, Kid." He yelled.

"Way I see it," said the kid in a gloating tone,"I don't need you fellers anymore. That thar money's mine, Merle. Nothing personal."

The Kid dodged Merle's shots and put two in his gullet. Merle hit the ground. The Kid began slowly dragging the loot towards the horses. As he reached the edge of the road, he heard a click. He turned, knowing what to expect.

"You'll never spend a brass tack of that loot," said Merle, who was propped up on wounded arm while aiming a shaking pistol at the Kid. The Kid went for his gun and shots rang out. Merle took one between the eyes, and the Kid looked down surprised, feeling the hot burn of a gut wound.

"No, no ,no ,no...!" he yelled in frustration. The young gunslinger fell to the ground in pain, knowing that he was going to die. As he lid on the road, gasping for his last breath, he looked towards one of the loot sacks. The bills that had spilled out onto the ground weren't green, but black and white. As one blew by, he snatched it out of the air and squinted at the black print. Even with his limited education, the Philadelphia Kid mumbled the words he saw.

"The... A... summp... ten... ga... zette. Those damned sons a bitches." With that, the Philadelphia Kid fell back, took his last breath, and brought about the end of the bloodiest chapter in Assumption history."

* * * * *
Tom Gunne sat on the steps his office talking with Sam Blake, while Lou sat nearby, his arm in a sling. They had just come from the funeral of Bill Chafe and Jeb Hunter. The men were silent, sitting together, but each alone with his thoughts. Finally, Sam turned towards Tom and spoke.

"Tom, when did ya get the idear of puttin' the real money in the JP's root cellar. How did ya know them boys would be comin' after it."

The Sheriff puffed on his cigarette as he prepared to answer.

"Well Sam, I didn't rightly know that they knew, if ya foller me. But Assumption has grown. Word gets around now, ya know. Only a year ago I knew every face and everyone's business in this town, but now we're growin', and I reckon that's a good thing. But I guess we hafta be more careful these days, no matta what we're doin'."

As the two men spoke, Old Gabe and Doug Chafe, Bill's oldest, drove a wagon down main street and stopped in front of the sheriff. The wagon's load was covered in a tarp, but the stink gave it away.

Tom thought for a moment, and then answered.

"We'll bury 'em out in the graveyard."

The gathered men looked shocked, and Bill's boy seemed about to protest, but the Sheriff continued,

"Them boys went against the law. They killed men, defiled women, and committed many crimes. But in the end, they all got what they deserved. We'll put 'em in the holy ground, and in the end, the good Lord can sort out what he's doin' with 'em. For that matter, whatever the hell he's gonna do with all of us when the day comes."


So, is this really the final chapter?

Believe it or not, as I routinely track my blog traffic, I've noticed that the ongoing story of Assumption, Oklahoma has become one of the most popular reads here at Geektactica. However, all good things must come to an end eventually, and the Assumption story is no different.

To be fair to players and readers alike, I think it would be more accurate to think of this post as the final chapter of THIS installment of the Assumption story. Sometime in the future, it's likely that we'll be starting a new Old West campaign with some new players. I envision a game that takes place in Assumption a couple of years after the events above have transpired. Whichever way it unfolds, one thing is for sure. Although the Assumption story is shelved for the present, there is a dog-eared page, and beyond, there are many blank pages waiting to be filled.

Thanks for reading Our story,
JET
Posted by JET (aka Jason) at 9:30 PM

So, how are you tracking blog traffic?

Phew - a busy day for the undertaker! I'm exhausted just reading it :)

Did you actually play this scenario, or did you let rip with your creative juices and do a bit of storytelling to wrap things up so you could move onto Carpathia?

We had reached a point where we knew we needed a few months break from Legends of the Old West, as you say, because of other projects. We decided to wrap up this leg of the story with a three way game (which works rather well in LOTOW, btw)

The epilogue was purely post-game fiction, but everything else was more or less how it went down during the game.

Nicely wrapped up. A fitting end to a great sequence of games. Really enjoyed it, and if the Gothic Horror game even half-way lives up to it, you'll have another hit on your hands!

I've really enjoyed these games, but your Gothic Horror is going to be cool too. Gaming is gaming... :)

and there's the money line. :)