Stu's wife gave him a 15mm painted Arab army for Xmas this year. The units were assembled as a Sultanate of Rum army as found in Extra Impetus #2. Eager to see if they could fight as well as they dressed, I brought along my Free Company army and challenged Stu to a 400-point game. The main command was made up of medium and light cavalry, all bow-armed. 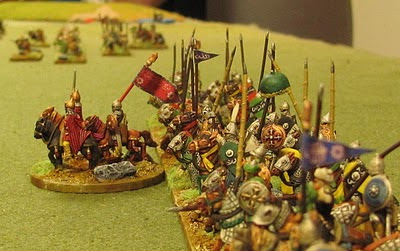 Stu began a harassment run with his light cavalry. My skirmishers and longbowmen started going to work immediately. 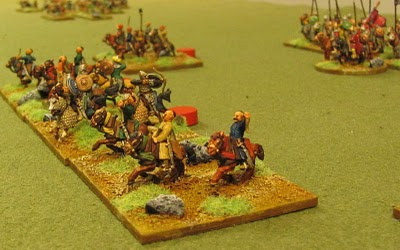 Here's the battle early on. His mob of infantry (top right) made a slow advance towards my line allowing my army to concentrate primarily on his main (i.e. cavalry) command. 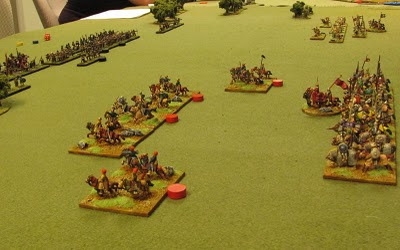 Before long my knights started clashing with his CL and CM units. Charges into the CL's flanks made it impossible for them to evade and left them trapped in melee combat, precisely where they are most vulnerable. 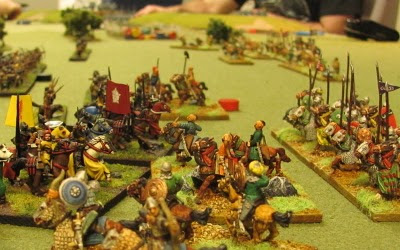 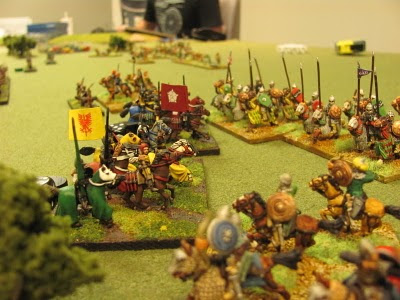 Although I was clearly going to lose my cavalry command, I was doing lots of permanent damage to Stu's force. Furthermore, as my secondary command, my cavalry arm could be lost without endangering my army as a whole. The low discipline of Stu's infantry made it easy to keep them at bay. Once disordered they are difficult to re-order. 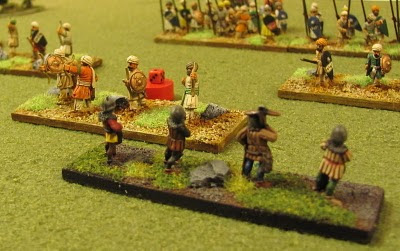 By the time Stu sent my cavalry packing his own cavalry command was wounded and disordered. My archers wheeled to face them and a couple of well-placed volleys took out half of his cavalry command's VD, which in turn, sent his entire army routing off the table. 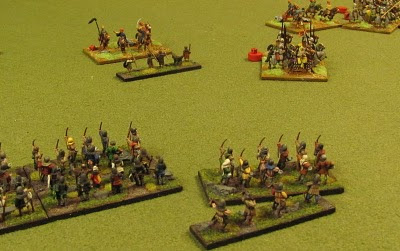 Sorry for the brief report but, let's be honest, the main reason for the post was to show off photos of Stu's new army. It's a great-looking collection and, more importantly, it's a fun army to play against. I'm sure there'll be more games in the future.

Very, very pretty. On the battlefield the basing style really gives a sense of action and even chaos. It looks far more natural than if the models were lined up in neat and tidy ranks.

Thanks for a very nice AAR !

Stu are a lucky man that gets lovely painted minis from he´s wife:)

Thats two very nice looking armies you and your mates got there.

Thanks for posting.
Jason

Lovely stuff there. What company sculpted the figs for Stu's army?

FMB, Stu's models are mainly from Legio Heroica, one of my top three 15mm manufacturers (next to Corvus Belli and Khurasan)