Marc is so close to finishing his 400-point Impetus army now that it's quite maddening. This weekend past we played a 360-point game and it was another nail-biter. Here we see my main infantry line facing Marc's significantly smaller flank. 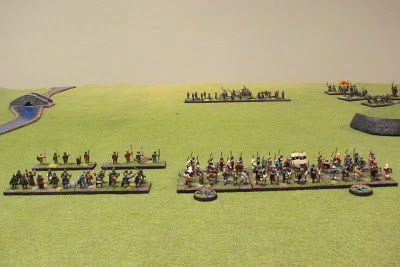 As it turns out, the most dramatic action of the game took place on my right flank, where Rodger of Lynn (yellow banner) led the mercenary cavalry into a line of enemy archers and horsemen. 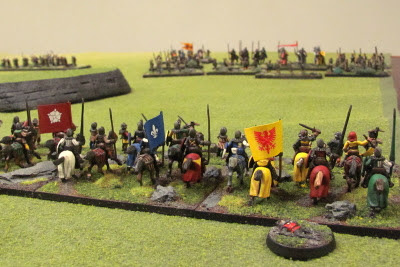 Disorder caused my main line to break apart as I advanced the troops forward. I was hoping to occupy Marc's small infantry line with enough left over to put pressure on his main force who were deployed on the other side of that hill. (i.e. the line that my cavalry was facing) 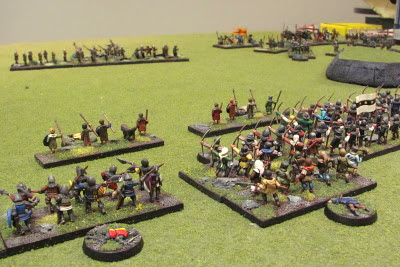 Marc's javelinmen rushed out from the cavalry and destroyed my two units of skirmishing crossbows while my cavalry seemed incapable of rallying and moving forward. I really predicted that my entire right flank would fold up under mass longbow fire. 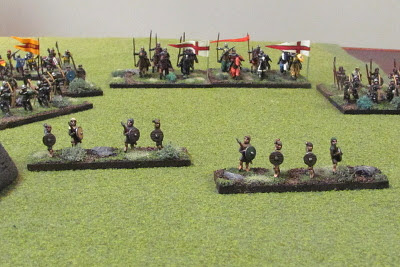 And then the miracle came. Beauregard LeFleur (red banner) managed to rally his men (Discipline C, meaning he rolled a 5), and to make two moves without disorder, and then a third move, extended by a charge roll, right into Marc's infantry. By the time it was all said and done, LeFleur and his knights had taken out a couple of units of Marc's infantry and his Hobilars. 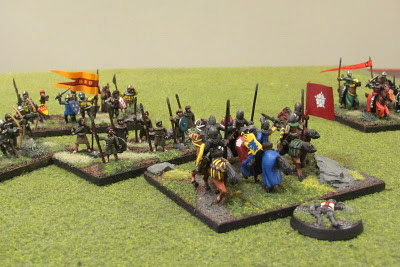 With the strong cavalry threat removed, the mercenary knights moved into the broken English line and began punishing Marc's infantry most savagely. 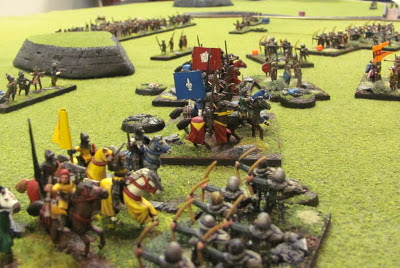 Meanwhile, back on the "main" battlefield, my heavy infantry reached Marc's line and a bitter clash ensued. Marc's forces were fighting back hard now but, with so many of his units defeated, he was hovering dangerously close to his break point. 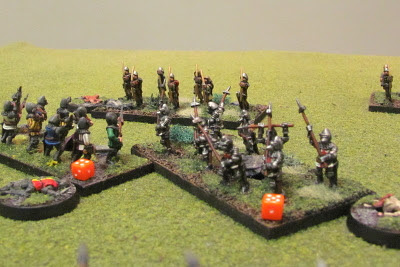 In the end it was one of my units of Breton javelinmen that won me the game. They moved in on a unit of Welsh spearmen and drove them from the table. It turned out the be the key unit that dropped Marc's force just below his breakpoint. 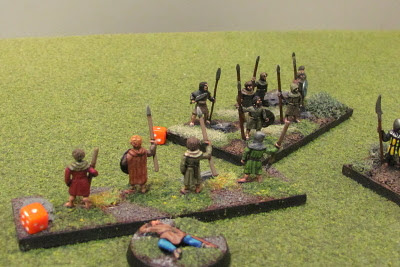 A most excellent game on both sides of the table. I really love the way in which one unexpected (not to mention unlikely) event can happen out of nowhere and set off a chain reaction in Impetus. As far as I can remember, this was probably the best my cavalry arm has ever performed. I learned that losing their impetus bonuses isn't necessarily the end of the world. Just getting them into an infantry line is sometimes all the disruption that is needed.

Anyway, last night Marc and I conducted a little trade - more heavy infantry for him and more cavalry for me. I now have just enough cavalry models to put together two more units. This will allow me to field a more cavalry heavy force with longbows fulfilling a less central role.

Great report, loved the photos too. Thanks.