We've decided that it's time to play some Legends of the Old West again. During our last bout of gaming, different players were joining the campaign at different points, generally depending on when models were getting finished. Such a difference in each posse's ability level had developed that the games were getting a little one-sided.

We are going to play some games this weekend with new posses selected from the main rulebook. Some of the names and character references may be carried over from the first campaign, but the important thing is that we'll all be starting on the same footing.

Sheriff John Henry Mast has been called away to Dartmouth, Nova Scotia on pressing family business and will be gone for some time. With Mast leaving, the town's protection was passed to his younger cousin Tom Gunne from Wichita. Tom brought his associate Sam Blake with him from up north, and deputized local businessman Bill Chafe. 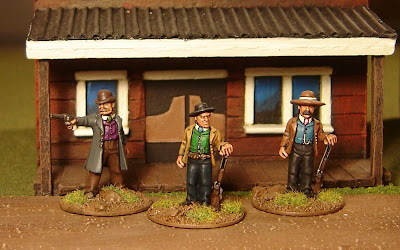 John Mast encouraged Assumption's concerned citizens to continue their fight against villainy under the capable leadership of Tom Gunne. Some of the original Assumption Vigilence Committee have stayed on - Old Gabe, Ep, and Jake Hackett. Gus Carver, the local undertaker, as well as local barman and entrepreneur John Duffy have also joined the cause. 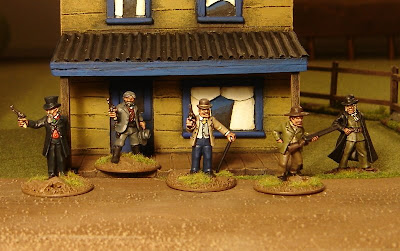 For those who play Legends of the Old West, here's how I spent my $200.00 to enlist the posse:

Ever since John Mast ran the Bullrun gang out of town, there has been little cause for concern in Assumption. The town now has a strong reputation for dealing swift justice to outlaws and thieves. Although there have been sightings of the Virginia boys to the north, Mast feels that the town is well-protected, and that there should be no cause for worry during his absence. Time will tell.

"Hey Cole! I jus' heard, dat durn'd Sherif Mast dun skee-dadled on out from Assumpt'n. I'm figurin' we can get in thar for a bit o' funnin' before we head on down to Texas!"

--James Whyte 'The Philadelphia Kid' to 'Black' Cole Elgin, 1891 before one of the bloodiest periods in Assumption history.

The stranger slowed his wagon in front of the Assumption Law Office and eyed the young man leaning against the door smoking.

"Can you d'rect me to the sheriff, young fella," he mumbled.

The carter appraised the young man and shook his head doubtfully. "Word is some rustlers up around Fort Bluff, headed by some feller callin' hisself Black Cole. IF they head south, they'll be down this way in matter of a few days. P'raps ye should send word to the sheriff while you got time."

Tom Gunne smirked as he threw his finished cigarette into the street. He took up the Winchestor rifle leaning against jail, cocked it, and looked down the length of the weapon. He turned back to the carter with just a little menace in his eyes.

"Like I said, old man... the sheriff is here, ready an' waitin. You got some problem with that arrangement? If you wanna come inside and..."

As the old man pushed the oxen forward, Tom Gunn checked his Winchester once more and laid it down. He pulled out another smoke, lit a match, and mumbled to himself, "Let'em come. Let 'em all come."
_____

scene from the steps of the Assumption Law Office 10 days after the departure of John Henry Mast.