Shoot-Out at the Storage Yard

After a few months of relative peace, the Assumption Defenders, under the capable leadership of young Tom Gunne, were assembled once more to deal with encroaching outlaws. Little was known about the band of rustlers sniffing around the county borders, except that they were run by a ruthless desperado known only as Roscoe. 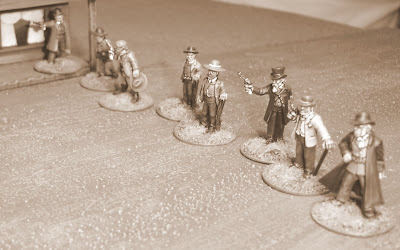 Tom Gunne had recieved word that the bandits were moving his way and had assembled his deputies along with some concerned citizens before their arrival. (see comments from previous post - JET)

The first of the villians snuck-up behind the jail... 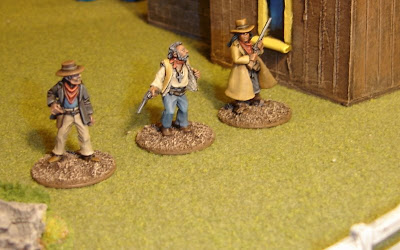 ..and continued their advance behind the JP's house. 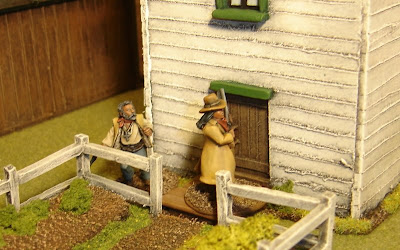 Gunne's group moved up to the Saloon for cover while Ole Gabe moved towards the back of Chafe's store. 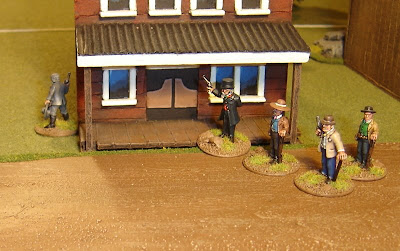 Roscoe and one of the rustlers moved into the storage yard. They had realized that the element of surprise had been lost. 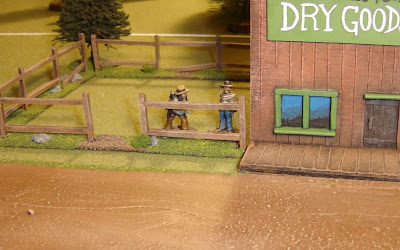 Shots were fired. The bandits on the other side of the street pulled back to reload. 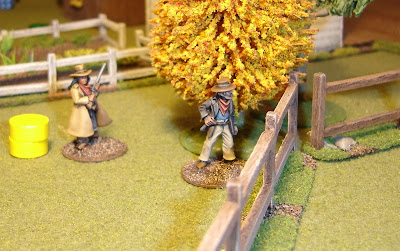 Gus and Gabe got ready to move around the front of the store. Jake readied his shotgun and moved around the back. 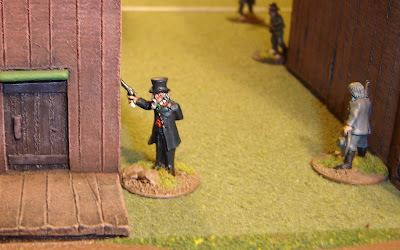 Roscoe and his men held-up in the storage yard. There was much desperate shooting from both sides. For the most part, Bill Chafe's clapboard took the brunt of the damage. 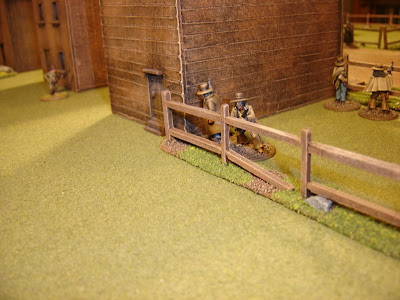 The outlaws refused to give ground. 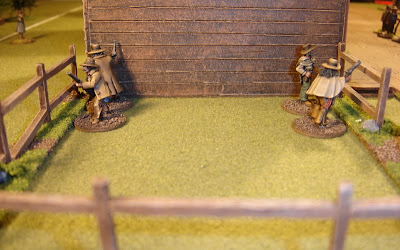 The Defenders prepared to storm the storage yard. A deafening volley erupted from both sides. 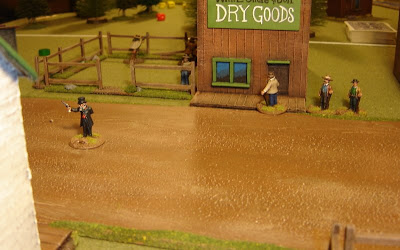 The bandits on the other side of the street moved towards the action. Gunne and his men pulled back to regroup. 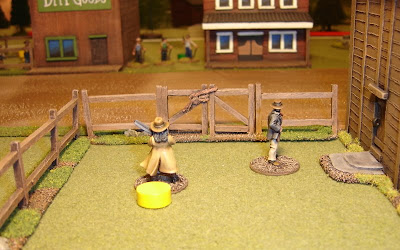 After reloading, Gunne's men stormed from both sides of the Dry Goods Store. 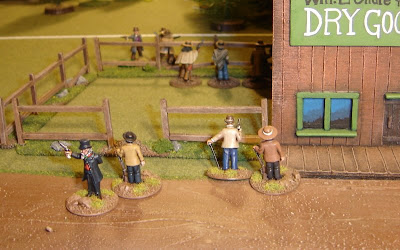 Close-range fire erupted. The fighters closed with knives, saps, and fists being employed to good use. 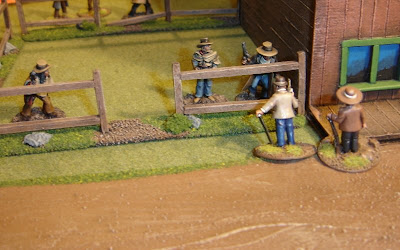 When the dust settled, the bandits fled from the town proper without suffering a single casualty. Although Gunne had driven the bandits away, John Duffy was gunned down in the corral. It was a grim day for the defenders.

The day after the engagement, a travelling preacher by the name of Hezekiah Hargrave rode into town. Tom Gunne approached him. 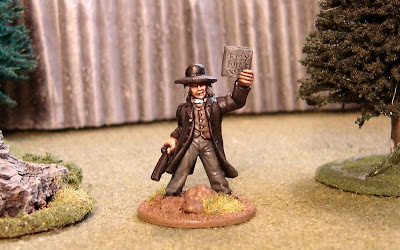 Sam Blake was standing nearby and reported the following conversation:

Tom: "What brings ya down this way, Preacha."

Tom: "Well, if yer able, there's good men here in Assumption, in need of ministerin'. The JP's been doin' funerals and Bill reads from good book Sunday mornin's on the Bank steps. These are God-fearin' folk Preacha. We could ce'tainly use the helpin' hand of a man of God. We could offer room, board, and few dolla's ta help with the Lord's work. What say ya, Preacha?"

Reportedly, the aged churchman looked up and down main street, closed his eyes, and mumbled to himself while holding the leather-bound bible to his chest. When he re-opened his eyes, he held his hand out to Gunne and spoke;

"Well son, saith the disciple, Acts 22:21, 'And he said unto me, Depart: for I will send thee forth far hence unto the Gentiles.' The Lord's sent me to Assumption to minister to these good men. Togetha', we shall do the Lord's work."

The Rest of the Evening:

We had the table split into two halves as there were four of us playing. One side was laid out as Assumption, while the other was set-up as a prospector's hut in the hills outside of town. Although I played against Marc's outlaws and Chris E's Virginia Cavalry, I never got any good shots of mine and Marc's game, and the Chris engagement ended in two or three turns. However, I did take some randow shots through the evening and have posted them below for your entertainment. 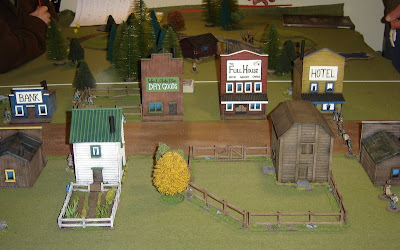 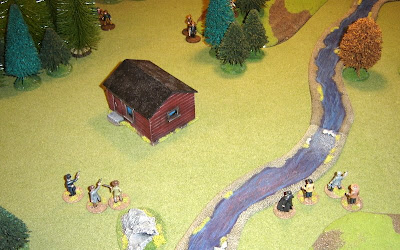 Gus, Sam, and Jake advance in the twilight. 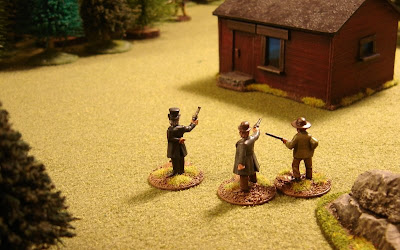 Roscoe and Paco smash it up with the Major. 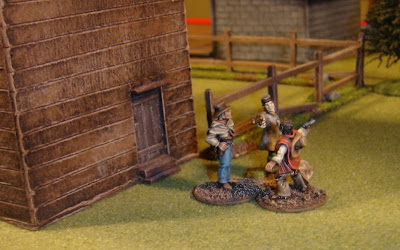 The Major's men plan their assault. 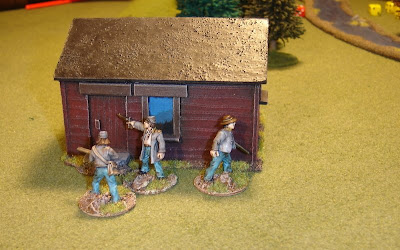 Outlaws fight amongst themselves. 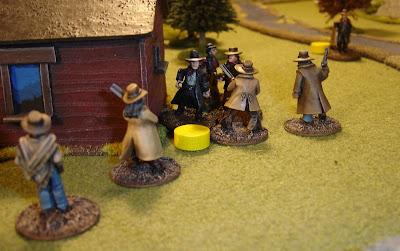 Tom Gunne, Bill Chafe, and Gabe McIntyre hold out at the stream. 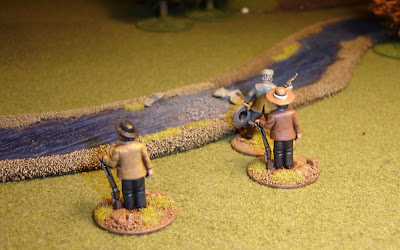 More skylarkin' between Roscoe's men and the Virginia boys. 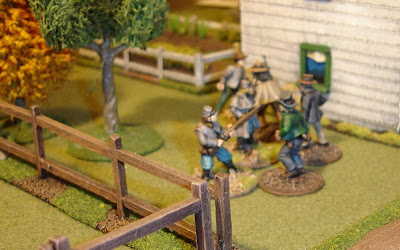 Dandy Dan moves around the back of the cabin, Winchester cocked and ready. 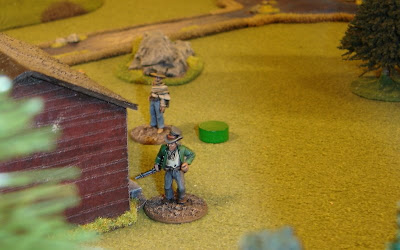 Yours truly, giving Marc a lesson in the fine art of Oklahoma rifle-shootin. 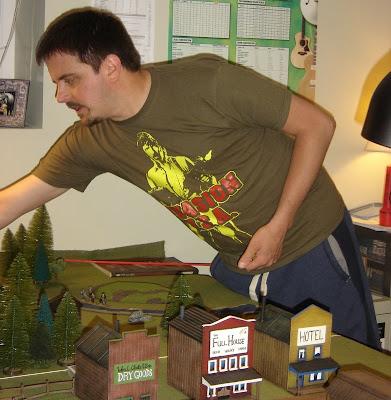 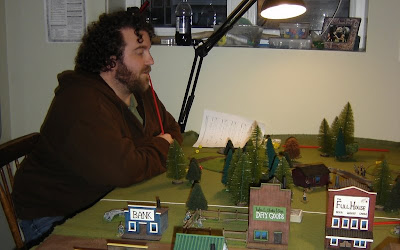 The lovely Angie (Marc's lady, as well as a faithful Geektactica reader) baked cupcakes and sent them along. This is what's referred to as "geeking in style" gentlemen. ("Aw, gawrsh m'aam... I really shouldn't... I don't wanna be touchin yer fancy tablecloth and linens and such with these ole hands... Just lay mine on the back step next to the dog scraps... that'll be fine.. no no... Just pour ma' tea in this ole'bean can... not that fancy china in these clumsy hands... I just couldn't m'aam... beggin yer pardon..." 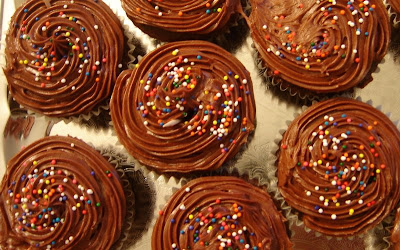 It's great to be back at the Old West gaming again. It's inspired me to paint up some of my Dixon minis, including some cattle. As usual, I'll keep you posted.

Dang. boyh, y'all look like yuer having a bang-up time!