Through gifts and purchases, I've recently acquired some new geek items of interest. I thought some of you might be interested in seeing the new loot. 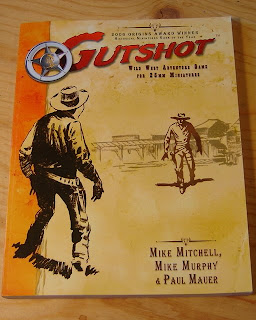 First of all, my wife gave me a copy of the Gutshot Old West rules for my birthday. We love playing Legends of the Old West in my group, but I've been intriqued by Gutshot for some time now.

The game allows players to control just one model each, to select from a number of predetermined character types, and to play specific scenarios. However, the selling point for me was the number of players. The game allows 3 to 8 players facing off against each other at the same time. I've been hunting around for a multiplayer miniature game for some time now. Because we already have old west models and terrain, Gutshot was an easy choice to try out in my group.

I was also surprised at the size of the book. For a $25.00 rulebook produced by a small company, I was expecting 100 pages or so. The Gutshot rulebook is twice that at least, and is printed on good quality paper with lots of attractive B&W artwork throughout. The first game will be posted here (of course!) 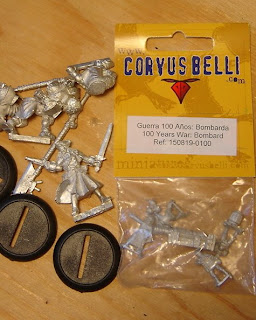 I also received a small package in the mail consisting of items that Keir had ordered on my behalf. For Warmachine, I now have two more Stormguard (enough to take my unit to full strength for Mk II) and a Arcane Gun Mage Officer. The GM Officer is a unit attachment that will make my Gun Mages even more powerful. He also functions as a jack marshall, and gives the jack under his control some awesome shooting abililties.

Finally, bringing it back to the HYW project, Keir also sent in a medieval Bombard he ordered for me a few months ago. The timing is perfect as I've just resurrected the project quite recently. It's just so damn hard to resist those exquisite Corvus Belli 15's.

This weekend I'll be having a belated birthday celebration with the extended family. Word on the street is there'll be a couple of geek gifts there as well.

My Lord - I have so much stuff to build and paint. I shouldn't by anything else until 2010. We'll see.

Those bombards are great - I've just cleaned up two of them (took about five minutes total, they're so well cast) for my Impetus project. Paint may even reach lead soon!

Refresh my memory... you are painting English? or French? or English and French?