When we last looked in on the Assumption Defenders, Sheriff Tom Gunne had just hired a travelling preacher to minister to the needs of the townsfolk. It wasn't long before Hargraves started noticing spiritual matters that needed dealin' with. A posse of Southerners had taken up in the Full House troublin' the locals, drinkin' too much whisky, and generally making asses of themselves. The good reverend swiftly went to the sheriff's office looking to have the heathens driven off.

The majority of the lawmen advanced up the street with Preacher holding the Good Book aloft. 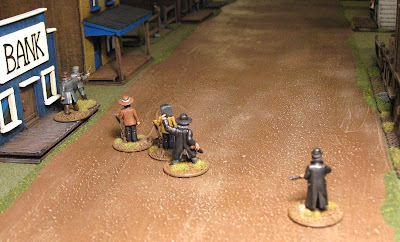 Jake Hackett and Ep snuck through the corral and stumbled upon the leader of the southerners preparing to make a quick escape. Shots were fired, but to no end. 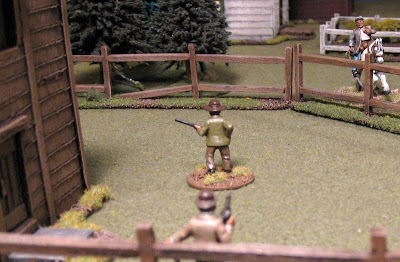 The lawmen and Hargraves came in sight of the southerners. The report of pistols filled the afternoon air. 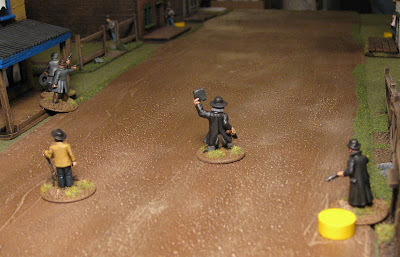 The preacher spotted the captain and quoted the prophet Ezekiel as he approached; "Again, when the wicked man turneth away from his wickedness that he hath committed, and doeth that which is lawful and right, he shall save his soul alive!" 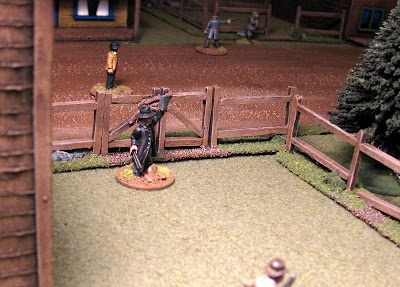 Meanwhile, Sam Blake and Gabe MacIntyre gave their own bible lesson (minus the bible). 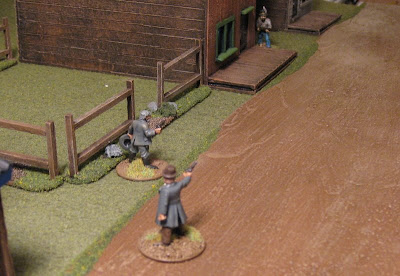 Sam has the skill Trigger-Happy, which means he can shoot out of turn at anyone who charges him. He took one southerner down before the drunken fool reached him. 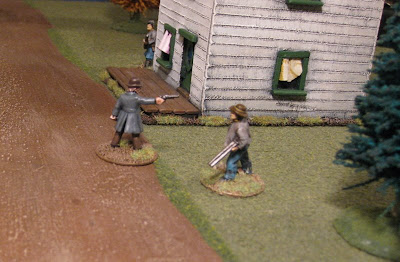 The captain had doubled back, charging into Sam when he saw his man go down. The captain took one of Sam's bullets in the arm for his trouble. 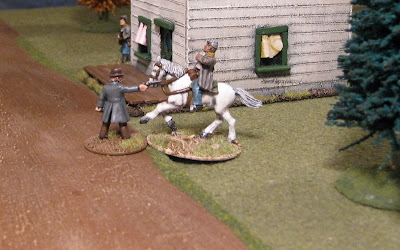 Although beset upon all sides, the captain couldn't resist going after the sheriff. The sheriff and his men tried to surround the captain, but the coward bolted out of town with his surviving men when he realized the fight was lost. 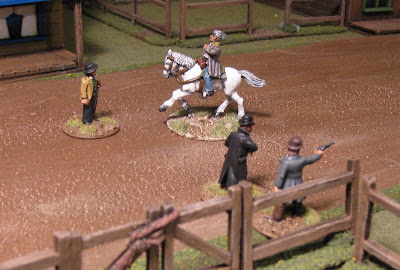 The Assumption Defenders watched the defeated men ride out of town. Gunne muttered to himself, "Ventually, I'll see that southern fool hangin' from the galla's" 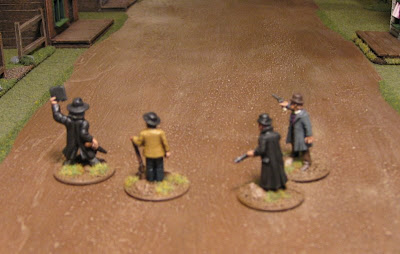 Chris and I had another great game of Legends of the Old West. We both had high numbers of our posse taken out of action during the game, but we were lucky in that none actually died during the post-game sequence.

Marc and I had played a game before this one, but I was on the poorly-lit side of the table and couldn't get any good photos. It's only right that I mention my defeat. Marc's outlaws caused my lawmen to head for the hills and killed one of my upstanding citizens.

Marc also bought along this new token - a miniature cowboy hat. We use it to keep track of who has the Drop during each turn. 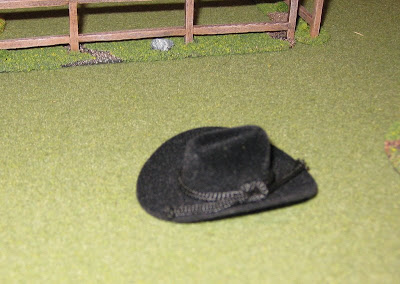 Hopefully we'll have some more old west action in the near future. Chris has committed to painting three more miniatures for his posse. If he follows through, I told him I would play LOTOW again next week. Keep your fingers crossed and send all of your positive painting energy in Chris's direction.

Very nice description of key points in the game.

What a truly outstanding battle report. I see your LOTOW adventures have come to fruition, and look damned fine. I was particularly pleased to note the presence of the fiery preacher, armed with Bible, as well as (presumably) some sort of reliable six-shooter with which to educate the benighted heathens...

Actually Dan, he's toting a sawed-off shotgun. Not a lot of time for aiming when you're engaged in a firey homily.

Thanks for the comments,
JET

Are the buildings "home made"?

The buildings are homemade, and you can read through my tutorial here: http://geektactica.blogspot.com/2008/09/how-to-construct-building-on-budget.html

Unfortunately I have no skill!

Well done on the buildings