The Curse of the Dertflinghans: Chapter Eight 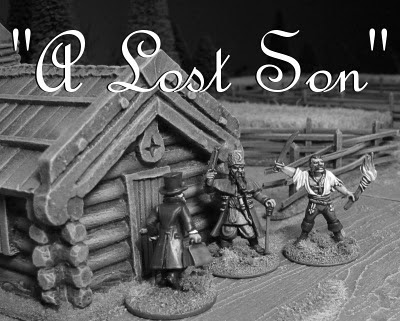 25 April. Hamlet of Keirberg - After a hearty mid-day meal, the Count Von Krumm and I set out from the asylum together with our brave companions in tow. Although he tries admirably to hide his fears behind a stout facade, I can see that my dear friend worries greatly as to the possible misfortunes that may have befallen his missing son. Apparently, the last correspondence received from the young Hector gave his location as the small hamlet of Keirberg, just a half a day's ride south of the asylum. We reached the settlement at dusk and, as all was quiet, Helmut and Bjorn set out in search of the locals and, with any luck, to secure lodgings for the night. 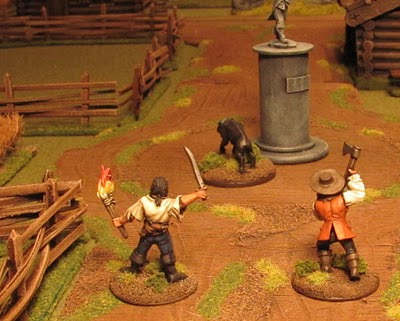 The hounds seemed uneasy so I sent Ernst along with the Count's man Lazlo to scout the perimeter of the buildings. 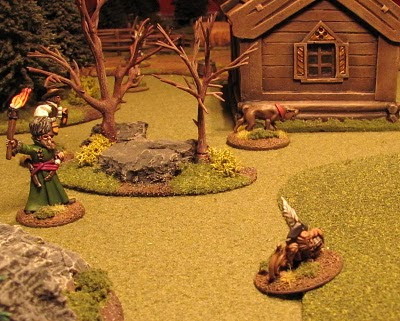 It was then that the hellish call of giant wolves split the night air. These beasts never approach without violent purpose so weapons were drawn. I ran into the nearest dwelling and barred the door behind me. 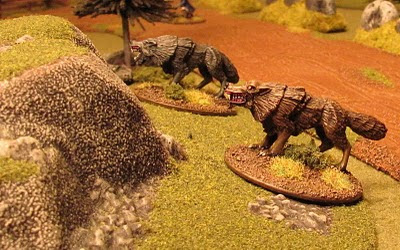 From the window I could see that Ernst's hound became involved in a vicious dogfight with one of the great wolves. The murderous barks and growls of the enraged beasts was most terrifying, and I was quite relieved to have a sturdy wall between me and the night. 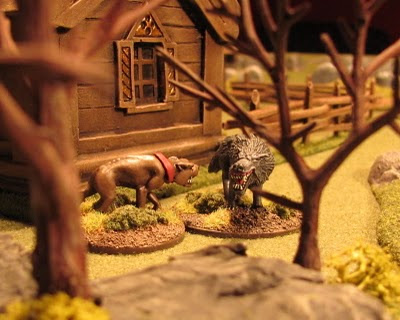 Then my eyes were drawn to torchlight radiating from a rise in the trees beyond the outskirts. From my vantage point I could just make out the vague silhouette of figures clashing in a violent exchange. I was to learn later that the primary combatants were the monster slayer Lazlo and a great vampire. I admit to to being somewhat awestruck by these men who, in spite of their less developed intellects, pit themselves against the night-spawned creatures of the pit. 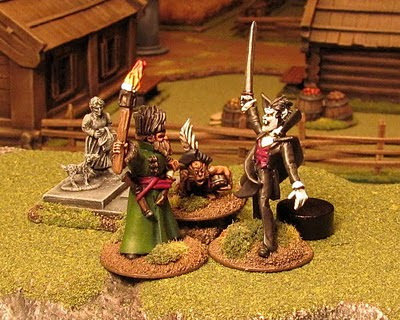 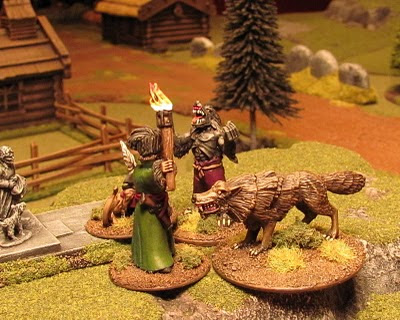 Then I heard a commotion coming from the direction of the neighboring building. I ran to the adjoining wall and peered out the window. In the darkness I saw the axe-wielding Bjorn and the Count's son Helmut doing their best to subdue a vampiric child-like creature who transformed into a hideous beast right in front of our eyes. 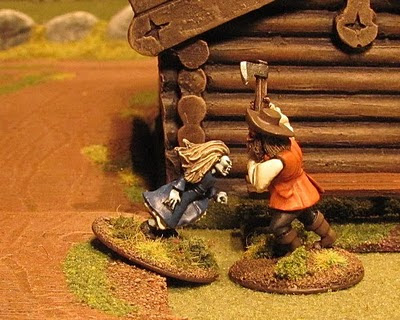 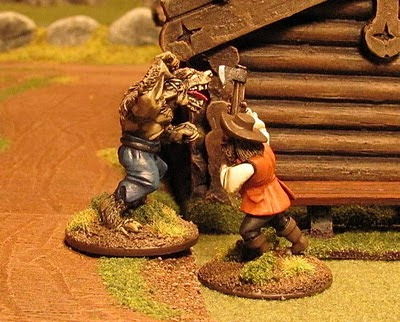 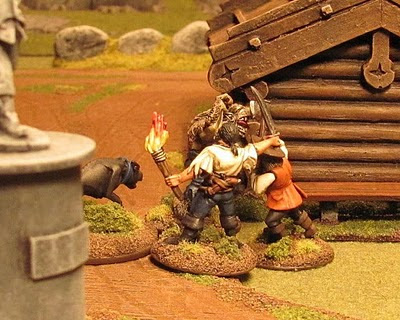 Within minutes, the encounter was over. The vampires had vanished into the night as quickly as they had appeared. Upon closer inspection, we found the villagers' dead bodies in the largest building, hacked and slashed in a most brutal way. To be safe, the Count ordered the bodies decapitated, the hearts removed and burned, and the mouths sprinkled with the heavenly host which he personally produced from a small ivory box.

I now lay in one of the smaller huts where we have made our camp for the night. Although the vampires often hunt near settlements, it is uncharacteristic for them to be so openly aggressive. It seems that they were in the process of searching for something, but what it was, I cannot guess. Presumably, the townsfolk interfered with the creatures' efforts and were dealt with accordingly. 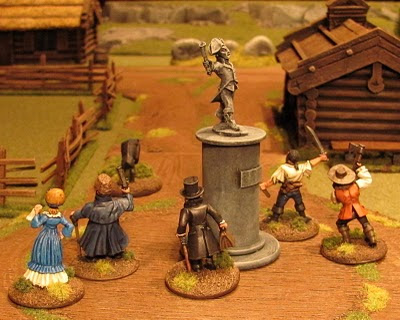 Now that I lay in silence, I can no longer escape from my fears nor hide from my guilt. Konrad is a close friend and I have no wish to mislead nor to withhold information from him. However, my suspicions of his son's fate are based primarily on assumption rather than fact. I can only hope that our further investigations will help to fill the gaps in my data and then, with any luck, I will be in a position to tell my friend the probable yet awful truth - FG.

This was the first battle for my freshly-painted Hungarian Monster Hunters. As it turns out, Keir was in town for the weekend so I decided to run a scenario to introduce him to the Chaos in Carpathia rules. He played the vampires and I played the humans. It was a Seek & Find scenario, which happens to be one of my favourites. It's fun when the academics and specialist characters get to shine alongside the more combat-oriented characters.

This game never counted toward the actual campaign result as both of the warbands were mine. Furthermore, we never got to finish off the scenario because of time constraints. More importantly, however, Keir really enjoyed the game and plans on painting a vampire warband himself in the future. In fact, I believe he already has the models.

Finally, you may be wondering what I thought of the human warband after all of this time playing vampires and werewolves. Well, as I suspected, they are awesome. The monsters have variety in their rosters, but they tend to be more focused on combat, as you would expect. Fielding a human warband, whether monster hunters, Vatican elites, or gypsies, allows one to use some very different and interesting character types. The downside, of course, is that humans can't change into beasts, rip doors off of hinges, or leap onto roofs like the monsters can. I guess the moral of the story is, you can't have your enslaved blood servant and eat it to.

lots of awesome stuff here, keep up the good work!

Can I ask the origin of your wolf models? I'm looking for some good wargs, and they seem a proper scale and aren't hyena-beasts based off a certain movie.....

Thanks for the positive feedback.

Those wolves are from Westwind's Gothic Horror line, and I agree, they are more Warg-ish than GW's silly cat things. If you are an OLD GLORY army member you would get them at 40% off the price listed here: http://www.oldglory25s.com/view_product.php?product=GH%2011

Otherwise, just get them straight from Westwind: http://www.westwindproductions.co.uk/catalog/product_info.php?cPath=2_19&products_id=30