The Day Trouble Came to Town

Last night we finally did it... Marc and I started the ball rolling and played our first couple of Legends of the Old West games. As Marc and I started our geek journey almost 10 years ago playing GW Necromunda, this game really took us back in time. I still haven't finished my buildings & fences, nor have we made a decision on the road issue, but nevertheless, it's my humble pleasure to present... The Day Trouble Came to Town. (brought to you in techni-color) 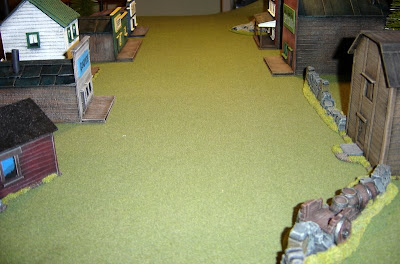 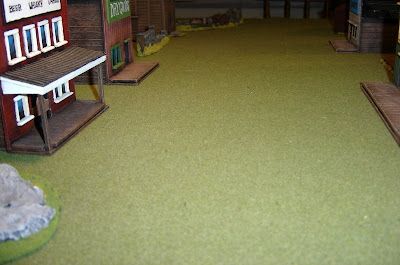 And then they appear, the infamous Sundown Gang, defiling the peaceful streets of Assumption. Pictured below (L to R): The Scranton Boys - William (back) and George (front), Gentleman Earl Pickard - desperado leader of these ragtag wastrels, Jake Goodyard the "Calamity Kid," hailing from New Crossing, down Cheyenne way, and the infamous Jeremiah "Bull" Tucker. 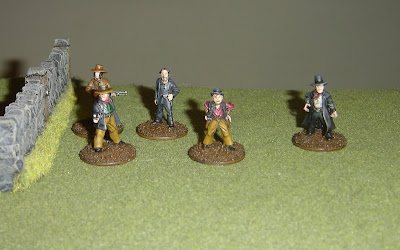 If the Sundown Gang came looking for trouble, they were sure to find it. Assumption was built on the blood and hard work of honest folk. They surely weren't going to lie down and take what was comin like an ill-wed woman.

Second from the left; Sherrif John Henry Mast, and the dashing gentleman in the grey suit, his deputy Old Gabe MacIntyre. The gent in the buckskin jacket is Jebediah Hunter, a trapper and wanderer who thinks of Assumption as his home, even though he has no right lodging in the town proper. The men in black are Billy Jenson's men from out east, hired guns brought in through the earnings of the Assumtion Vigilence Committee. John Mast had heard that the Sundown boys were moving down south and was ready.

The Sherrif and his men move up past the jail... 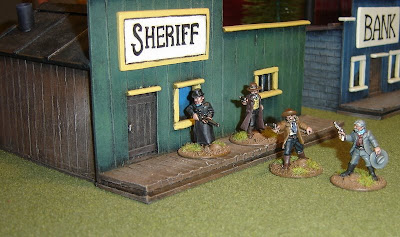 While the rest of the Easterners move up the other side of the street. 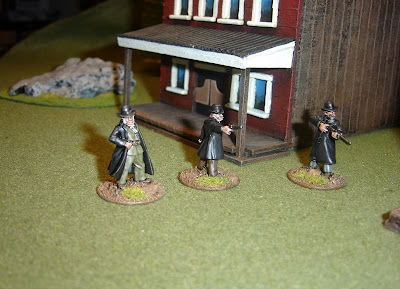 Meanwhile, Earl, the Kid, and Bull Tucker advance toward the Gunsmith's. A cool breeze creaking through the roof tiles is the only sound until the Kid loses the little control he has. Earl tries to hold him back, but the guns start blazing, and then all hell breaks loose. 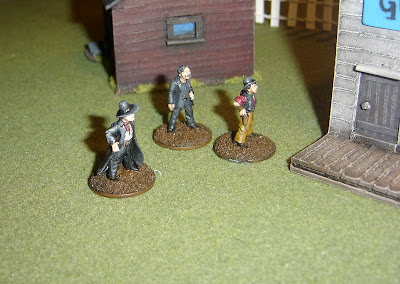 Now that the action had started, the Scranton boys move up and pull out the shootin' irons. 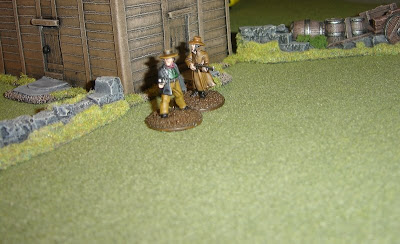 Jeb pulls back by the JP's house for cover as the outlaws lace the alleyway with lead. 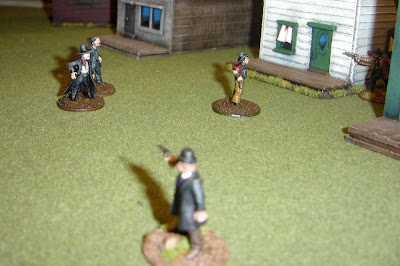 The front of the Dry Goods Store streams with lead while the shopkeep holds up in the storage attic. 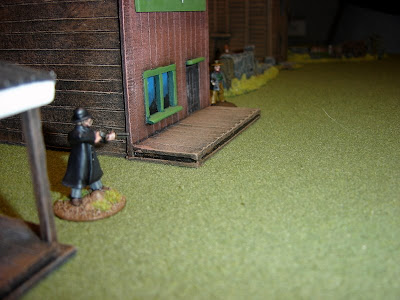 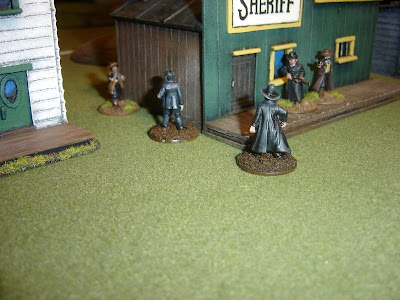 George Scranton runs headlong into Jimmy Rourke. Fisticuffs ensue. A few short minutes later, the scoundrels are driven out of town and the lawmen regroup. 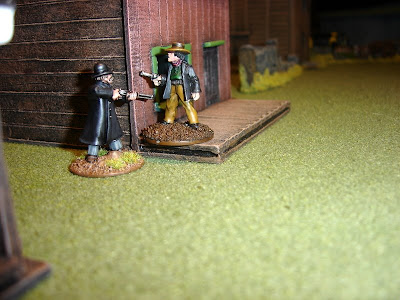 In typical brash outlaw style, the Sundown gang returns at sundown no less, and stirs up more trouble. 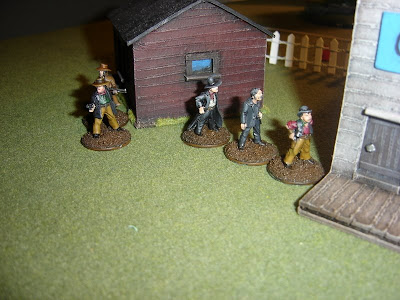 The lawmen, beaten and battered, advance to deal with matters. Such is the fate of those who serve the law. 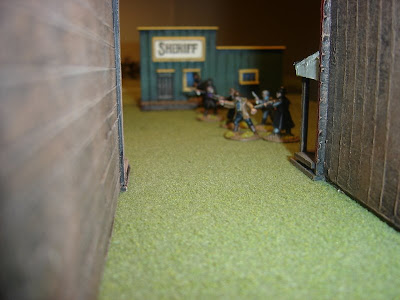 Gunfire erupts and lawmen start hitting the dirt. Old Gabe and Billy Jensen are taken down by outlaw gunfire. 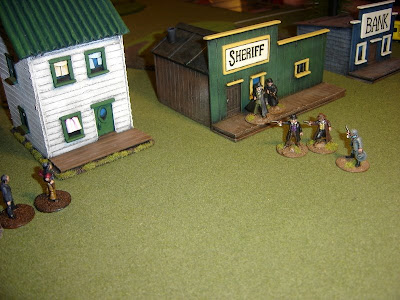 Pistol whippin is the order of the day. Even Big Jim can't stand up to being ganged up on by cowardly outlaws. 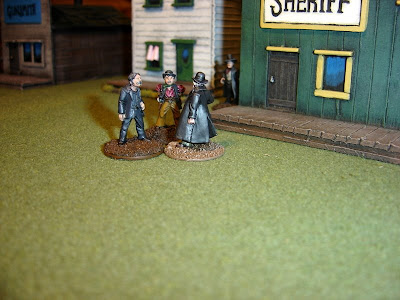 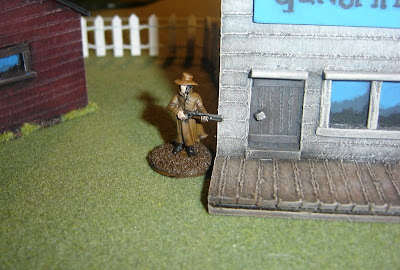 One of the Rourke boys gets taken down by George Scranton. He dies instantly from a stab wound. Now, George Scranton is a murderer as well as a cattle thief. 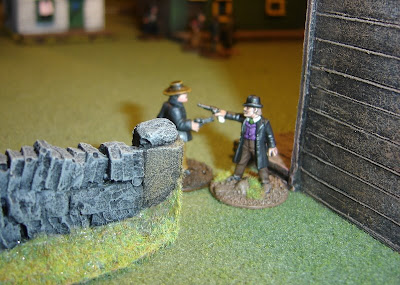 Things are turning desperate. The other Rourke brother, unaware of his brothers grisly death, makes a last stand on the saloon porch with the Sherrif. "Should be make a run for the outsheds Sherrif?" The sherrif reloaded and replied unwaveringly, "Not on my watch Rourke. Not on my watch. Now gun'em down!" 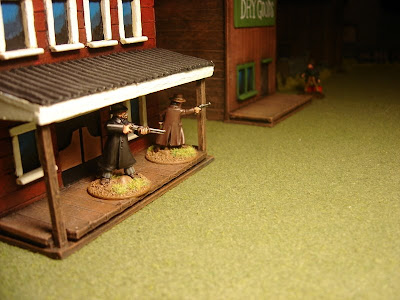 Earl and the Kid, not satisfied with killing a few good honest men, continue up the street, bloodlust keeping them in the fight. 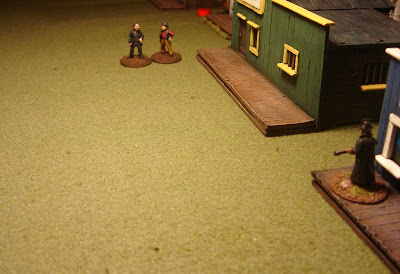 Bull Tucker takes down one of the easterners. Things are looking desperate for our heroes. 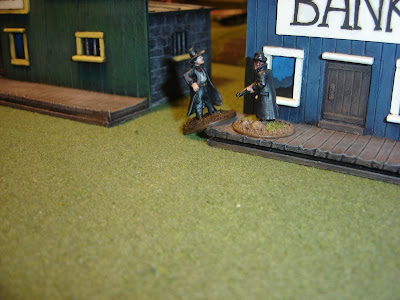 A final dramatic brawl takes place outside the saloon. Blows are traded and shots are fired. 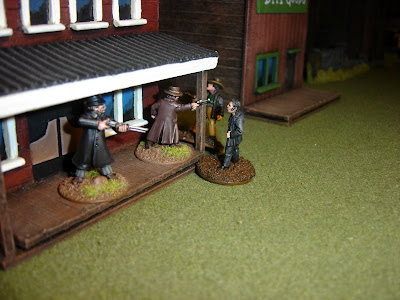 And like every Western tale worth telling, it comes down to two men... one a lawman, one an outlaw, but in the end, just men. Whose to say that one mightn't have worn the other's shoes if circumstances were different, but such judgements aren't for me to make. All I know is what witnesses who remained hidden that day told me.

Apparantly, the two men stared at each other, each hating the other, and respecting him at the same time. They exchanged no words, but stared around the street, taking in the dead and wounded. Mast holstered his gun, knowing that he had lost many men, and Pickard, knowing that he had been victorious in one sense, realized that his gang had been greatly limbed and walked out of town, kicking his wounded men to their feet as he left.

As Mast leaned over to help Eli to his feet, he reportedly muttered one statement under his breath; "Next time, Assumption will defend Assumption..." And that was that as they say. The game is great, and both Marc and I had a wonderful time. I'm going to finish up my terrain and some more models, because let's face it - we'll be playing a lot more of this game in the future.

just checking to see if my comments are working or not. There have been a couple of comments to the contrary.

Cool! I am a deputy!