Geek Day Diary Entry #5: "Death in the Streets of Assumption"

We had decided as a group to take a Geek Day break in August. The summers are short here in Newfoundland, and it can be quite a shame to waste one of our rare, hot Saturdays stuck inside a building. Needless to say, by the time today rolled around, we were all chomping at the bit and ready to get down to some serious geeking.

We set up the room with three main play areas. Tables were set-up to play Impetus, Legends of the Old West, and Warmachine. Ken also brought along his newly-acquired copy of Space Hulk. As there were six of us present, we assumed that such a variety would keep everyone playing something they enjoyed for the day. 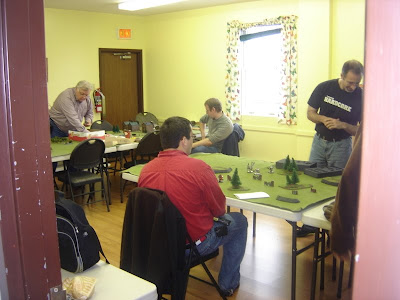 As it turns out, I found myself playing on the Legends of the Old West table for the entire day, and that's what I've chosen to focus on primarily. It gave me the opportunity to take the Assumption Defenders out against the Black Cole Elgin Gang, as well as the 17th Virginia Cavalry.

Even though the photos didn't turn out the greatest, here are the posses as they were brought to the table this morning. 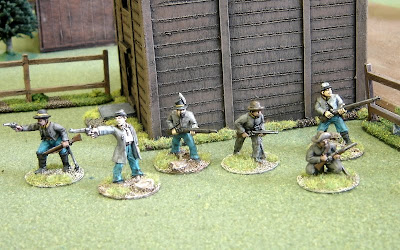 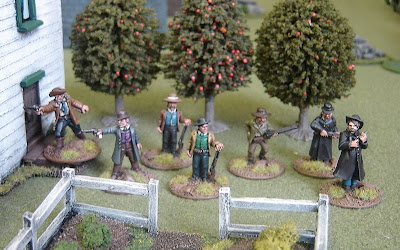 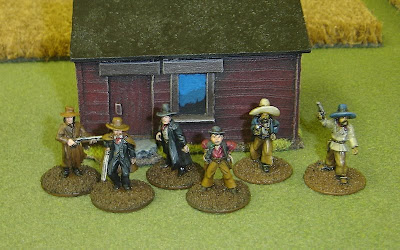 I played four games in all; three against Chris (the Virginia boys) and one against Marc's outlaws. I had two wins and two losses, and luckily, my gang suffered no serious losses or wounds (or at least none that the Doc couldn't fix). Here are some action shots in no particular order. 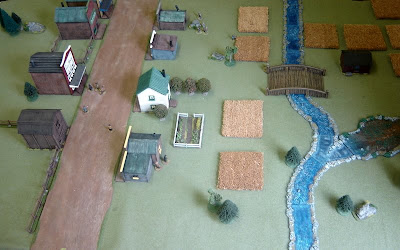 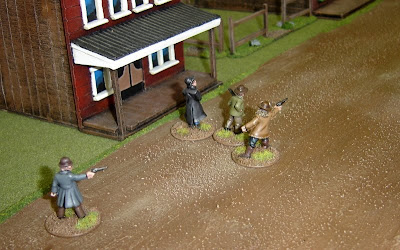 Brave citizens advanced under the leadership of Deputy Blake. 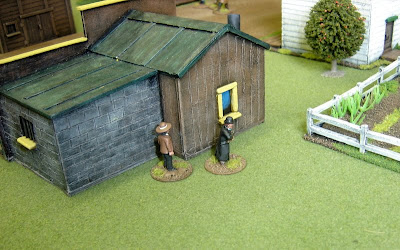 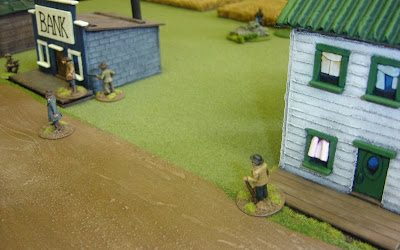 The Assumption Defenders closed with the 17th Cavalry. 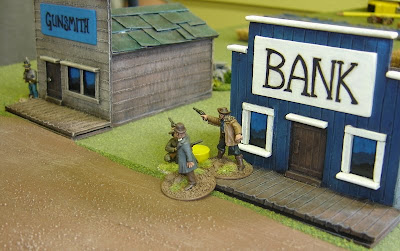 Before long, it came to blows and the Virginia boys were driven off. 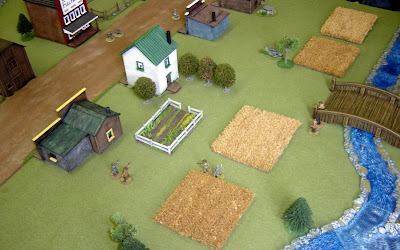 Mjr. Pileforth and his men were out for blood (after the recent hanging of
Moses Peachtree) and returned in attacking force almost immediately. 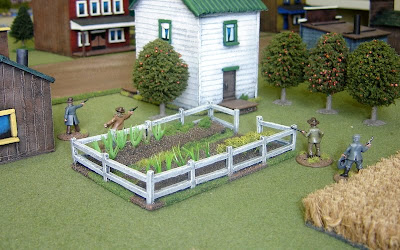 Although battle-weary, the Assumption boys refused to give ground. 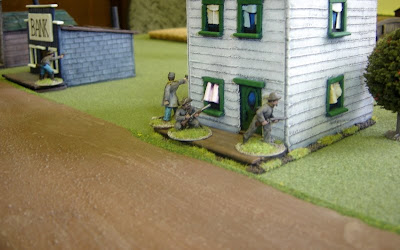 This time the southerners advanced more carefully, using the JP's house for cover. 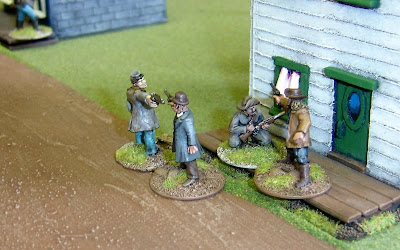 Sam Blake found himself in band-to-hand combat with the Major. 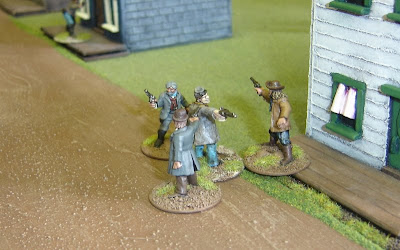 Pileforth is no dunce with a knife, and luckily for the boys, Chris's posse
headed for the hills before the Major had the chance to gut the works of them. 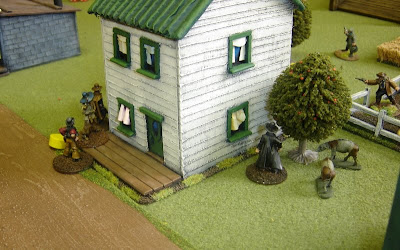 My game against the Black Cole Elgin Gang was fast and furious; so much so
that I never had the chance to take many photos. Both posses were damaged,
but I voluntarily headed for the hills. Better to live and fight another day! 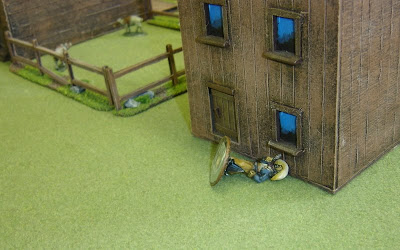 Funny story: Sheriff Gunne caused a leg wound on Julio Swarez. When
Marc "visited the Doc," he rolled a 1. This led to yet another roll on the
serious injury table, and the unfortunate Mexican died. Outlaws just
don't have the best medical insurance plans I guess. ;)

The Rest of the Day:

I had hoped to play a game of Impetus against Stu at some point during the day, or perhaps to try a game of Space Hulk (which I've never played before), but it wasn't to be. In the end I had fun, so it didn't really matter. Even though I was engrossed in my own games, I did take a few shots around the room throughout the day. 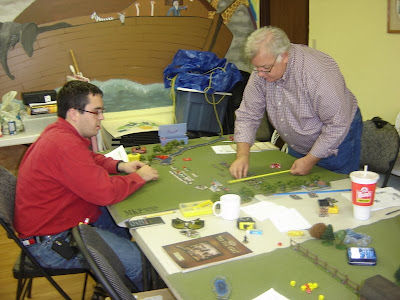 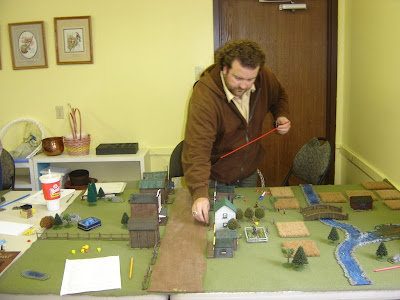 The evil, moustache-twisting brains behind the Black Cole Elgin Gang up to no good. 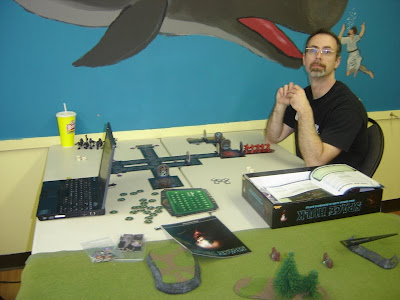 A passing whale nibbles on Ken's head as he patiently waits for a human opponent. 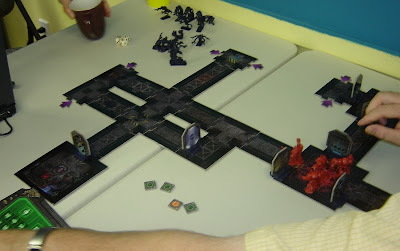 Ken and Marc duke it out in Space Hulk. 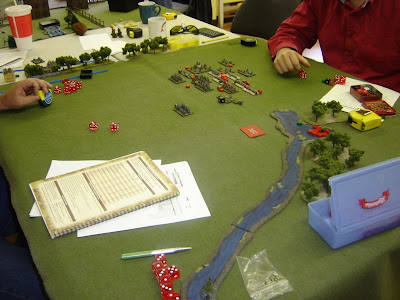 The Parthians and the Palmyrans engaged.

So there it is. Another successful Geek Day. All in all, I think everyone had a good time. Notably, Chris E. finally got his posse membership up to seven strong, a feat he's been trying to accomplish for six months. Also, Stu finally attended his first Geek Day and had two games of his beloved Impetus. At the very least, I think the day may have inspired all of us to shake off our summer laziness and get back into our productive painting grooves.

Thanks for reading,
JET
Posted by JET (aka Jason) at 7:40 PM

Still don't understand how it all works, but at least I can follow the plot lines! :) Amazed by the amount of detail you put into your buildings (seriously...curtains?!). Glad these days are working out for you guys.