It was midday and many of the townsfolk were out working the fields or conducting business outside of town. The Assumption Vigilence Committee had become very confident in their ability to protect the town and its citizens from outlaws and criminals. Perhaps that was why their guard was down that day. 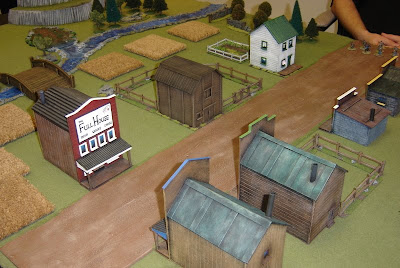 Whatever the reason, Mjr. Pileforth and his men moved stealthily into position on main street before most of the remaining tradesmen knew what was happening. The boys had torches ready. Moses Peachtree died by the noose and it was time for revenge. Assumption would burn! 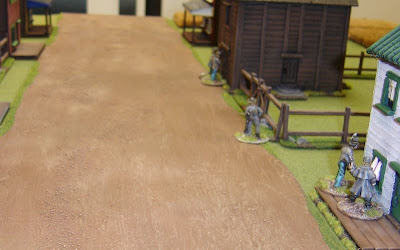 Jeb and Gabe were just getting back from Marketrock when they sensed things weren't right. "Hold on here Gabe," said the trapper quietly. "I'll run back and tell Gunne and the rest to catch up!" 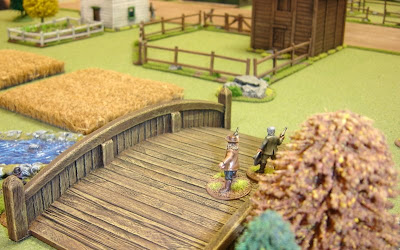 Bill Chafe was just about ready to settle down to a little fishing when he heard shots fired. There was trouble in town, and he was too far out to get there in time. 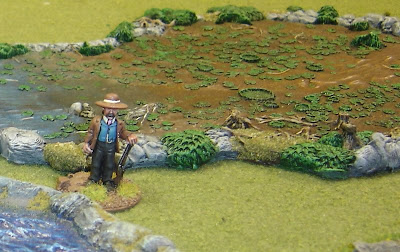 Zeb and the major were about to take some of the townsmen at gunpoint and set fire to the hayloft when a stranger appeared noiselessly from behind the livery stable.

"Whatev'ah he is," responded the major, "he will ce'tainly find himself greatly inconvenienced on account of his lackin' a firearm." 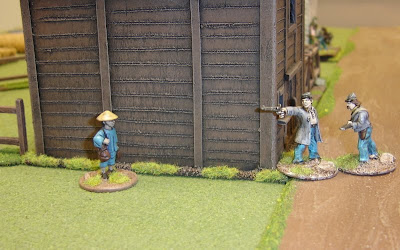 With a seemless motion, the stranger pulled a small blade from a hidden fold and threw it accurately at the major's pistol-hand. Pileforth's hand jerked up as he yelped in pain and the pistol went off harmlessly into the sky above. Before a second had passed, another small blade flew straight towards Zeb and embedded deep within his leg.

As the major and his men pulled back, Tom Gunne and his men ran across the bridge towards the scene of the fight. The Assumption men spewed lead down the street in unison.

"Fall back," the major cried and with that , the southern boys tore down the road and out of town. 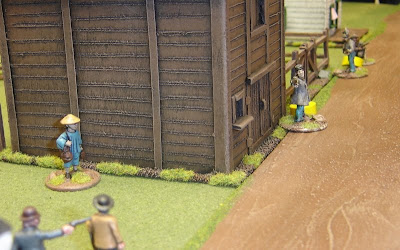 Before Tom or Sam had time to address the foreigner, shots rang out from near the river. The lawmen ran for the bridge. As they were about to cross, Tom slowed down and came to a stop.

"Hold up boys," he said. "There ain't no townfolk left out in the fields, so who's shootin' at what? There's some skullduggery in this. Back to the town... now!"

Sure enough, the shots were fired by one of the southern boys as decoy to get Gunne and his men out of town. The major and his men had already skulked back into town ready to make a second attempt at arson. 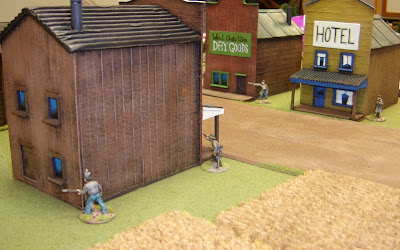 This time, the element of surprise was lost. The Assumption boys moved up through the corral and got the drop on the Major and his men. 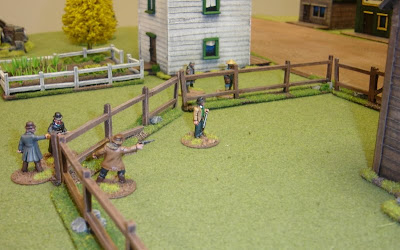 The southerners realized that the advantage was lost. However, the major was hell-bent on makin' amends. He shouted with authority, "Swarm'em men. Use cover. Lay down a volley." 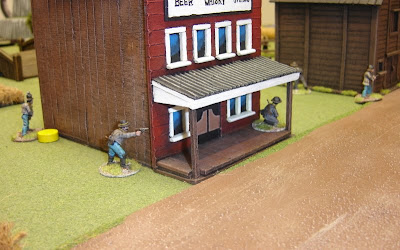 However, the past year of dealing with rustlers and outlaws had made the Sheriff and his men hardened fighters. They kept their cool and moved straight into the firelane. Each man found his mark and the southern boys started going down like flies. 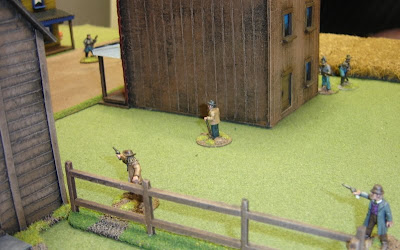 The major, despite his rage, realized that the day was lost and initiated a full retreat. The remnants of the 17th Virginia Cavalry headed for the hills and Assumption was saved from destruction.

Tom, Sam and Jeb turned towards the foreigner and approached. The sheriff held out his hand and addressed him.

"Well sir," he said, "It seems we're in yer debt. Your bravery saved the town from a burnin. What's yer name? Where ya from?"

"Well, if it's all the same to you, we'll just call ya Lou." Tom replied with a chuckle. "I don't know what drove ye from yer home, but I can tell yer a brave and honest man, and yer certainly welcome here in our town."

The stranger bowed and walked back towards the hotel. Sam Blake said to no one in particular,

"Well, he might be a brave feller, but he sure's a strange one."

During the fighting in the town and the fields, five men stayed still and silent in the woods across the river watching. When the action was over, one made a imitation bird call and the motley group disappeared into the forest. (Stu has started painting his mountain men-JET) 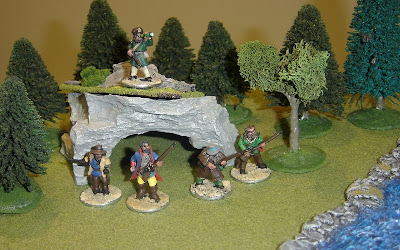 When Stu finishes his posse, we'll likely restart the campaign so that we're all on an even footing. However, we'll use the same names and attempt to keep the story moving as seemlessly as possible.