Although I've displayed each individual unit of my Free Company army as part of my Hundred Years War (Impetus) thread, I wanted to formally finish-off the project by showing some photos of the entire 400-point force arrayed as an actual army on the field. First the photos - then all of the boring commentary. 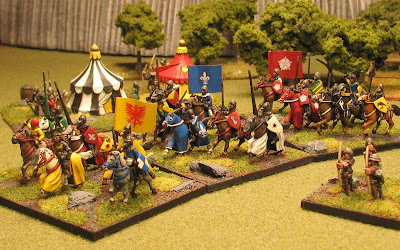 Mercenary men-at-arms gallop into position before battle. The three units are led by (L to R) the impetuous Rodger of Lynn, the battle-hardened Etienne de Garde, and Beauregard LeFleur, a great French tactician, as well as something of a charmer with the ladies. 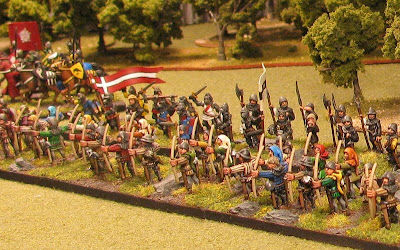 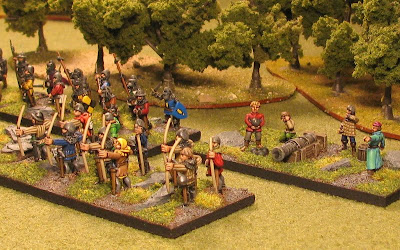 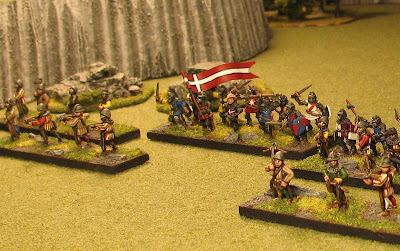 Mercenary crossbowmen fan out ahead of dismounted men-at-arms in an attempt to soften up the enemy. 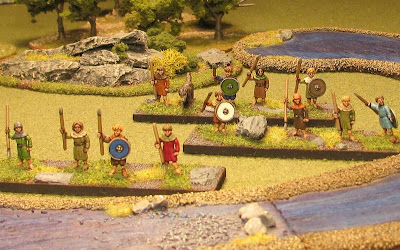 Terrain that would be impassable to many is easily traversed by the skilled Breton javelinmen. The combination of their fleet-footedness and fieldcraft makes for highly mobile and effective skirmishers.

The rest of the posts in this thread display each unit individually and form the "living" gallery that I used to track my progress. Now that I've completed Impetus armies in 6mm, 10mm, and 15mm, I can say with assurance that 15mm is my favourite scale, both as a painter and a gamer. I find that this scale allows me to approach each figure as an individual, but the smaller size (relative to 25/28mm) allows me to paint at a speed that gets results in a reasonable timeframe. That isn't to say that I'm done with 6mm or 10mm - far from it. However, for the forseeable short term I will be sticking with 15mm projects.

If I may presume to advise, I would strongly recommend the unit-by-unit approach when painting an Impetus army at this scale. I found that concentrating on selecting, cleaning, painting, and basing one unit at a time helped me to stay focused and kept the oppressive "Will I every finish this project?" feeling at bay. A medieval army provides the perfect project for those who get bored easily and who don't want to get caught in painting the same colour scheme over and over and over again.

Thanks to all who followed me on this project. The enquires, comments, and compliments were very motivational and I hope you'll all be sticking around to watch the next army grow.

Thanks for reading,
JET
Posted by JET (aka Jason) at 9:32 PM

Nice job! We've been doing Impetus Lord of the RIngs armies in 1/72 but I've come to quite like 15mm.

I love your work, and agree with your advice. Impetus works well to a unit by unit approach.

Sir, I salute you. Very impressive work regarding painting, basing, scenery building and, not the least, presentation. Got me inspired to finally take up the thread and build an army for Impetus myself.

Best wishes for your Free Company (may it never disappoint you) and any forthcoming project!

I've seen your 20mm LOTR armies Bob, and I wish there were some more close-ups on your site. You might be interested in the newly-released free Impetus Fantasy supplement. There's a link on the Impetus forum under the BIF section.

Thank you Konstantine. I assume by your comment that you are in the midst of painting an Impetus army, or perhaps have numerous ones already.

SG, which army are you painting?

Actually I opted for an army of the Holy Roman Empire (c. 1400), but since there's no specific list for them, I'll give the HYW French a go. With a lot of crossbows, the casual peasant levies/urban militias and a good choice of knights they make for a good stand-in as well. Miniatures will be drawn mainly from Perry (simply the best on the market) with some other ranges thrown in.

By now I'm still preparing the 'base ground', i.e. acquiring bases and miniatures. Progress will be documented on my blog.