Tonight Marc and his lady accompanied Allison and I to the Hong Kong restaurant for some decent Chinese food. After stuffing ourselves silly, Marc and I thought that a couple of games of Warmachine would make for a fine dessert, so it was off to my trusty geek-room. Ken gave Marc a very finely painted Epic Deneghra for Xmas (more on that at the end-JET), so Marc brought her to the table for a 35-point smash-up against Haley.

Early on in the first game, Marc moved the bulk of his force up behind the stone walls (pre-painted resin scenery from Marc for Xmas - JET) while I spread the Cygnar force out, ready to shoot down whatever I could. 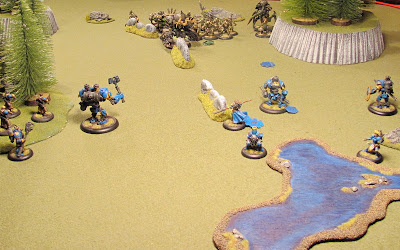 Haley kept Temporal Barrier going for the entire game. The impeded movement combined with the lowered DEF is particularly crippling to most Cryx forces. 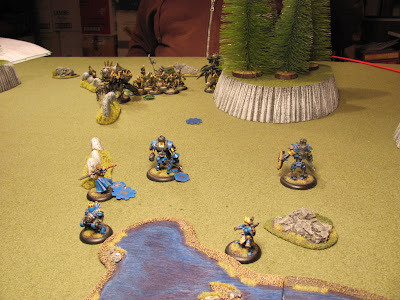 Notice the placement of the bloat thrall? The next turn, he was even closer to the Necrosurgeon and Deneghra. A well-placed shot from the Defender caused the bloat thrall to explode, taking a number of mechanithralls and Gorman with it. The POW 14 blast caused seven points of damage on Dennie as well. 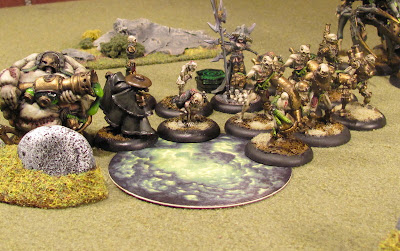 I had planned on casting Temporal Barrier again and picking off another couple of models. However, since Deneghra was almost at half DMG, I moved Haley up, feated and took a couple of hand cannon shots, and then, using the arc node from the Lancer (top left), cast Arcane Bolt at the Cryxian caster and finished her off. 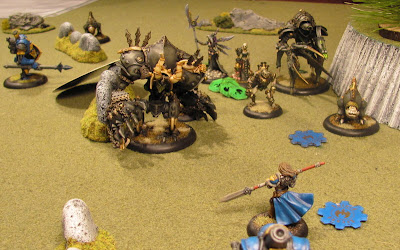 The first game went relatively quickly, so we decided to throw down again. I advanced with a pair of Lancers, ready to cast Scramble or Chain Lightning at the first opportunity. 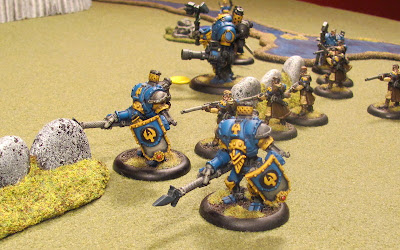 This time, however, Marc kept the majority of his force to my extreme right and marched his infantry through the canyon. 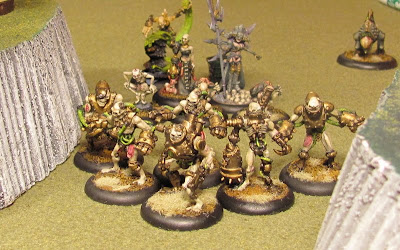 Haley prepared her shooting line. The idea here was to take down the entire unit of mechanithralls so that they Necrosurgeon couldn't revive any of them. 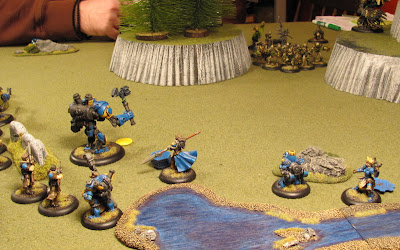 Haley feated. The Long Gunners moved up and annihilated the thrall unit. Haley kept Temporal Barrier going, and more importantly, camped a couple of FOC so that she could use her Vortex Spear to negate enemy spells. After nullifying spells cast by Deathjack and the Skarlock, Deneghra moved up onto the nearby hill and tried to spell Haley with very little effect. 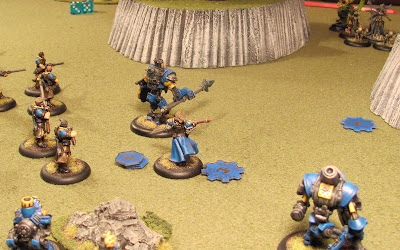 Even though Marc had made Dennie ethereal, Haley's spear is a magical weapon, so she charged in and with eight focus (thanks to the Squire), she finished off Deneghra again. 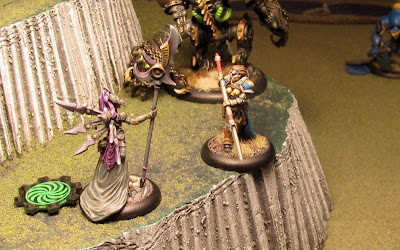 We managed to play two great games, but I suffer no inflated ego. Marc was clumsily using a new caster while I was using an old stand-by. Still, we all had fun - even Ken who sat in the bleachers nodding off throughout the action.

And speaking of Ken, he and I played a game of Hordes last night at Marc's house. It was a Troll vs. Skorne smashathon, and what a lot of smashing there was! We each annihilated the other's force, and although I never took many clear photos, here's a shot of an epic melee between the Dire Troll Mauler and the Titan Gladiator. The Titan took the Dire Troll down to one damage point, and the next turn, the Troll killed the Titan. I almost felt bad (almost). 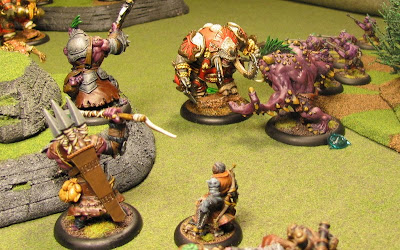 Anyway, after a lot of smashing, I had almost taken out Morghoul. On Ken's last turn, he had one long shot (literally) to take out Hoarluk. The Titan Cannoneer shot, missed, but still hit Hoarluk with the scatter.  Furthermore, although Hoarluk had three fury, the Impaler was the only surviving beast and was already at its maximum fury allowance of three, so damage transference was not an option.  However, Ken would have to roll a 17 or an 18 on three dice to win. Sadly, the photo tells the story. 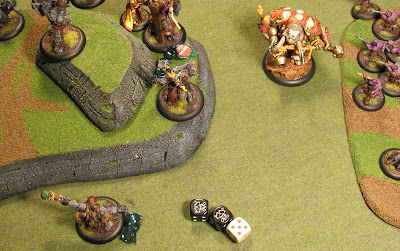 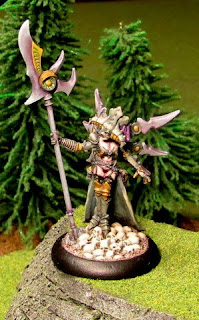 Finally, Ken gave Marc and I very thoughtful and individualized gifts for Xmas this year. He purchased, and more impressively, painted each of us a model for our armies, in our colour schemes. For Marc, he painted the Epic Deneghra model featured in the battles just covered. For me, he painted Viktor Pendrake, which was very cool, since I can field him in both my Cygnar and Trollblood armies. 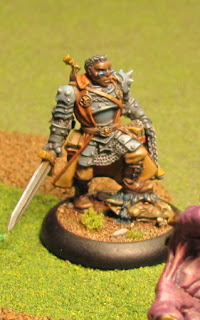 For those of you who have seen photos of Ken's Menoth and Orboros forces throughout my previous battle reports, you'll have noticed that he's no slouch with a paintbrush, and the value of these gifts (and I feel comfortable speaking for Marc here) cannot be measured monetarily.