Impetus Battle Report - The Flight of the Free Company

Chris had recently finished painting his first 300 points of Milanese, so in spite of the many chores leading up to Xmas, we had to find time to throw down earlier this week. The native Milanese general Francesco Prosciutto surveyed the battlefield before the engagement, determined to send the mercenary forces of John Stockwood fleeing from the field. 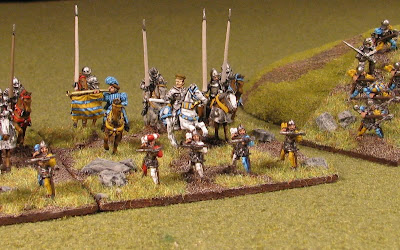 The terrain was rather typical. We casually laid out some hills, a forest, and a couple of fields, with the center of the battlefield left more or less open. The top of the photo shows Chris's main line (CPx4 screened by Sx4) with infantry to his left, ready to defend the hill. 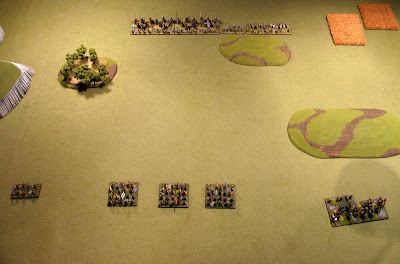 Etienne De Garde (fair general) led the mercenary right-flank. Stockwood had coincidentally sent his nephew Rodger of Lynn on a minor diplomatic errand to the south of France just a day before the battle. 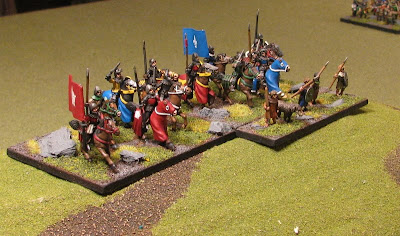 Across the field, the Milanese city militia were ordered to march to the hill and to entrench themselves as speedily as possible. 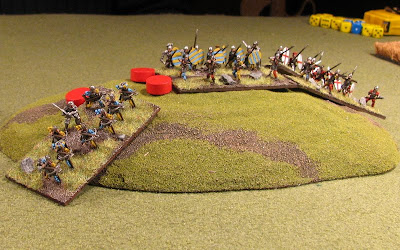 De Garde urged the knights towards the Italian line, convinced that the crushing speed of the warhorses would ride down the enemy. 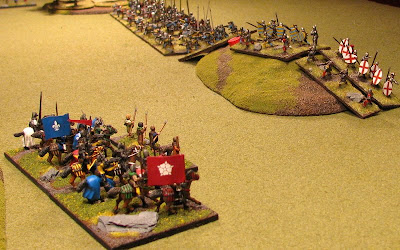 Unfortunately, just as the mercenary knights began to crest the hill, the evening sun shone blindingly in their faces. The ensuing confusion caused the cavalry line to break formation, and the necessary force was lost. The Italian militia, holding the high ground with spears set to take the charge, drove the mercenaries back down the hill. 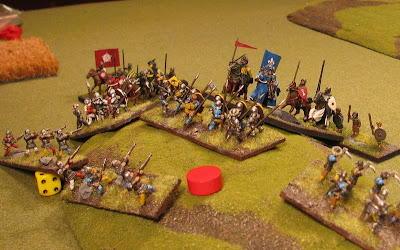 Before the battle had ended, De Garde's command was routed and fled the field. 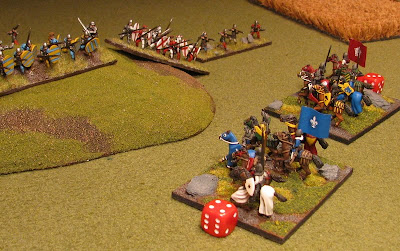 While Etienne and his men were bringing shame to the De Garde name, Stockwood advanced the main line cautiously and began raining arrows down on the approaching Italians. 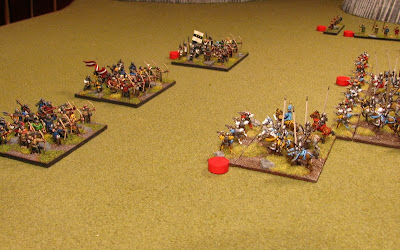 The Milanese cavalry advanced steadily despite the long-range missile threat. 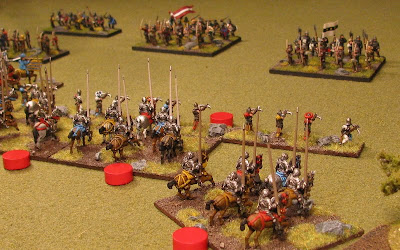 In a shocking display of zealous chivalry, Francesco Prosciutto and his personal guard charged forward towards the mercenary infantry. Before making contact, some Italian knights were injured or killed by well-aimed arrows. 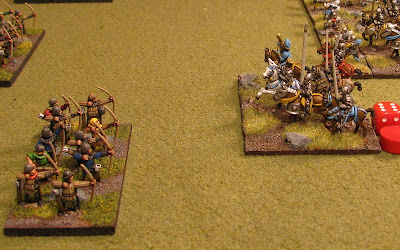 The longbowmen fled through the men-at-arms to their rear, and before long, a desperate melee had broken out. Stockwood was sure that the Italian general would be captured or perhaps even killed. 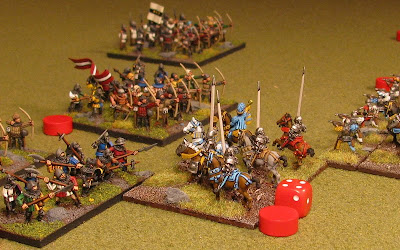 Just as the center unit of mercenary men-at-arms was re-deploying to come join in the melee, the Italian knight Giovanni the Black led a ferocious charge against them. (I took a photo of the dice roll to accurately capture said ferocity - JET) 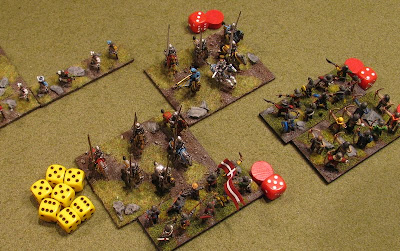 Needless to say, Giovanni and his men were the decisive victors of the engagement. 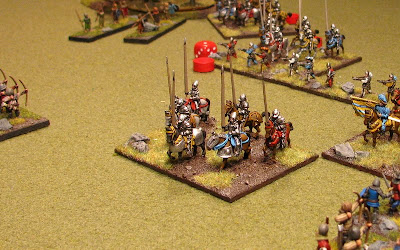 Stockwood and his veterans found themselves in melee as well. Unfortunately however, the battle had already been decided, so Stockwood had to give the order to fall back. Another victory for the Italians. 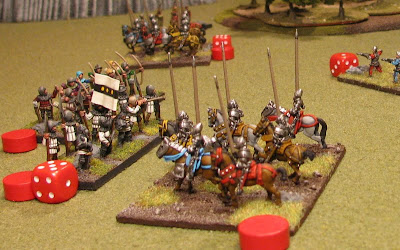 How I love this game! Impetus is one of those rare games (much like Legends of the Old West for me) where I don't care whether I win or lose - I always have fun. I think my line was spread too thin, and I was too aggressive with my right flank. With my core of archers and footmen, I should be holding my heavy cavalry back in support of the infantry line. At least that's what I'm telling myself.

Chris is painting his elite Familia Ducale and his artillery unit, which will take him to the 400-point goal for this project. I expect that one of our next battle reports will be a a 400-point engagement. In the meantime, it's midnight on Christmas day, my wife and son are long asleep, and I think it's time that I followed their example.

Thanks for reading (and Happy Holidays),
JET
Posted by JET (aka Jason) at 11:19 PM

Great battle report, your Impetus posts have prompted me to download BI and I'm thinking of getting the full set.