The Curse of the Dertflinghans: Chapter Three 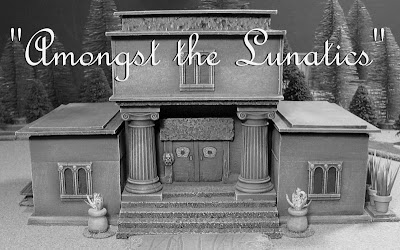 19 April. Grunberg's Lunatic Asylum - During the past number of years, I have followed Mannleigh into many far-flung and exotic places; the Peruvian Jungle, Antarctica's Mt. Takahe, and even the interior of the Dark Continent itself.  It is with the greatest conviction that I pen my next statement - In all of our previous destinations and encounters, there has never yet been the equal of this place in both horror and danger. Never.  But I shan't waste paper describing events which have already been recorded in earlier entries.  Instead, I shall focus on recalling the most recent events of our journey, that is to say, everything that has transpired since the party arrived last night at Dr. Franz Grunberg's lunatic asylum.

After our run-in with the bestial wolf-men three nights previous, we made our way along the Old West Road until we came to the foreboding structure of the asylum.  As we walked across the main grounds I couldn't help but be struck by the vast weight of the place.  Although the structure originally served as a hunting lodge for Dertflinghan's elite, it couldn't have more adequately served its current purpose.  It was as if the architect had a premonition as to the future use of his mighty edifice. 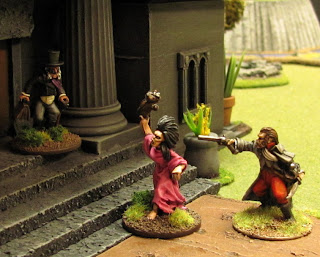 As we approached the main entrance, an elderly gentlemen displaying an air of courteous authority  came forth to greet us.  It was apparent that he recognized the troubled lunatic who was in our custody.

"Why my Dear Nell," he ejaculated in a surprised tone. "You have found your way back to us.  What thanks can I offer you fine gentlemen for returning her safely?"

After formal introductions were exchanged, Nell was led away by a lovely young lady (who I later learned was the good doctor's stepdaughter, Ms Emmalina Grunberg), while Mannleigh, Ms. Poundwood and myself were brought into a most comfortable drawing room on the asylum's top floor.  After brandy, port, and cigars were distributed, we all made ourselves comfortable while we explained to the doctor the circumstances which had led us to his doorstep. Dr. Grunberg also explained the nature of his institution, and although we were both medical men, I found him somewhat close on the subject of his treatments and practices.  In any event, we enjoyed a much needed evening of relaxation, the highlight of which was Ms. Poundwood's capitol rendition of Verdi's La Forza Del Destino on Dr. Grunberg's refurbished Stodart piano. 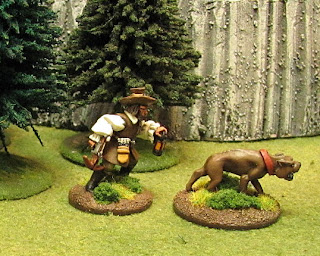 We were all offered very comfortable accommodations for the evening, and I found the doctor and his lovely stepdaughter to be most auspicious hosts.   As I lay in a state of complete tranquility on my feather mattress, I was startled by a low growling outside my window.  As I peered out into the darkness I saw the doctor`s groundskeeper Ernst Holdt trudging into the forest with his great dog.  I found it odd that a man would wander so freely in this country after nightfall, but gave it no more thought and quickly fell into a restful sleep.

It was about 2:00 in the morning when my companions and I awoke to a horrendous cacophony of howling and growling.  As I peered out of my ground floor window I was filled with terror.  The Great Wolf and a veritable army of his ilk were advancing towards the asylum.  I dressed most hastily, gathered my arms, and ran through the halls towards the main entrance. 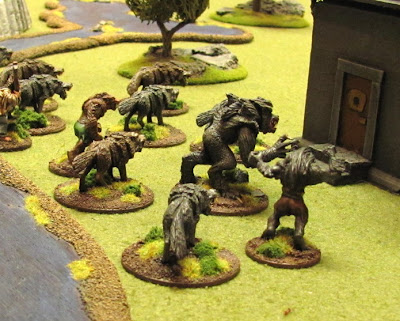 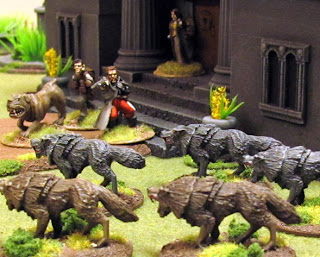 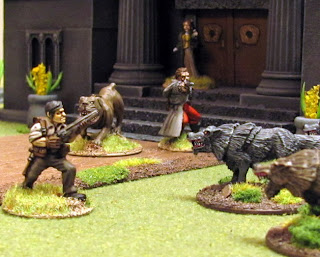 Mannleigh and I almost collided in the foyer. We burst through the front door, he with Flasher drawn, and I with my trusty carbine at the ready.  The air suddenly filled with the crack of gunfire, and we realized that our Austrian allies (who had been camped out on the grounds) were already felling wolves with practiced skill. However, they were not felling enough for my liking.

From around the back of the building a great pack of wolves was pouring towards us.  I fired off a cracking shot with the blunderbuss that killed at least three of the beasts (thank the Lord I split my time between the library and the firing range) while Mannleigh put two down with his pistol.  Even with this impressive display of ballistics, close quarter fighting was inevitable.  The night was a torrent of growling, snapping and clawing.  At some point during the confusion, I was aware of the Great Wolf and his companions leaping down from the top of the asylum with supernatural agility and power.   It was quite difficult to determine how the situation would play out.  The darkness was blinding and a few minutes into the melee, one of the mighty beasts pummeled me with great force and I lost consciousness. It wasn`t until I regained my wits the following morning that Dr. Grunberg explained how the battle had concluded. Apparently, Mannleigh fought on until he too was incapacitated.  Ms. Poundwood, finally overrun by the brutes, had no choice but to retreat into the asylum and barricaded herself in the drawing room.  Around the same time, Johann and the wolf hunters, exhausted of ammunition, had retreated into a potting shed to defend themselves.  Shortly after, as quickly as the attack had begun, the Great Wolf and his companions disappeared into the night with the lunatic Nell in tow. 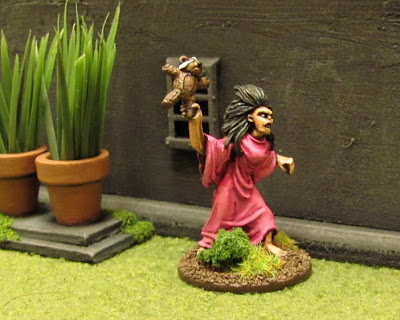 Up to this point, I haven`t had the luxury to embark upon scholarly deduction, but now that I sit in this beautiful garden, mind and body enveloped in the security of daylight, I began to ponder.  I shall list my musings in no particular order and leave them neglected until I obtain further evidence or greater enlightenment.

How is it that Mannleigh and I live?  The beasts could have easily devoured us, but after we were downed, they left us in peace?  If they have no lethal intent, why do they attack us?  Have we incited them in some way?

The inmates of this place are treated in the underbelly of the building.  As a medical man, why has the doctor not invited me in particular to observe his work?  Is there something sinister at work, or does this chain of thought point to personal paranoia on my part?

There has yet been no sign of the old Dertflinghan man whose correspondence led us to this cursed place.  Have we crossed paths and bypassed him or has he met with some pernicious end?

As I alluded to previously, the holding area of the asylum is underground and well-fortified.  The great iron door that blocks the stairway to the cellars is most formidable. Although they might possess the supernatural strength necessary to shatter the door, I noticed that the door was in a state of perfect maintenance this morning? How then did these creatures free Nell? I questioned Dr. Grunberg on this point, but he was amicably evasive.

This last point I hesitate to write, for it seems to solidify the sense of loathing and suspicion that has coloured my outlook since we have come to this dark corner of the world. As I took my coffee and pastry in the reading room this morning, I noticed papers on the writing desk.  My attention was drawn to them, for written in a bold hand, I saw the same runic characters that Ms. Poundwood and I found on the sarcophagus some days ago!  I shall keep this knowledge to myself for the present.  I think it is the wisest course - RA.

We actually played the Rescue scenario from the original scenario list in the main rulebook.  It turns our that Nell rolled a "Captured" result on the post-battle table after the last game, and this seemed like the most natural way to proceed.  The game itself was a bloodbath, and the majority of the warbands were KO'd or coup d'graced at the end of the scenario.  It was terrific fun, but...

We played this as our second game on Saturday night, and it was getting late by the time we started.  With the night wearing on, we were forced to rush a little, and I found that the game suffered because of it.  Like most adventure games, Chaos in Carpathia is like a fine wine or an expensive cigar.  It must be carefully considered as it is ingested/smoked, or a lot of the "magic" tends to evaporate.  It was still a fun game, don't get me wrong, but we'll be sure the next time around that we plan our time more carefully.

As for the adjusted experience and advancement system, after three scenarios no models have advanced yet.  A number of characters from both warbands will likely gain a new skill or advance after the next scenario, and as forecast, the gradual elevation is satisfying and is doing a good job of keeping everyone on the same page.

Anyway, from hereon in, Sir Thrustam and his companions have one course open to them. If Dick wants any of his questions answered, they must make their way to towards the central location of the campaign - Dertflinghan!

Thanks for reading,
JET
Posted by JET (aka Jason) at 7:57 PM

Bring on the next chapter. This is great stuff and your sets really look the business. Wish my own terrain looked that good.

This is fast becoming the not-to-be-missed top priority on the Blogosphere - can't wait for the next thrilling instalment.....glad you're getting such good gameplay out of it too!

Frankly, I've never felt so important. As for the game, it's truly a great one. I was talking the Marc this evening and he is started his monsters, while I'm about halfway through painting my vampires. I have some general ideas about where the story is headed, but nothing is in stone yet, so who knows where it will end up.