The Curse of the Dertflinghans: Chapter Two 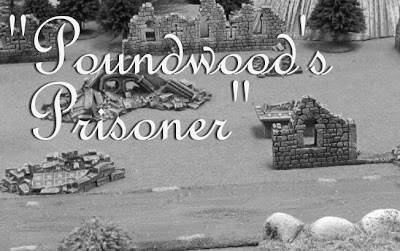 15 April. Old West Road - For the past two days my stalwart companions and I have continued our eastward journey into this mysterious land.  The countryside is quite beautiful and, though it pains me to admit it, supports a vibrant and lush natural canopy that easily completes with my native America.  Yesterday, as we trekked through a particularly hilly and forested stretch of road, we saw a lynx devouring a hare with seasoned efficiency.  Rutter began growling and prepared to challenge the wild cat, but Johann was most insistent that Sir Thrustam hold him back. It seems that the natural hunters of this country are respected by their human counterparts, and as an outsider, I have no wish to question the traditions of our most able guides. 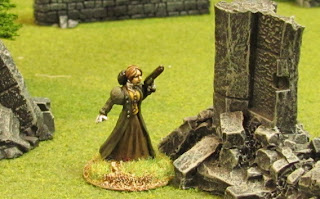 Presently, we are preparing our camp in a forest clearing near a small stream.  Across the road, through the trees, I can see crumbling walls of some medieval ruin.  Johann tells me that it was once a great cathedral, and some centuries ago, enraged townsfolk tore the mighty structure down after discovering that the local bishop had sacrificed a young girl to honour some devilish pact.  The men are pitching tents and organizing our gear, so perhaps a quick investigation is in order.  I'll surely be back before they notice my absence - Emma.

15 April. cont'd - So much has transpired since I left off last that I hardly know where to begin. In the words of my late uncle Amos Poundwood, "Nothing makes for a good start like a good beginning." 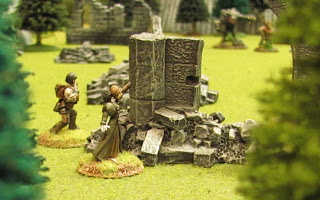 After making my way to the ruins, I perched on a piece of rubble and began some sketches.  There were many carvings on the collapsed columns, some period, and some strange rune-like characters, obviously added by a more recent and yet unbeknownst engraver.  I longed for access to my reference library at Oxford, but here in the field I must make due with knowledge and deduction.  As I pondered the nature of these markings, my reflection was interrupted as I became aware of someone approaching from behind.   I unsheathed my knife and turned to see the Professor advancing cautiously from the woods.  He gestured silence and then pointed across the ruin. 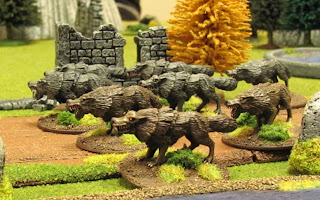 There, in the gathering twilight, we saw the mighty wolf creature who had almost killed our leader a couple of nights earlier, accompanied by the gibbering lunatics who mysteriously follow these canine monsters.  Then, we heard a chorus of howls, and saw to our horror a pack of giant Carpathian wolves on the road speeding in the direction of our camp. These forest hunters seem drawn to the evil creatures.  I fear that the surrounding woods house an infinite untamed army of wolves who await the call of their masters. 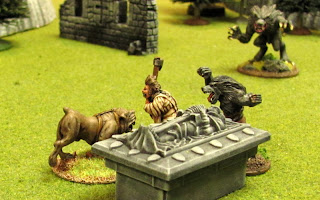 The dark hunters advanced through the ruins and stopped to examine a stone sarcophagus that had apparently survived the collapse of the cathedral.  The carved vessel seemed of great importance to them, and they sniffed about it and marked it in canine fashion (even the lunatic did this, which I found most unsightly).  Then, both the creatures and Prof. Alcock and I were surprised by the arrival of Sir Thrustam's canine companion Rutter, as he charged through the ruins barking savagely at our supernatural enemies.  Not surprisingly, his valiant master followed behind and the brave Prof. Alcock dashed out from our hiding place to join him. 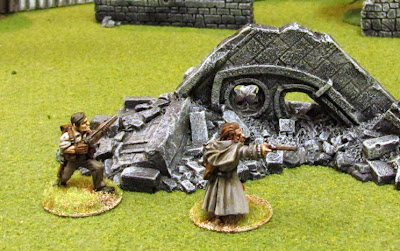 Continuing to prove their dedication and bravery, Johann, Hans, and Egon began shooting at the savage wolves and felled a couple of the brutes, but it seemed a futile exercise.  Before long, the Carpathian hunters were overwhelmed. 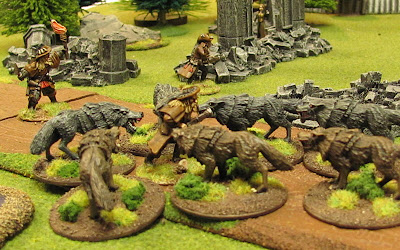 The Great Wolf himself bounded across the ruins with supernatural speed and engaged Hans most savagely.  Seeing the beast unleash his full ferocity on the poor man was a terrifying experience and I fear I almost succumbed to cowardliness myself. 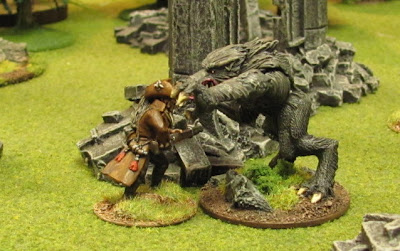 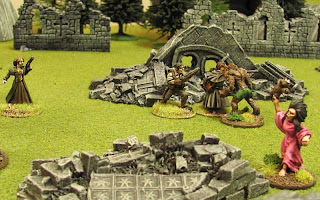 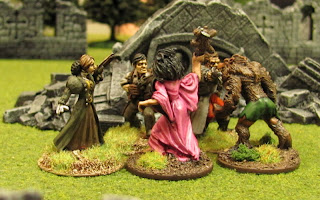 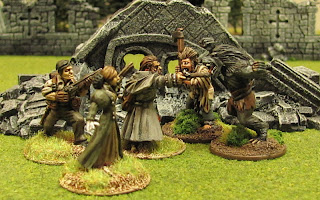 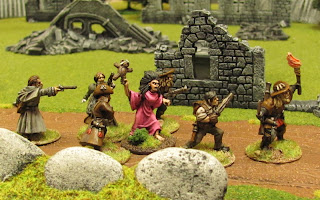 My senses were again assaulted as a desperate cry added itself to the hellish cacophony.  I turned to see the same murderous mad woman from our first encounter charging towards Sir Thrustam and the professor.  The two men were most actively employed in defending themselves from one of the lesser wolfmen, so gathering my resolve, I ran towards the hideous woman with my knife and pistol drawn and ready.  She was a disturbing specimen to say the least with her vacant eyes and horrible stench, but I refused to dishearten my companions through cowardice, and pressed on in spite of her vile aspect.

The brute of a woman displayed superhuman strength and was a most tenacious opponent.  As we tussled I realized that, although she might best me in a contest of pure strength, she was certainly no match for my skill and speed.  In the heat of combat I had a sudden thought, and instead of applying lethal force against the madwoman, I waited for an opportunity, and then, when she had over-extended herself, I brought the butt of my pistol down hard on the back of her head.

The feral woman lay unconscious at my feet and Sir Thrustam had dealt a decisive blow against the canine beast which sent the creature leaping into the darkness. We had no time for recoup our energy, for as soon as our opponents were defeated two new ones  appeared before us.  Without dispensing further details of the melee, suffice it to say that these two were also sent fleeing from the field, and although I was far too captivated by my own labours to observe the outcome, our brave Carpathian companions had dispatched the wolves and saw the Great Wolf follow his wounded brethren into the dark forest.  With the threat driven off once again, we found our way back to camp with my bizarre prisoner in tow.

Sir Thrustam suffered wounds on top of wounds, and I sometimes wonder if the man is not an immortal himself. Thankfully, the Professor's medical knowledge combined with Johann's mastery of folk medicine has seen our fearless leader through his plight yet again.  Egon Fishing was also treated after suffering many claw and bite wounds from the wolf pack.  Prof. Alcock says the man will recover in time, but ordered a rough stretcher made so that we may drag the poor man until he recovers.

It seems most improbable that our supernatural enemies should make any further appearances this night.  We sleep peacefully - Emma.

16 April. Cathedral Ruins - This morning the professor, Sir Thrustam, and I returned to the ruins while the hunters tore down the tents and prepared to continue our travel east.  The professor and I were most curious to examine the sarcophagus more closely in daylight (and without the threat of hell-spawned killers at our heels).  At present, the runes remain a mystery, but I have made some rubbings in my sketchbook to be referred to at a later date if and when further knowledge is gained. 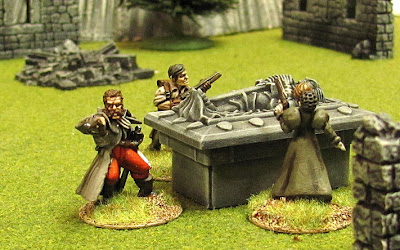 As to our prisoner, she seems flighty and ready to bolt at any moment.  We have bound her arms and shackled her ankle so that possible escape will be unlikely.  I had hoped to question the woman and learn something of these beasts, as well as her affinity for them.  She is less than communicative at present, but we have learned from Johann that we are headed towards an isolated lunatic asylum that is only two days march from our present location.  We shall seek assistance when we reach the hospital, and perhaps some of the mysteries shall be solved - Emma.

And so ends Chapter Two of our Gothic Horror saga.  I quite enjoyed writing the first chapter (as well as this one), but I thought that some discussion of the game itself might come in handy for some readers, especially those who play (or who are planning to play) Chaos In Carpathia. 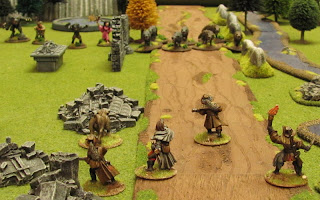 Using Tom Weiss's warband and scenario add-on, we played The Ritual scenario with the special event Grudge Match.  The sarcophagus was a special marker in the game that generated supernatural energy.  By moving into base contact and using a special action (actually, a Mind+Scholar check or a Resolve+Iron Will check), a character could gain extra Fate points to use during the scenario.  More importantly, we decided that the warband who succeeded in tapping the most energy would gain earn experience points to be distributed among his characters in anyway he saw fit.  Prof. Alcock was the only character to succeed in doing this during the game, so Chris won the experience (and drove most of the werewolves from the table), so it was definitely a human victory.

As per my previous post, we made some more alterations to the post-battle sequence and put them to use.  The experience is gaining nice and slowly (which we like), so there won't be any great gaps between the warband's ability levels.  We decided to go back to the standard earning system in the book rather than just focusing on the Mind attribute.  With upkeep costs (as well as the option of trading in earnings for Destiny Points), we found that the warbands were earning a humble amount so it was best not to lessen it.

Everyone survived the post-battle rolls on the injury tables, which was quite lucky for me considering two of my models were coup-de-graced.   Crazy Nell rolled "Captured" (hence her being captured and all) and Egon Fishing rolled "Miss Next Game."  As you probably noticed from the ending, the next scenario will likely take place on the asylum grounds.  I can hardly wait.

That's some wonderful story telling and the pics look just great.Your blog inspired my to start a campaign of my own at our club with a mate.
However,we will be doing Chaos in Cairo with me playing archaeologists and him cultists and I'm really looking forward to it.:-)We will start in America and progress to Egypt.

Inspiring stuff. For years I have followed a similar adventure theme in my sci-fi gaming but never realised it like you have here. Excellent terrain and interesting reads!

Thanks for the replies guys. Hopefully there will be some photos of your games Chris.