The Curse of the Dertflinghans: Chapter Ten 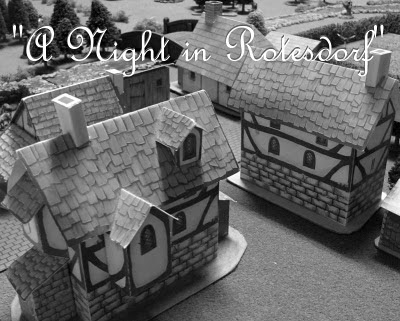 28 April. Village of Rotesdorf - After our hellish encounter with the vampiric children on the night of the 25th, my companions and I were relieved last night to take refuge at the Two Ox Inn in the town of Rotesdorf. Tired and road weary, we supped on a substantial meal consisting mainly of cow tongue, cabbage and a well-ripened cheese. With our bellies full, we retired to our rooms ready for much-needed rest. 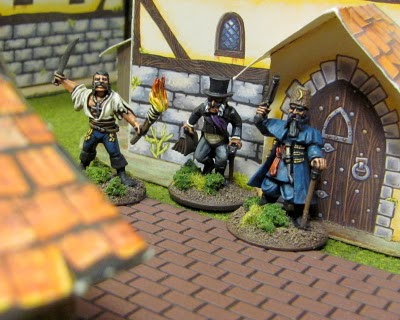 As is customary, Bjorn took the late watch and, much to my surprise, came thrashing on my door in the middle of the night. I ran to let him in and saw that Helmut's door across the hallway was already open and the bustle of dressing hastily could be heard coming from within. Considering Bjorn's past service to my family, I have come to trust both his judgement and his actions. In his quiet matter-of-fact way he simply said, "There's something happening across the bridge sir, our kind of thing." Knowing the type of occurrence he must be referring to I grabbed my hunting equipment and made my way down to the common room where the rest of the party were roused and ready.

At the south east edge of town there is a bridge leading from the town to a forest track that leads well into the shadows of the mountains beyond. From the scrub we could see dark shapes moving. Savage cries and growls carried on the wind, none of them human. 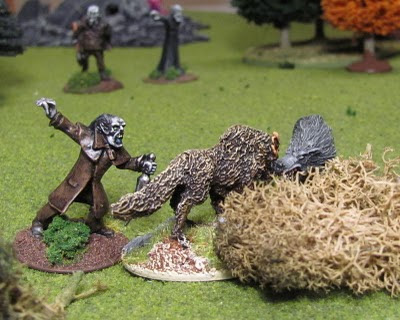 In the midst of the fray we could see two great winged beasts engaged in a bitter melee of tooth and claw. It was hellish to behold but, thanks to my vast experience in the Order, my heart remains stout when it comes to such things. 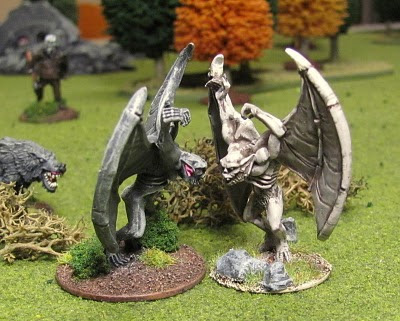 I ordered the party to take cover in the shadows of the buildings. In a short while, the mayhem seemed to subside and, carefully, we began scouting out the area. 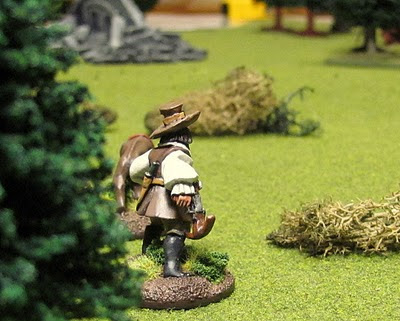 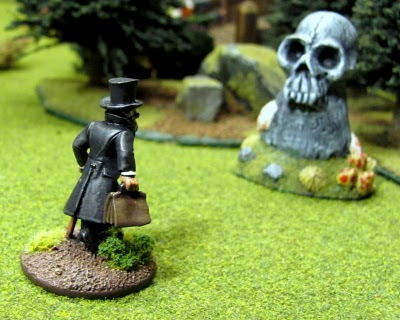 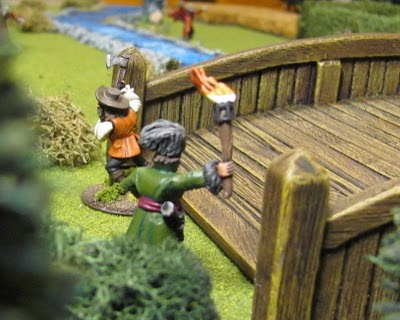 I was examining the riverbed near the bridge when I caught a glimpse of a cloaked figure near the cathedral ruins on the other side of the river. I could hear cries of alarm coming from the darkness and I realized that my companions were likely encountering foul denizens of the night as well. 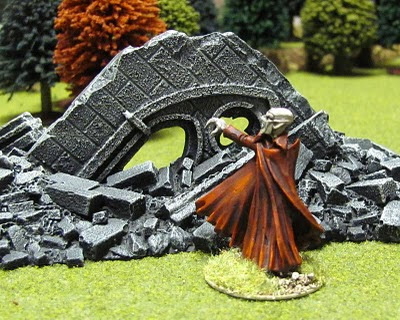 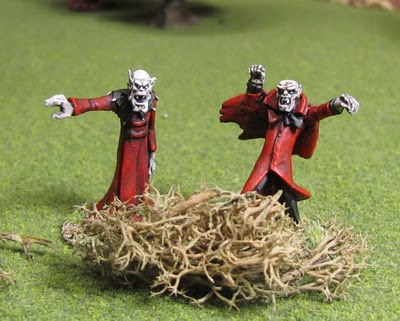 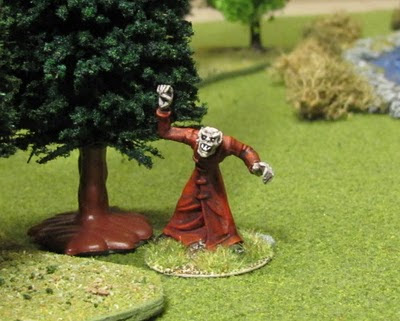 In an instant, the creatures came out of the darkness with murderous intent. However, they were in for something of a surprise. As I ran to join the fight, my son Helmut and the faithful Lazlo were already slashing and cutting with their torches held high. As I came closer and saw that we were indeed dealing with nosferatu, I drew one of the stakes from my coat and moved towards one of the beasts. Although I failed to make a mortal blow with the stake, I think that when the creatures saw that they were not dealing with mere frightened peasants, their resolve started to break. 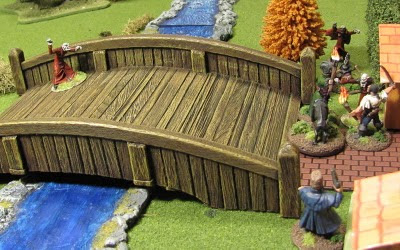 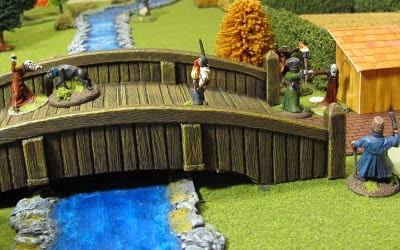 Unfortunately, Dr. Grunberg and Bjorn were caught on the other side of the bridge and, as it turns out, found themselves grappling with the nest master who, as we had seen earlier, again took the form of a giant man-bat. 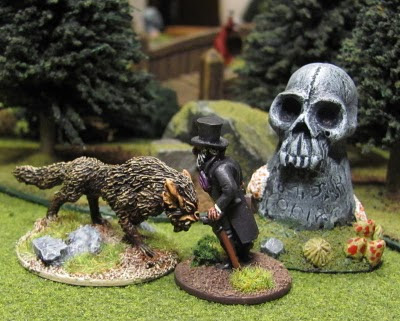 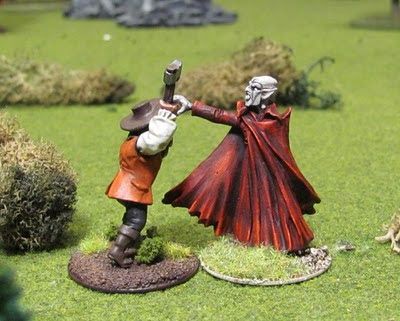 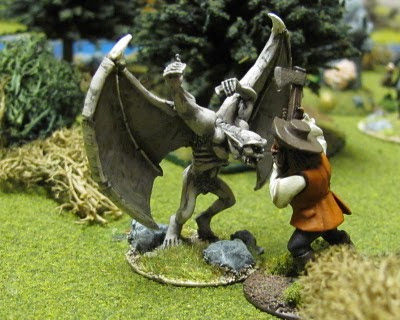 If Helmut and Lazlo had not been so quick to drive the creatures on the bridge cowering into the darkness I fear that the master vampire would have remained until the doctor and Bjorn were killed and maimed. Luckily, seeing the ill fortune of his companions, he leapt into the air and flew off to the east over the treetop canopy.

Thankful that none of the party had come to any serious harm, we made our way back to the inn where, for obvious reasons, sleep was no longer possible. Instead, we filled our rations from the innkeeper's substantial stores and made an early breakfast. As I saddled my own mount, I learned from one of the grooms that my son Hector had passed through Rotesdorf. Invigorated by this knew-found information, we set out in the direction of the unknown, that is to say, in the direction that the nosferatu fled.

Helmut and I were both struck at the nature of the conflict we had witnessed. It is the first time that either of us had seen dark creatures fighting against each other. What could be so important to draw them away from the business of hunting men? It has certainly set my mind in motion.

Finally, I should mention that my good friend the doctor seems strangely distant. On more than one occasion he has seemed about to tell me something and, just as he is about to speak, goes silent and returns to his reveries. I'm sure that, when the time is right, he will tell me what has been troubling him. Until then, we head further east on the trail of the beast and, with God's guidance, towards more answers as to the whereabouts of my dear son -KvK.

I headed over to Chris's house on Saturday past and we managed to fit in two games of Chaos In Carpathia. I took the photos of both games and combined them to create the chapter you have just read.

The first game was a Battle in the Wilderness scenario featuring both of our newly-painted Nosferatu warbands. Chris's band is composed of four vampires and two wolves whereas mine consists of only two vampires and a wolf. However, I made up my numbers with four ghouls. Interestingly, although the ghouls lack many of the lesser vampire's abilities, they are stronger and tougher. If one of Chris's vamps finds itself outnumbered by ghouls it generally ends poorly for the vampire. 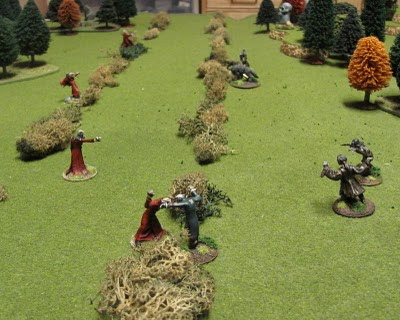 Creatures of the night battling on the forest track. 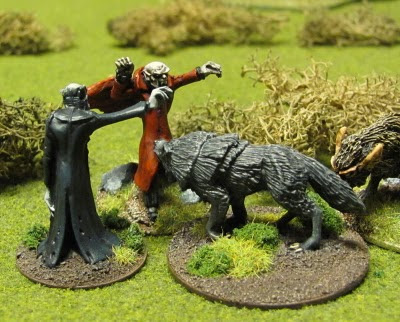 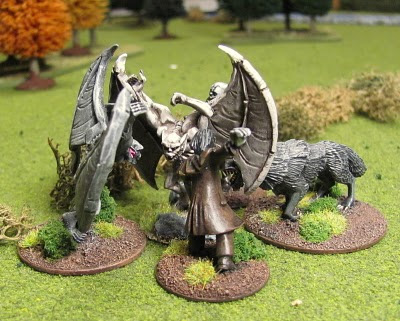 Chris's head vampire finds himself outnumbered.
The second game featured my Hungarians fighting Chris's vampires. This time we played a Seek & Find scenario with five objectives. Although a couple of my warband members went down, in the end my band found and held the majority of the objectives which, in the end, is what counts. 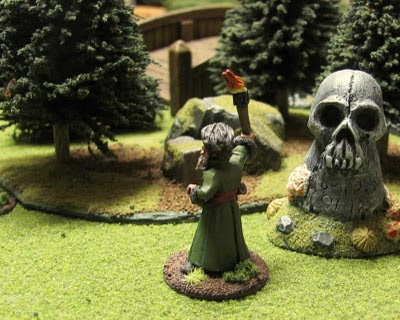 Lazlo strolls past the objective location. With a
MIND of 2, deciphering runes isn't his strength. 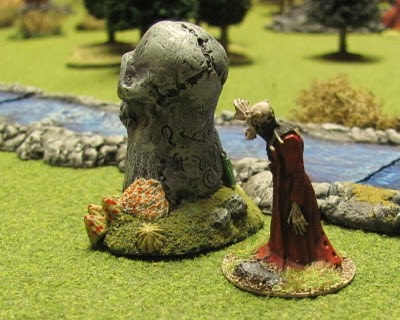 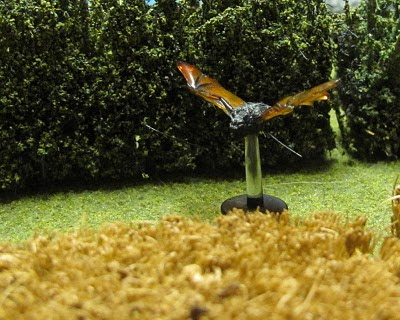 Gideon flies toward another objective in his bat form. 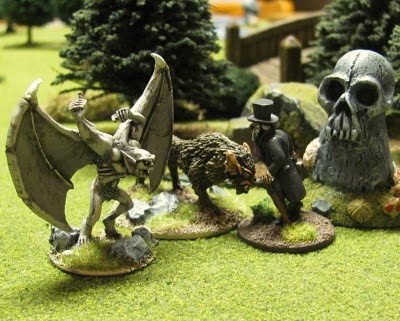 This is where the game ended, with Dr.
Grunberg just escaping a gruesome death.
So, I was completely and utterly victorious. With two major victories under my belt, both of my warbands earned the right to be proud of themselves. More importantly, it was very gratifying to see newly-painted models on the table and, as always, to speak in silly accents.

P.S. If the table looks different, that's because we were playing with Chris's terrain collection and yes, those are long OOP Warhammer cardstock buildings.
Posted by JET (aka Jason) at 9:08 AM