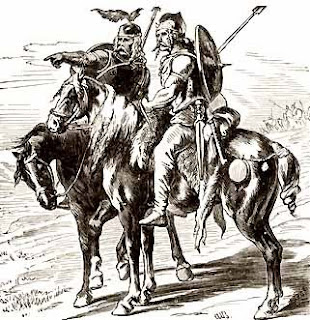 The last couple of months have been very productive for me. In short, I've almost finished everything I had on my plate for Adventure Gaming and Historic Gaming. Thanks to this burst of productivity, as well as some trading and liquidating, I don't really have a lead pile anymore. Furthermore, since I have a collection of models and terrain for all the games I play (and I really don't have time for any new games), I am a geek with nothing (or very little) to paint.

My situation has got me thinking and, after getting some good advice from some seasoned professional painters on TMP, I've decided that I'm going to paint an army to sell. I feel that my greatest strength is 15mm historical miniatures and, since they're also my favourite to paint, that's where I'm starting. I'm embark upon this experimental journey with caution. I'll paint one army to start. If I (a) enjoy it and (b) can sell to a buyer who is willing to pay an agreeable price for the quality of the work, I may do others.

Before I pick up a brush there are two big decisions to be made. The first is, for what system will I paint an army. I was thinking that I would stick to DBA, Basic Impetus, or Impetus. The second decision, of course, is which army to paint. That's where it gets complicated.

Some of my potential choices are "safe" ones; Romans, Greeks, War of the Roses, or something equally as popular. However, I've also considered some choices that you don't see everyday; Dark Age Welsh, Sarmatians, or perhaps an Eastern European medieval army like Hungarians or Albanians.

Anyway, I will come to a decision in the next few days and order some models to try it out. The absolute worse case scenario? I'll be left with a new army in my collection. I could do worse I suppose.

Jason, I think any army you choose to paint will sell well. You have a good following and a good painting style. If it were me, I would do an army for Basic Impetus, possibly EIR as it us popular, then move on down the list of EIR opponents. Good luck with this.

I have two 15mm DBA armies (one Roman and one Slavic of some sort) I'd be happy to send you for the price of postage to get you started.

There are likely enough extras you could also do them as Impetus armies. Need to thin the lead pile and kick starting your business sounds like a good way.

I concur with Chad. Furthermore, I've been thinking about possibly picking up a pair of painted armies for Basic Impetus (which is to say you might have a customer right out of the box). That said, I'm somewhat more partial to the 6-10mm look than 15's. Good luck.

GASP! No lead pile! What does that feel like? I've never been in that situation.
Good luck on your painting and selling endeavour.

Thanks for the input guys. My plan is to try and do a good job and, when it's all done, charge what I think is a fair price. If there's no buyer right away, I'll sit on the army and try again. I'm not particularly interested in speed-painting for a table-top standard.

Bob, that's quite an offer. I'll email you shortly.

Jet and Bob, I'm going to Edrock in August if you need a lead mule.

Hello
Have you got any idea of price for 15mm miniatures ?

Haven't figured out price yet. I'm painting a DBA army for a gent and will soon be starting some armies to sell. I'll have a better idea of price the. I won't be the cheapest gig in town, I can tell you that for sure.