The Mannleighs have always been an adventurous bunch.  For two centuries, Mannleigh Park has served as a staging point for countless exploratory and military expeditions.  Mannleigh men have followed her Majesty into every conflict in which the Empire has participated.  They have been to both Poles, have traversed the jungles of three continents, and have funded and partaken in more archaeological expeditions than perhaps any noble family in Britain.

However, it is the current occupant of the estate, Sir Thrustam Mannleigh, who has taken this adventure lust to a new height.  During a trading expedition to Punjab some years ago, Mannleigh found himself present during the excavation of an ancient crypt.  He encountered something that seemed to defy reason that night; something that he kept to himself until he returned home the following Winter.  When he was back on British soil, Sir Thrustam contacted his old Oxford chum, Dr. Richard Alcock, and summoned him to Mannleigh Park where an all night discussion ensued.

From that point onward, the two have put the legendary Mannleigh fortune to active use as they began an obsessive study of the unknown.  In the past few years, Mannleigh and Alcock (along with the fetching young grad student, Ms. Emma Poundwood) have followed the trail of the Sasquatch in northern Canada, helped to discover the long-lost mystery of Easter Island, and dealt with an unspeakable business in the South Pacific where poor Dick almost lost his life.


The adventurous three (along with Mannleigh's faithful hound, Rutter) are about to embark upon an adventure into the Carpathian mountain range where their resourcefulness and fortitude will be tested like never before.

Dick and Mannleigh attended the same college, rowed for Oxford, and played polo together in their younger years.  Their friendship has rekindled in the past few years thanks to their joint interest in the occult.  Dick was an army surgeon after college, and after six years of service in Asia, he retired from active duty and established a private practice in London.  With all of the travelling lately, it goes without saying that his medical partners are quite over-worked, trying to satisfy the needs of his neglected patients. 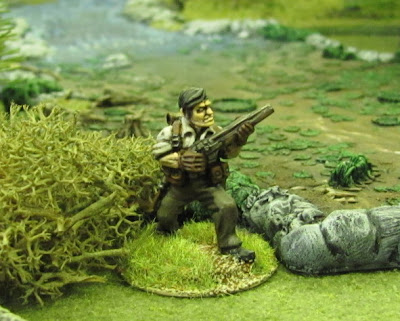 Ms. Emma Poundwood hails from America, where the Poundwood name is well-known in most respectable circles.  After the unfortunate death of her parents she was raised by her uncle, who in addition to allowing her to continue with her academics, took it upon himself to start training her in survival, woodcraft, and target-shooting.  Her interest in the occult led her to Alcock after she read his repudiated article, "Island Resurrectionists: The Lost Art of Zombification in Primitive Ritual Medicine." 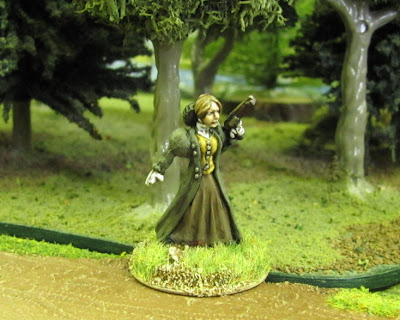 Dick endeavors to bypass a sophisticated locking mechanism to a forgotten archive. 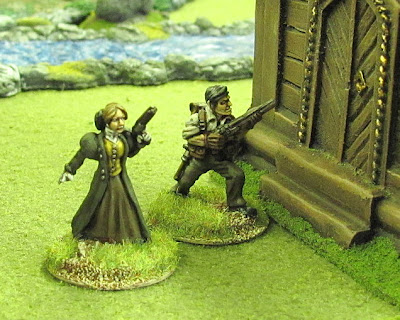 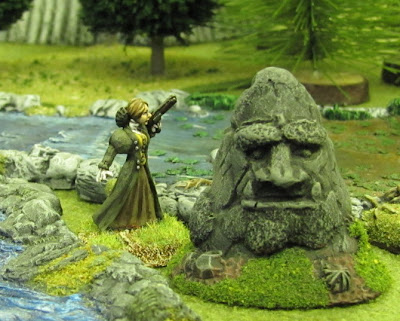 Along with the werewolf hunters Chris painted a little while ago, these models will complete his British/American Monster Hunter warband.  Naming innuendo aside, I think they are a competent-looking bunch.  Sir Thrustam is actually a Westwind Wulfenjager model, while Dick and Emma are hunters from Blue Moon Manufacturing's "I Had Such A Howling Good Time" boxed set.  For those who play Chaos in Carpathia, Sir Thrustam will be fielded as an Intrepid Leader, Richard Alcock as a Professor, and Emma Poundwood as an Adventurous Scholar.

It's difficult for me to be objective about such things, but I would venture to guess that Mannleigh and his companions will have their hands quite full in the near future.

Great stuff and I just love the storyline material!:-)

Your excellent photos and story-telling are always a great enjoyment, many thanks for sharing, again!
Awesome what you achieved with the Blue Moon miniatures; I'm a bit put off by their catalog pics, but particularly the lady looks quite nice. Certainly I had use for her in my upcoming Victorian Age adventures... *oops*

Pun overload... Pun overload! Lovely names there, I'm sure there's many a Freudian Slip among these intrepid adventurers. Nice paint jobs, and the basing is seemless with the terrain.

Fantastic minis, as usual there, and a nice back story for the characters too...are you sure you shouldn't be writing screenplays/novels on the side....I'd pay to see the adventures of types such as these in print....BTW, perhaps Alcock served with a medical officer called Watson in Afghanistan during the 1880s? Apparently he's hooked up with some consulting detective chap in London these days.... ;-).

I will humbly take the credit for the story and photos, but the Blue Moon figures were painted by Chris. I agree with you - his paint job is certainly more flattering than the one's on BM's site.

"perhaps Alcock served with a medical officer called Watson in Afghanistan during the 1880s? "

Thanks for the kind words,
JET

Loved it when you posted this on LAF cant believe iev only made to your blog.