We had a relaxing day of gaming today and the first order of business was a game of Warmachine against that wiley Master of Menoth, the incomparable Kenoth of Menoth.  I was using a jack-heavy force while Ken primarily ran warjacks backed-up by a maximum unit of TFG, a choir, and a couple of solos.
We both advanced towards each other fairly aggressively, neither of us doing much damage to the other during the first couple of turns. 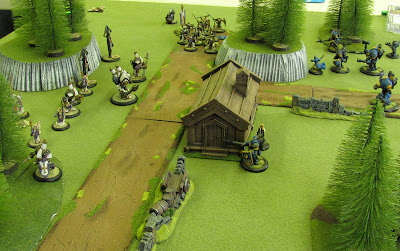 I tried arcing some spells into the TFG, but sine I was getting nowhere with it, I decided to sacrifice one of my Lancers.  It worked out, and the Flameguard were pretty much tied up for the entire game. 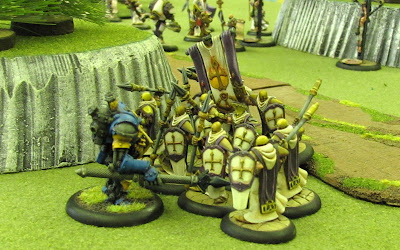 The battlegroups clashed on the roadway.  I was trying to take out, or at the very least, to occupy Ken's arc nodes, and in doing so, essentially neutering Severious's ability to deal any damage at range. 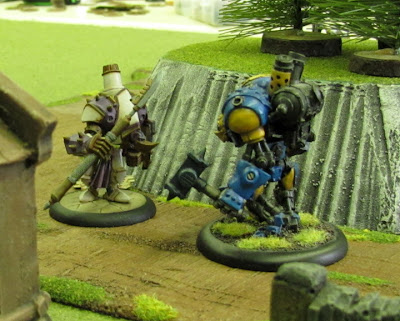 My other Lancer was Haley's bonded warjack which meant that it had extra movement.  I decided to throw it out there, hoping that I might get the chance to make a smack at Sevvy. 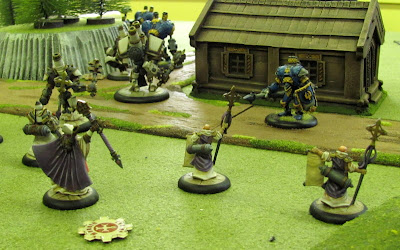 Meanwhile, Ken was smashing up my center fairly handily. 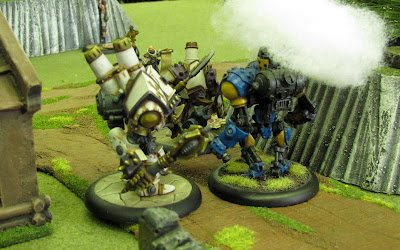 There were some more blows dealt from either side, but in the end, I managed to get the Lancer right up there and reduce Severius to one wound. 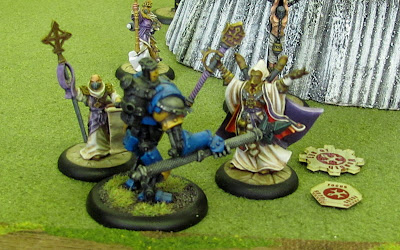 Ken made a break for it and tried to gun for Haley.  The attempt failed and the bonded Lancer came up from behind and skewered the Menoth caster much like a holy white marshmellow. 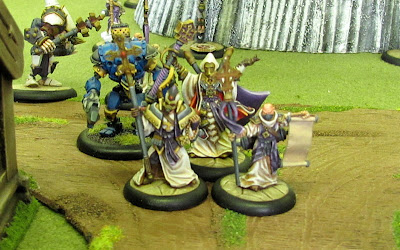 It was a great game with little to no downtime.  I quickly lose interest in Warmachine games that drag on much past an hour and  a half.  This one was anything but boring, and I think that both Ken and I felt that we left the other no room for error.  I was quite surprised that the Lancer survived long enough to go for the kill, but a combination of taking down Severious's arc nodes, and perhaps using my feat at the right time, allowed me to line up all the necessary pieces when they were needed.  Sevvy is an effective (and scary) caster, but because of his relatively low defense, armour, and wounds, when a warjack gets close to him, it generally tends to be lights out.

I am loving your terrain- nice report!

Thanks! I'm trying to keep them short and focused these days, just to portray the primary events of the game.

The building is a eastern european longhouse from Hovels Ltd. in the UK.

Nice report, sorry I missed the game itself... I'll be there next weekend though!