I was pondering going with the title "Jason, Are you trying to get a divorce before your baby is born?", but it was too damn long. Here's a quick lesson for all of you gents out there - find a way to combine your geek activities with your quality "father-son" time and everybody wins. My son and I get to spend some fun times together and let's face it... the ladies just love that stuff.

All joking aside, some of you may have picked up on some of my allusions to my almost 10-year old son Ben and our excursions into the world of geekery. We played some Song of Blades and Heroes around a year or so ago, and more recently, we've been having a real blast playing Memoir'44 and Basic Impetus. Lately, however, I've been seriously pondering what project we could do together. He doesn't have a whole lot of interest in painting models right now, but he is quite interested when he watches me make buildings and terrain bits. As some of us have just started playing Chaos in Carpathia recently, I saw how great the Goal System was, and thought that Ben would enjoy it. Horror, however is not a genre that I'll be encouraging my son into anytime soon (He has enough nightmares already).

And then it hit me... Scott Pyle's Supersystem rules. Here was a goal-system game (check) in the superhero genre (check check) that was available as a cheap PDF download (check check check). We were officially in business. 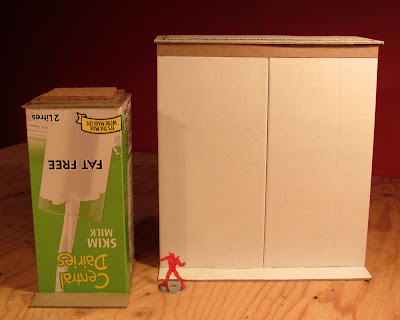 As you can see above, we've started making a couple of buildings. With Ben's assistance, I will oversee most of the construction, and after teaching him the basics of overbrushing and drybrushing, I will set him loose on the buildings while I paint the models. Over the next week, around 10 or so co-workers will be bringing me all of their empty milk cartons. :) 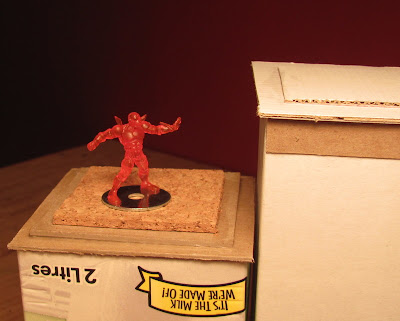 Here's Ironman getting ready to blast the side out of this building. The models were bought at Wal-mart. They are a fairly hard soft plastic (you know what I mean) and are sold by Hasbro. I think they are called Handful of Heroes or something like that. You get eight in a pack for around $6.00. I bought three packs, so we have lots of superheroes and arch-villains. I'll paint up enough to get us going after Ben starts getting some paint on the city.

I started painting the Hulk just to get an idea of how the paint would adhere. I treated it just like any other 28mm model - file off mold lines, spray-prime black, and start painting. This guy is at the "10-minutes of effort stage," and I think a couple of quick highlights will make him look quite "smashing." ("Keep yer eye on the ball son... eye.. ball... That's a joke son ;) ) I won't be putting the same level of effort into these as I do with my personal 28mm models. 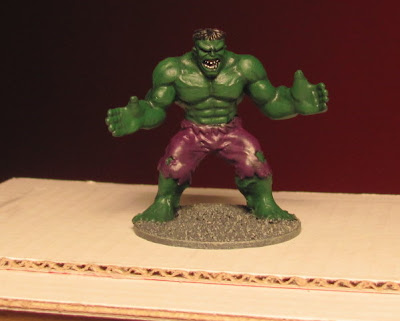 I think we'll bring this one to fruition within the next 4 to 6 weeks. The important thing to remember here is that most of this is a kid's project. I want Ben to do most of the terrain-painting on his own, and when it's all said and done, the buildings and the models will be his, to use how and when he chooses, without my supervision.

Always exciting to see how you embark on a new project. And the father-son aspect of this one makes it even more interesting.

Nice idea! My son is named after a superhero (Benjamin Grimm aka Thing from the Fantastic Four). I hope that he will follow in my footsteps and be drawn toward miniature games.