With the start of our Chaos in Carpathia campaign a few weeks away, I finally took the time to nail down a starting warband. After much deliberation, here's what I came up with. 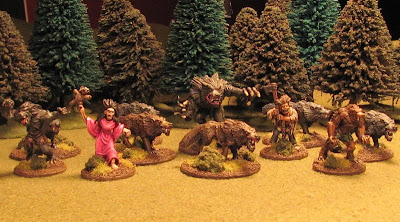 I was originally going to start the campaign without any inmates in my warband. I had planned to add them later as I earned some post-battle resources. However, after painting a couple up, I couldn't resist including them. I think they'll add a little bit of that human character to my warband which will certainly help me to propel the story.

I also used the optional werewolf upgrades in an attempt to specialize them for different tasks. With an extra Vitality upgrade, Agility upgrade, and the Terrifying Aura ability, the Great Wolf should have some staying power, as well as the ability to really rip the enemy apart. I gave Blackmaw an extra Vitality and the Iron Will ability to represent his supernatural toughness. Finally, to help him live up to his name, I gave Bloodrunner an extra Agility upgrade and both the Speed Burst and Dodge abilities. Hopefully, those pesky wulfenjager will have a hard time hitting him with their rifles and he will be perfectly suited for flying out behind buildings and tearing their faces off.

In the very near future, I'll finally have the opportunity to put some of these theories to the test. Stay tuned, and as always...

I love this warband, plenty of character...and bite. I'm eager to follow along the campaign when it starts!

With any luck, you won't have too long to wait. I'm hoping that by the Easter weekend (or the first weekend in April) things will be under full swing.