It's been a busy week at home and at work, but I wanted to show you folks that I'm still trying to get something accomplished. Now that I've finished painting my werewolf warband, I thought that it was time to start working on some models to populate our imaginary version of Eastern Europe. 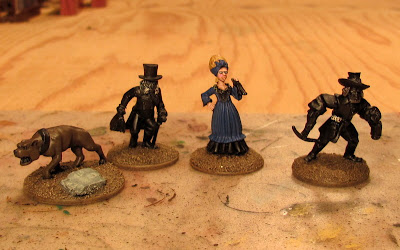 The above models are going to pose as characters of Grunberg's Asylum (and later on, will partially form my Hungarian Monster Hunter warband - but that's another story). I don't have all of the names yet, but you are looking at the good doctor, his niece, and the groundskeeper and his hound.

As to the female model; don't as me what the heck is going on with her lips. She looks like she bought botox from a shady street vendor. I admit that some of it might be my lack of painting experience when it comes to tarted-up lady models. However, it is a model from an older Blue Moon Americana range (I think), and I wonder if the sculpting of the puffy lips isn't part of the problem. In any event, I'm very open to suggestions.


So, how much more modelling and painting is left in this Gothic Horror project anyway?

A worthwhile question, and I'm going to formulate a written answer, partly to satisfy the curiosity of horror fans, and partly to help me map out what's left to do.

Part one of the project is, of course, painting the models for the warbands I want to play. I've already painted all of the lycanthropes, wolves, and lunatics I need to play werewolves. In the relatively near future, I plan on painting a Romanian Vampire warband (around 6 or 7 models), and later on I'll be putting together the Hungarians as mentioned above.

Part two of the project consists of the preparation and completion of the models and terrain items necessary to create the world in which we will play. Some of you have already seen the various buildings, Gothic terrain items, and doodads I've been working on. I still want to make a few small items, as well as a largish ruined temple (for the Ritual scenario) and some underground "dungeon" tiles so that we can play the Crypt scenario, as well as other parts of the campaign when adventurers find secret entrances, trap doors, and so on.

The card and plastic furniture pictured below is from the GW game HeroQuest. I bought it around 20 years ago or more and have decided that I'll be repainting it all so that we can play scenarios underground, as well as in cellars, castles, and other indoor locations. 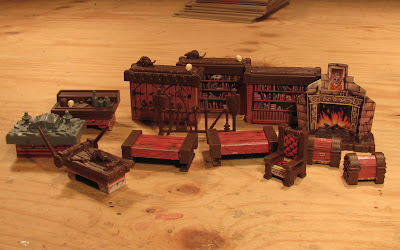 For now, the immediate goal is to finish the four models shown above, as well as five inhabitants of Dertflinghan so that we can use the mob rules when playing Terror in a Tiny Town. When I finish the asylum models it'll be time for another Gothic Horror Gallery update.

Never fail with scenic items, may it be civilians or furniture. Very cool stuff! Female figures are always an issue; only a few sculptors get them right. Anyway, I think this particular model (and your painting) is appropriate to the 'caricatured' setting of Gothic Horror.
Additionally, thanks for the interesting insights in your planning. I like to read about how you develop your projects.

I'm enjoying following this project,because lately I find myself being drawn to the more unusual periods or backgrounds.:-)